In a meeting with a group of poets 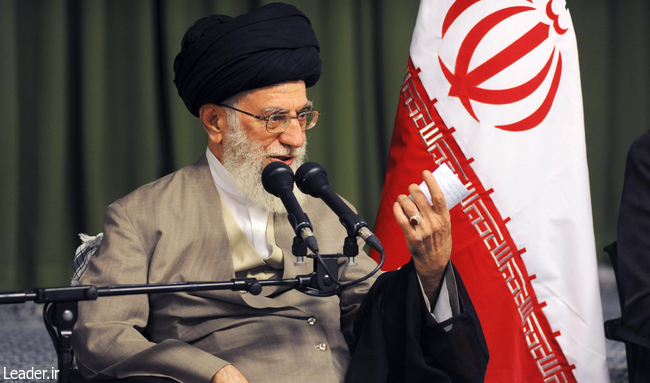 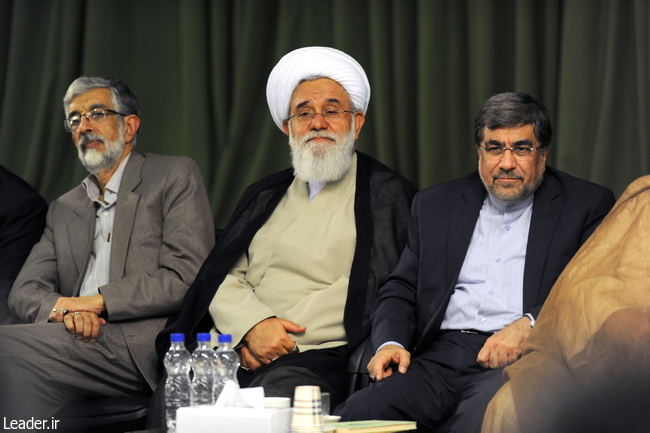 On the eve of the birthday of Hadhrat Imam Hassan Mojtaba (AS), the second Shia imam, a group of cultural figures, professors of poetry and Persian literature, young and veteran Iranian poets as well as a number of poets from Pakistan, India and Afghanistan met with Leader of the Islamic Revolution Ayatollah Seyyed Ali Khamenei.

In this meeting, Ayatollah Khamenei described poets as the valuable assets and treasures for the country. Underlining the necessity of “to-the-point, timely and purposeful poets about the country’s main issues and needs”, the Leader of the Islamic Revolution said: “Today, another war, of soft nature, [that is] a political and cultural combat is being waged and in this confrontation, poetry must fulfill its obligations as an effective tool.”

Ayatollah Khamenei glorified and commemorated the late poet Hamid Sabzevari for his talent in poetry and his mastery of poetic words, saying: “The outstanding feature of the late Sabzevari was his influential, high-quality and up-to-date anthems.”

The Leader of the Islamic Revolution said anthems were the most effective genre of poetry, adding: “The pace [of] learning and the spread of anthems among the public is higher than other types of poetry and anthems penetrate the society like fresh and spring air. Therefore, by producing good anthems and promoting them appropriately, the current shortages and vacuum in this sector must be made up for [and filled].”

Ayatollah Khamenei went on to elucidate the standing and responsibility of poetry, saying poets are among the dearest and the most sumptuous assets of the country. Ayatollah Khamenei added: “These assets must jump to the fray and meet the country’s needs under circumstances in which the country would need help in such issues as political and cultural issues, public communications and social bonds and confrontation with foreign enemies.”

The Leader of the Islamic Revolution stressed: “Poetry must be to the point and take stances vis-à-vis the country’s current issues and needs.”

Stressing the necessity of promoting to-the-point and purposeful poems and anthems on a large scale, and the responsibility of the Islamic Republic of Iran Broadcasting (IRIB) and other relevant bodies, Ayatollah Khamenei said: “Compared with the past, today, poems about Palestine, Yemen, Bahrain, Sacred Defense (1980-1988 Iraq-Iran War), martyred frogmen, martyred defenders of the holy shrines (in Syria) or the innocence of combatants like the oppressed cleric, Sheikh Zakzaky, the courageous and determined sheikh of Nigeria, are more to the point and outstanding, but unfortunately, these effective and morale-boosting poems are not promoted and reflected appropriately and there is negligence in this regard.”

The Leader of the Islamic Revolution said “expressing the Americans’ instances of treason in the issue of JCPOA” (Joint Comprehensive Plan of Action which refers to Iran’s 2015 nuclear agreement with six world powers) as another domain for to-the-point poetry, adding: “In addition to politicians, artists and particularly poets must communicate these facts to public opinion.”

Criticizing some wrong measures with regard to promoting and praising faithless and irresponsible artists, Ayatollah Khamenei said: “Unfortunately, sometimes, someone who has not shown the minimum tendency to the concepts of Islam and the [1979] Islamic Revolution is praised while an artist who has devoted all his life and artistic skills to Islam and the Revolution does not receive any praise and is ignored.”

Another piece of advice by the Leader of the Islamic Revolution was “to take advantage of the opportunity of the attention paid by people and youth to widely-used poems like dirges and elegies.”
Citing substantive and passionate dirges recited during years of struggle against the former Shah regime and also during the Sacred Defense, Ayatollah Khamenei said: “Of course, today’s battlefield and war differ from the [anti-Shah] struggles and the early years of the Revolution, and today we are fighting in the battlefield of soft war, political, cultural and security war, and countering infiltration. In these fields, thoughts and wills are fighting and one of the main and effective tools in this battle is poetry.”

The next pieces of advice mentioned by the Leader of the Islamic Revolution during the cordial meeting with the poets included laying emphasis on “compiling, translating and publishing subject-oriented poems on such issues as Palestine, Sacred Defense, [Middle East] region, Yemen”, “changing the contents and words of prayers and religious texts into poem” and “reciting substantive and influential poems with the objective of transmitting the teachings of the impeccable [Shia] imams, Peace be Upon Them”.

At the opening of the meeting, 23 poets recited their poems to the Leader of the Islamic Revolution. Evening prayers were also led by Ayatollah Khamenei, after which the poets broke their fast along with the Leader.