In a meeting with hundreds of students 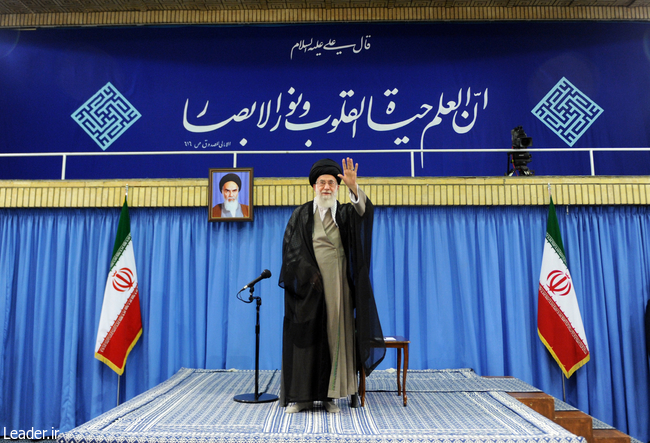 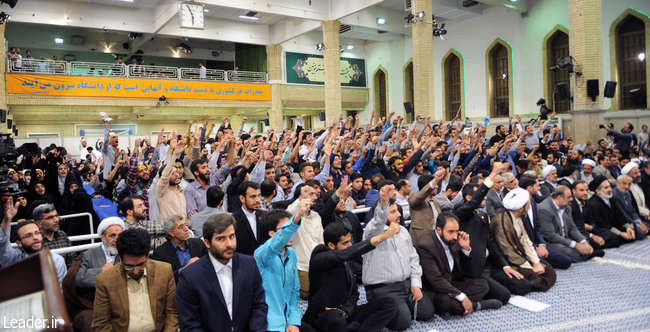 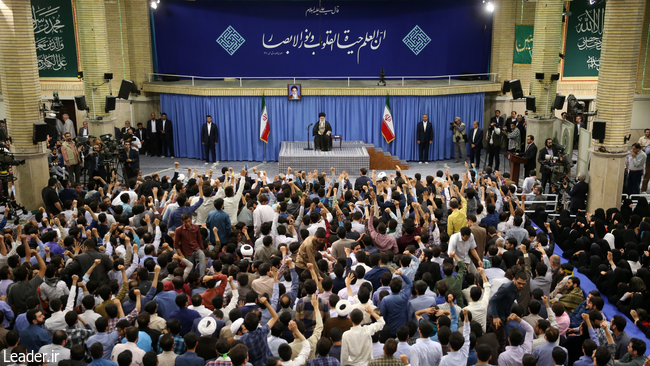 More than one thousand students, including representatives of different student unions, in an almost five-hour cordial meeting on Saturday with Leader of the Islamic Revolution Ayatollah Seyyed Ali Khamenei, spoke about student-life, cultural, social, political and economic concerns of the younger generation and heard directly the views of the Leader of the Islamic Revolution about “student and academic issues, important tasks of students with regard to the resistance of the nation as well as a variety of topics and issues of the day”.

At the beginning of his remarks, the Leader of the Islamic Revolution noted that annual meetings held with students during the holy fasting month of Ramadan are really appealing and favorable, saying: "Diverse issues and different viewpoints that were raised in the meeting were good and attractive and indicate the growth of the intellectual level and the demands of students, and shows that with the turn of time, revolutionary motivations and bright thinking and well-founded argumentation have enjoyed significant and daily-increasing growth among the students."

Ayatollah Khamenei recommended students to further familiarize with the holy Quran and prayers, saying: “My main point with you, students, is to strengthen faith because only with strong faith can one combat and resist problems and pressures.”

The Leader of the Islamic Revolution drew a parallel between the current special and sensitive circumstances in the country and the Battle of Ahzab (parties) in the lifetime of Prophet Muhammad (Peace Be Upon Him), adding: “Today also, all mammonists and bullying powers in the world are arraying troops against the Islamic Republic of Iran and are targeting it from all fronts.”
“Under such circumstances, those with weak faith and perhaps inner tendencies toward the enemy express disappointment and disillusionment and inferiority, but people with strong faith resist with firmer determination and will, no matter how difficult the conditions are,” said Ayatollah Khamenei.
The Leader of the Islamic Revolution said: “If we want to resist the Arrogant Front and achieve the dignity and honor which the Islamic Republic establishment deserves we need to preserve and strengthen piety in our personal and public behaviors.”
Citing verses from the holy Quran about the decadence of future generations in the faithful nations, Ayatollah Khamenei said: “‘Spoiling daily prayers’ and ‘following carnal desires’ are the two main factors of decadence and weakening of steadfastness and combat.”
“The reason for which I constantly notify officials of preventing the holding of mixed student trips relies on this basis, because flouting religious restrictions and constraints weakens the inner faith,” said the Leader of the Islamic Revolution.

After elucidating the role of faith in resistance, Ayatollah Khamenei referred to the “fateful and inevitable combat of the Iranian nation with the Arrogant Front” and said: “The beginning of this fight was where the Iranian nation decided to become independent and advanced and this issue is incompatible with the interests of dominant world powers.”

Ayatollah Khamenei dismissed as superficial and not thought-out remarks by certain people that the Islamic Republic is seeking pretexts for incompatibility with world powers, adding: “This fight does not need any pretext because this fight goes on as long as the Iranian nation is standing [firm] based on its revolutionary zeal and background and Islam[ic beliefs] and it (this fight) will end in two fates; either the Islamic Republic becomes so powerful and capable that the opposite party will not dare launch any aggression or the Islamic Republic will lose its identity and will be left with a spiritless appearance.”
Noting that the first option, i.e. “acquiring full authority”, is envisaged by the Iranian nation, the Leader of the Islamic Revolution said: “Of course today the policies of the United States may be seeking to make a distinction between the Islamic establishment officials and divide them as good and bad officials, but if the Americans get powerful enough they will even consider the so-called good officials as bad ones.”
Ayatollah Khamenei said the very principle and the identity of the Islamic establishment’s ipseity was the main target of the enemies’ fight with the Iranian nation, adding: “By Islamic establishment, we mean the entire structure of the establishment and its values and objectives like justice, scientific progress, ethics, democracy, abidance by law and idealism.”
Laying emphasis on the point that this fight is facing big problems that could be resolved through resistance and foresight, the Leader of the Islamic Revolution said: “Throughout this fight and also throughout the resolution of problems, the students, as the very essence of the capabilities of the nation, enjoy a special standing and have a special role.”
The Leader of the Islamic Revolution described the “students’ demanding behavior” as very important and noted: “It will be up to high-ranking officials to resolve the country’s major problems, but the students’ demanding behavior, if accompanied with studying and precise and correct information, will definitely pave the way for further efforts by officials to resolve the problems.”
Ayatollah Khamenei referred to some issues the students highlighted in the meeting, including the issue of new oil contracts, saying: “As long as the necessary amendments are not made to these contracts within the framework of the country’s interests, no such agreements will be signed.”
The Leader of the Islamic Revolution referred to some criticisms raised by students about the current decision-making by some organs in the country, saying: “According to the law and logic, the Leader cannot interfere with minor and executive decision-makings of organs and if executive officials go the wrong way Majlis (parliament) must use such regulatory tools as impeachment or the president must block the implementation of the erroneous decisions.”
“Of course, if the Leader feels that in certain cases, some actions even minor ones are likely to cause the deviation of the [Islamic] establishment from the right path, he has to intervene and stop that plan,” said Ayatollah Khamenei.
The Leader of the Islamic Revolution referred to the problems stemming from combat and resistance in the country’s national drive, saying: “In this regard, certain issues like boosting the economy and enhancing defense capabilities are among the major issues in the country and it will be up to officials to make them materialize and resolve their problems.”
“Certain problems are internal, for which student unions must rush to offer solutions to help officials,” said Ayatollah Khamenei.
The Leader of the Islamic Revolution said a key to the resolution of the problems was distancing from disillusionment and fatigue and told student unions: “If you resist and, by mobilizing people’s minds, change demands into public discourse the officials will have to respond to your demands.”
Ayatollah Khamenei also referred to a point raised by one of the students about the negative consequences of speaking against the remarks of the Leader, saying: “We have said time and against that speaking against the Leader does not amount to an offense, nor will it face opposition.”
The Leader of the Islamic Revolution went on to describe the country’s students as a big opportunity, major asset and a strong point for the Islamic establishment. Underscoring the necessity for officials to pay special attention to this stratum in planning, Ayatollah Khamenei said: “Compared with students in the very early days of the [1979 Islamic] Revolution, today’s students are of higher standing [both] quantitatively and qualitatively and have more deep-seated revolutionary and Islamic thoughts.”

“Many of highly motivated and revolutionary students of the immediate post-revolution years are today among the country’s researchers and scientists. Therefore, there is no contradiction between being revolutionary and studying,” said the Leader of the Islamic Revolution.
Ayatollah Khamenei recommended students to be studious while bolstering their faith and spirituality, and said: “Students must be also endowed with insight and look at student environments and the issues and developments of the country, the region and the world with open eyes.”
The Leader of the Islamic Revolution said: “In the absence of open eyes and insight, student are susceptible to making  mistakes and calculation errors in distinguishing friends from foes or in analyzing regional and international affairs.”
Ayatollah Khamenei called on students to develop “suspicions about the enemy’s media campaign”, saying: “Having spent exorbitant costs, the enemies have embarked on a complicated and extensive media campaign against the Islamic establishment and its main objective is to cover up the strong points of the Islamic Republic and highlight certain negative points in a bid to insinuate despair and disillusionment into the minds of people and youth.”
The Leader of the Islamic Revolution said foreign media’s refusal to provide adequate coverage of the massive and lively presence of people in International Quds Day rallies this year as an example of the enemy media stream’s behavior, saying: “The Quds Day rally on Friday by fasting people in very hot weather is really phenomenal, but this distinctive phenomenon was not reflected as it should have been in foreign media, while if there is a negative point they magnify it hundreds of times.”