World arrogance seeks to strip Iranian nation of its power 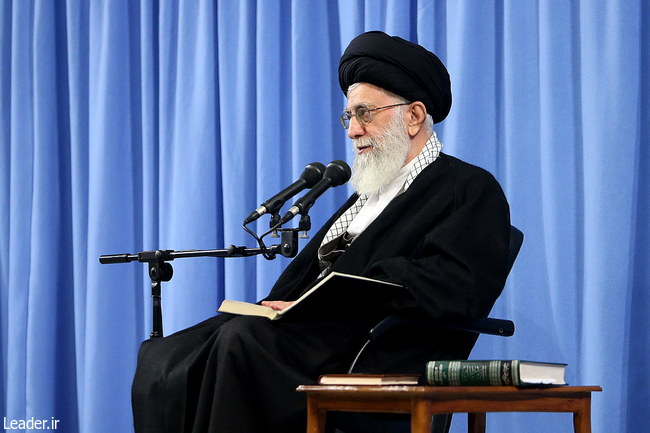 Leader of the Islamic Revolution Ayatollah Seyyed Ali Khamenei has told a group of seminary students on the occasion of the anniversary of huge popular demonstrations in support of the Islamic establishment, which occurred on the 9th day of the Iranian month of Dei in the Iranian year, 1388 (December 30, 2009), that what happened on that day was an example of the power of the Islamic Republic. Speaking at the beginning of an advanced course on Islamic jurisprudence on Tuesday, the Leader also referred to the age-old hostility and practical spite of arrogant powers against the rule of Islam and their effort to strip the Islamic establishment of its power components. The Leader then said, “Today, the geometry of the confrontation of arrogant powers with the Islamic Republic is aimed at taking away the material and spiritual power as well as the resolve and determination of the Iranian nation, but on the opposite, this power must be preserved and bolstered day by day.

Ayatollah Khamenei referred to a narration from the Revered Prophet [of Islam] (PBUH), noting that having power guarantees the well-being and happiness of human societies. The Leader added, “Arrogant powers such as America, seek happiness of the society and [realization of] what they call ‘American values’ through amassing wealth and dominating the [entire] world, but Islam believes that the way to human happiness is through achieving human virtues and [ensuring] the [continuous] flow of the Quranic thought and action in all parts of the society.”

The Leader of the Islamic Revolution noted that the existence of a political establishment stemming from Islam and endowed with power and influence in various issues of the region is a factor that elicits the hostility and grudge of global powers. Ayatollah Khamenei added, “The arrogant system is opposed to any kind of thinking and current, which is against oppression and discrimination across the globe, but it only stands against a current with full force when that current has been able to create waves in the ocean of a nation.”

The Leader mentioned strong opposition to the arrogant system by an Iran, which is endowed with “abundant natural and human and economic resources in addition to political say and logic and audience, as well as competent military tools and force” as the root cause of various forms of conspiracies and hostilities against the Islamic Republic. Ayatollah Khamenei then noted, “In the face of such hostilities, the Islamic Republic must increase its power and this is why frequent emphasis is put on [the necessity for] increasing domestic power and [boosting] the strength of internal structure [of the Islamic establishment].”
The Leader of the Islamic Revolution underlined the need for Iran to be equipped with all kinds of power, including “intellectual, economic, social and popular mobilization,” adding, “Pouring into streets by millions of people on the 22nd [day] of [the Iranian calendar month of] Bahman (which usually falls on February 11) after about 40 years that have lapsed since [the victory of] the Islamic Revolution, is a sign of the Islamic establishment’s power to mobilize people, and this issue has no parallel in the world.”

Referring to the enemies’ ploy and conspiracy to take away the power components of the Islamic establishment, the Leader said, “The enemy is like a burglar, who aims to take control of a house, but he makes it appear as though the reason behind his hostility is the weapon that the landlord possesses in order to defend himself, and [falsely claims that] if he [the landlord] lays down that weapon, the fight would be over. Therefore, he tries through deception and by taking advantage of all kinds of methods, including by talking, joking, smiling and browbeating, to disarm the landlord and enter the house.”
Ayatollah Khamenei also opined that the happiness and misery of any nation depend on how it takes advantage of its power. Explaining about the power arising from possessing nuclear weapons, the Leader said, “The prohibition on [developing] nuclear weapons has very important jurisprudential and rational fundaments, but it is possible for the [Iranian] government and nation to make efforts to attain other forms of power.”