The Leader in meeting with Tehran Province seminary: 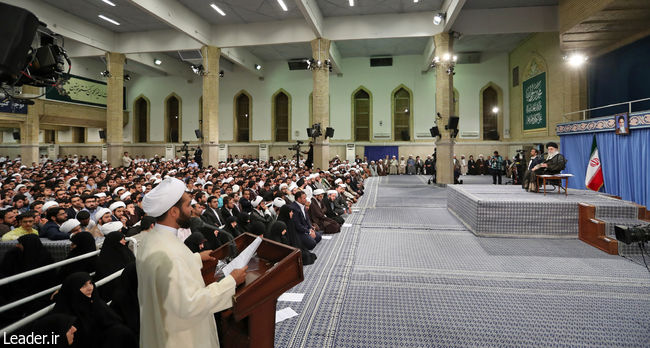 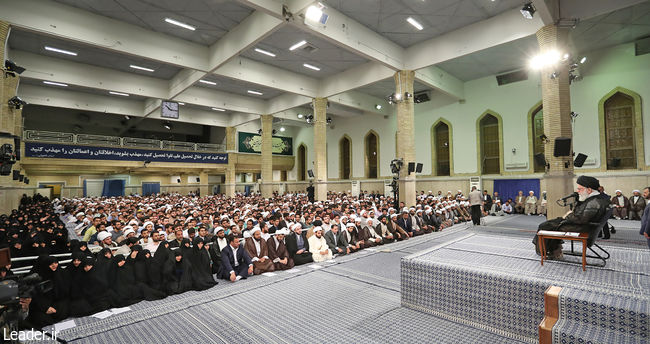 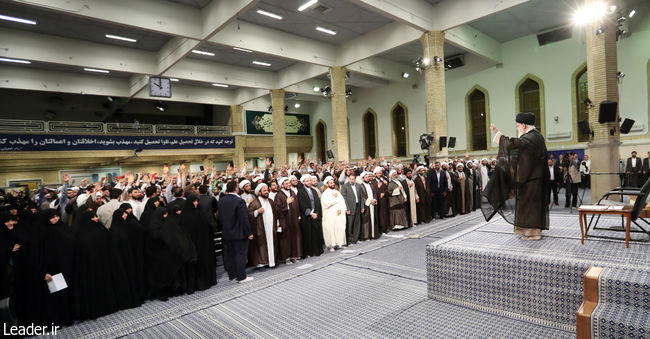 In a three-hour meeting this morning (Monday) with a group of scholars and students of theIslamic seminary of Tehran Province on the threshold of the beginning of the academic year in theology colleges, Leader of the Islamic Revolution Ayatollah Seyyed Ali Khamenei pointed to the advantages and characteristics of the era of the rule of the Islamic order for the fulfillment of the main responsibilities and duties of the clergy, reiterating, “Nowadays, humanity, particularly the younger generation, strongly needs new propositions and Islam has new and appealing things to say with regard to humanity, society and politics, which, if brought to the attention of the world, would be embraced by many.”

In the session, Ayatollah Khamenei expressed pleasure with his meeting with young seminarians and hearing their encouraging and good remarks, adding, “You, young seminarians are like the high-reaching saplings of the garden of Imamate (leadership) and Wilayat (authority) and your intellectual progress and the growth of your practical capabilities will astound those who nurture you and enrage enemies.”

Pointing to a verse from the Holy Quran about the fury of the infidels at prominent Islamic growths, the Leader of the Islamic Revolution said, “If the enemies of Islam and the rule of the Quran are not infuriated by our presence, determination and advance, we should doubt out usefulness.”

The Leader of the Islamic Revolution said the clergy continue to fulfill the responsibilities of prophets and reiterated, “Just as the prophets were seeking to create the grounds for the rule of a monotheistic worldview and the creation of Holy Life, the most important responsibility of the clergy is also the fulfillment of this duty.”

Ayatollah Khamenei said, “The creation of Holy Life will definitely have opponents just as there also were opponents against the prophets; therefore, the clergy must prepare themselves for arduous, lengthy and at the same time, influential and lasting work and efforts.”

He pointed to the establishment of an Islamic order in Iran and the advantages of this era for the fulfillment of the clergy’s responsibilities and added, “‘An Islamic milieu prevailing in the society is one of these features; furthermore, there is an ideological vacuum at the global level resulting from frustration at the futility of Marxis and Liberalist ideologies, which has paved the ground for the offering of new propositions by Islamic ideology.”

The Leader of the Islamic Revolution reiterated, “If we could bring Islam’s new and appealing propositions regarding humanity, society and politics to the attention of the people across the world, particularly the younger generation, they will certainly be welcome.”

Ayatollah Khamenei said the presence of widespread media and communication devices and tools due to the emergence of cyberspace as another feature of the present era for delivering the invigorating message of Islam and said, “One of the other advantages of this era is the plenitude of queries and ambiguities in minds and this abundance of questions activates the minds to find answers and paves the way for pushing back the frontiers of science.”

He reiterated, “Just as we should not stop on questions and doubts, we should also seek logical and correct solutions in the quest for answers.”

In another part of his speech, Ayatollah Khamenei discussed some of the issues raised by the seminarians in the meeting and mentioned some points about them.

The Leader of the Islamic Revolution urged the seminarians to “take the lessons and academic debates seriously” and said, “To be influential in the society, we should boost erudition and promote academic standards, just as the great [late] Imam [Khomeini], who was at the highest academic level, succeeded in bringing to fruition the huge campaign and movement of the Revolution.”

He said the prerequisite for reformative proposals for seminaries is their “practicality” and added, “The plan is in fact building a road and path toward the destination; therefore, it should be compiled based on realities, and potential obstacles and solutions should be included and foreseen in it.”

Ayatollah Khamenei said the path to removing weak points and achieving a favorable state hinges on a resolute will, motivated movement and campaigning and reiterated, “Campaigning means efforts and struggle, sharing ideas and organization.”

He described as incorrect and “betrayal of the Revolution” the assumption by some individuals and writers that campaigning and Islamic Revolution are over, reiterating, “A revolution disrupts previous norms and creates new norms and the longevity of the revolution means the safeguarding of new norms.

Pointing to the various stages of formation of civilizations, the Leader of the Islamic Revolution added, “The Islamic establishment emerged from the revolutionary movement and these great many achievements were gained, but there is still a long way to go to reaching the favorable point and the establishment of an Islamic government and Islamic society and we are undoubtedly moving along this path and advancing.”

The Leader of the Islamic Revolution strongly urged all young seminarians to observe piety, practice self-restraint,  worship and establish affinity with the Holy Quran and prayers and said, “Know that this path needs practical promotion more than verbal promotion and we have to begin with ourselves.”

At the end, Ayatollah Khamenei reiterated, “If lessons, academic debates and active minds are accompanied by piety, our academic and religious society, which is called the clergy, will certainly have a much better future than today.”

At the beginning of this meeting, a number of students of the Tehran Province seminary raised their concerns and expressed their views.