The Leader in a meeting with Judiciary chief and staff:

Stand firm against ill-wishers, but show compassion toward people 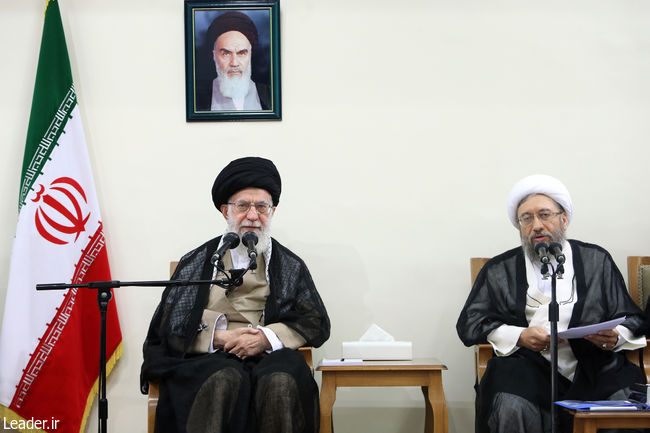 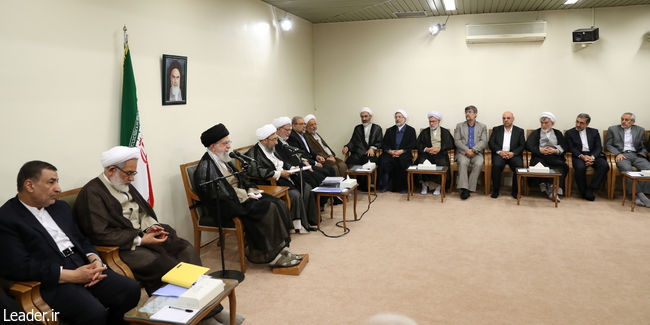 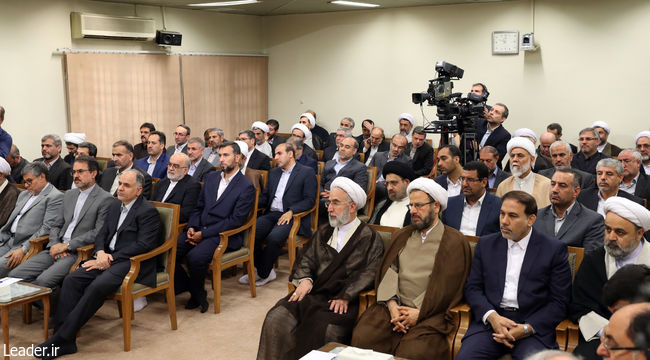 In a meeting with the Judiciary head and officials, Leader of the Islamic Revolution Ayatollah Seyyed Ali Khamenei pointed to the heavy and governmental responsibilities of the  judicial body, stressing, “The Judiciary should be the ‘manifestation of justice’ and the ‘people’s reliable sanctuary and comforting refuge’ for the restoration of individual and public rights, and the confidence of public opinion must be won with correct advertisement, namely the artistic and effective reflection of realities and the performance of the judiciary apparatus, and continuous internal progress and transformation.”
At the beginning of his remarks, the Leader of the Islamic Revolution offered his congratulations on the occasion of the Judiciary Day and Week and thanked Judiciary Chief Ayatollah Sadeq Amoli Larijani for his thorough and comprehensive report on the performance of this branch of the government. He said naming a week after the Judiciary on the anniversary of the martyrdom of Ayatollah Beheshti is, like many calendar occasions of the Islamic Establishment, based on martyrdom and sacrifice in the path of God. Ayatollah Khamenei added, “This fact takes the responsibilities and expectations of the Judiciary beyond [those of] a mere administrative body and set all-out struggle, sacrifice and selflessness to achieve lofty goals as the example for this apparatus.”
Ayatollah Khamenei expressed his appreciation to the chief, officials and the core of the Judiciary and described the responsibility of this body as governmental and very crucial. He added, “If the judicial apparatus performs well in its fulfilment of responsibilities, namely, ‘judgement, settlement of divisions, and disputes and the punishment of law offenders, the people will be satisfied and happy with the government and if the responsibilities are discharged poorly and inadequately, the people will be displeased with the government.”
He said the proper and resolute fulfilment of the responsibilities of the Judiciary has many effects in the lives of the people, reiterating, “As repeatedly stressed, the Judiciary must be the manifestation of justice and the refuge of the nation and the people must be confident that wherever they faced aggression or a violation of the law, they can claim their right with peace of mind by referring to the Judiciary.”

The Leader of the Islamic Revolution said the intervention of the judicial apparatus in matters pertaining to public rights and issues concerning the everyday lives of the people is one of the most important responsibilities of this apparatus. He said, “Confidence must be instilled in the people that in cases related to public rights, if they go to judicial authorities, their rights would be restored.”

Ayatollah Khamenei also said that the requisite for an overhaul in the judiciary apparatus is the determination of precise indices and a timeframe, stressing, “Overhaul cannot happen gradually and must take place swiftly and at a good pace to be noticeable.”

He pointed to the important issue of public opinion and the need to gain the confidence of the people and the weakness of the Judiciary in this sector, adding, “We must act resolutely against enemies, ill-wishers, conspirators and slanderer; however, in dealing with the people, we should engage with modesty, compassion and kindness and be considerate toward them to be able to win the trust of the public opinion.”

The Leader of the Islamic Revolution said winning public trust and confidence-building is one of the fundamental measures of all institutions, particularly the judicial body and its executives, adding, “Trust-building requires two main pillars, one is practical measures and the other is advertising.”

On the need for correct advertisement, Ayatollah Khamenei added, “Today, the Judiciary is targeted with the most intense propaganda and media pressure by the enemies abroad and the ignorant inside the country such that as part of this propaganda, a ruthless murderer, who had killed a number of young security forces and was convicted after his crime was investigated in legal and fair proceedings over several months, is portrayed as innocent and the compassionate Judiciary, which pursues the rights of the oppressed, in depicted as oppressive and aggressive.”

He stressed, “Effective promotional measures in the judicial apparatus and countering such a huge media campaign require a skilful and strong media team.”

The Leader of the Islamic Revolution stressed that promotional and media campaigns must be such that they would strike a chord with the audience and not just reported to them, adding, “Various plans must be continuously devised with professional and artistic approaches and the believable and palpable truths and realities must be delivered to the public opinion.”

Ayatollah Khamenei reiterated, “Today, through propaganda and complex propagandistic means, black is portrayed as white and absolute wrong is depicted as right; however, most of our apparatuses have regrettably underestimated artistic and precise media activities and the issue of gaining public confidence.”

Continuing, he highlighted the need to utilize various and appropriate methods to address the people’s lawsuits in public prosecutor’s offices and judicial bodies, saying, “Diligent, sincere and content judges in the Judiciary must be introduced to the people so that this work ethic is promoted and on the other hand, offenders and traitors, whether judges or others, must also be presented to the people.”

The Leader of the Islamic Revolution stressed the need for the continuity of the internal reformation of the judicial apparatus, adding, “Every important case in the Judiciary which leads to a fair sentence is in fact a continuous charity and a virtuous deed and must be correctly brought to the attention of the people.”

In another part of his speech, the Leader of the Islamic Revolution described as important the role of the judicial body in fighting economic corruption, reiterating, “In the management of the fundamental issue of the country, namely economy, the Executive branch plays the leading role; however, the Legislative and Judicial branches are also effective and influential.”

He described the creation of cyberspace security as among the duties of the Judiciary, adding, “The business, life and livelihood environment of the people must be secure and the judicial branch must confront economic security disruptors.”

Ayatollah Khamenei said another responsibility of the Judiciary is to firmly and openly fight the economically corrupt, adding, “You must engage and be active in this issue very overtly and effectively.”

He criticized remarks which directly or indirectly inculcate the assumption of widespread corruption in all of the apparatuses in public opinion, adding, “There is corruption in some ‘governmental and public apparatuses and business environments,’ but ‘systemic corruption’ is not true and this false assumption must not be created in public minds.”

The Leader of the Islamic Revolution described as imperative the satisfaction of public opinion with the performance of the Judiciary in countering the cases of economic corruption, stressing, “When you tried and punished a corrupt person, clearly, reasonably and artfully explain this to the people so that the people would feel the veracity of your performance and the threats would turn to opportunities.”

Cooperation with the administration in solving economic woes constituted another of his recommendations to the officials of the Judiciary.

Ayatollah Khamenei also expressed satisfaction with the Judiciary’s measures to restore the rights of the Iranian nation in the face of bullying by the enemies and in countering the so-called advocates of human rights, “On the issue of human rights against the criminal Western pretenders, the Islamic Republic is the plaintiff and demander.”

He pointed to the US human rights atrocities in various regions of the world and crimes of the French and Brits in the African Continent and Indian Subcontinent over the past decades, reiterating, “Also in recent years, the actions of the Westerners in support of Daesh in Syria, Myanmar and other regions shows the endless lies of the brazen advocates of human rights.”

Prior to the remarks of the Leader of the Islamic Revolution, Ayatollah Amoli Larijani presented a report on the activities and performance of the Judiciary concerning judicial proceedings, public services, human resources, intensification of monitoring, public rights, crime prevention, public education and ethics promotion on prison premises, reformation and refinement of laws, international judicial issues, the expansion of research and information technology projects, briefings and transformation in the Judiciary.

Ayatollah Amoli Larijani stated that in the previous Iranian calendar year (March 21, 2017 - March 20, 2018) more than 16 million cases were addressed in judicial bodies, adding, “The Judiciary has launched a new movement for the restoration of public rights and has defended people’s rights by engaging in some important matters such as the dispossession of the appropriators of natural resources, roads issues and flight delays.”

The head of the Judiciary pointed to the intensification of monitoring on the judges and personnel of this body, adding, “As part of the process to counter corruption inside the Judiciary, 167 judges were suspended or disqualified and 465 cases were dealt with.”

Ayatollah Amoli Larijani reiterated, “Both at the level of the heads of the government branches and judicial officials, there was more interaction with outside the Judiciary in the previous year to resolve the problems of the people.”

The head of the Judiciary pointed to the attacks against the Judiciary, stressing, “Despite the undermining, slanders and libels, the honourable judges, diligent staff and committed managers of the judicial apparatus are fulfilling their duties with all their might to serve the people.”