The Leader in a meeting with the president and his Cabinet: 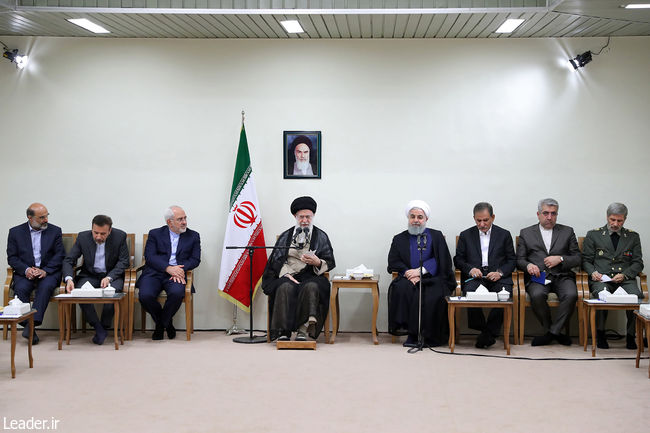 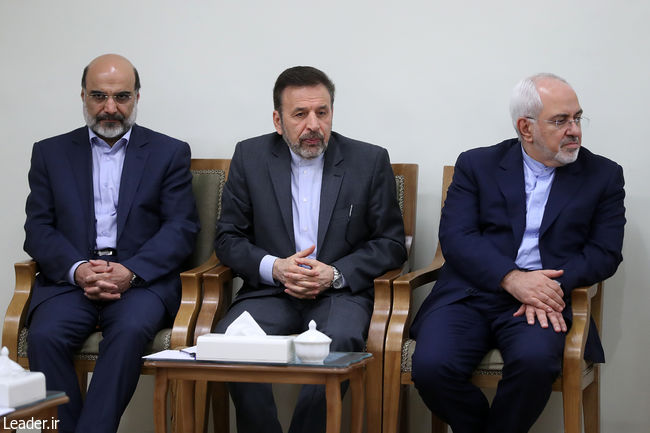 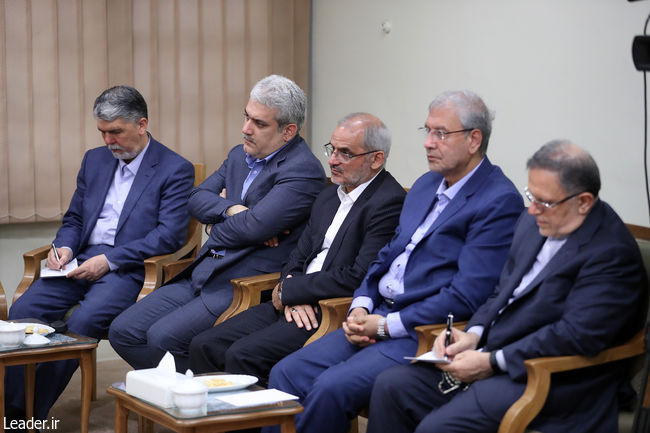 In a meeting called by Leader of the Islamic Revolution Ayatollah Seyyed Ali Khamenei with Iranian President Hassan Rouhani and the Cabinet members, Ayatollah Khamenei highlighted the domestic potential to weather the economic problems of the country by tapping into officials’ revolutionary spirit and diligence and round-the-clock efforts and endeavors as well as the cooperation and contribution of the people. He also outlined the conditions and necessities for the continuation of the fast-paced progress and advance toward the goals.

In the session, Ayatollah Khamenei said the main condition for success in all areas is the possession of “a strong spirit, motivation, courage and resolute determination,” adding, “All government executives must act with a sense of responsibility and greater efforts in the face of problems.”

The Leader of the Islamic Revolution also urged the Islamic Republic of Iran Broadcasting (IRIB) to convey a correct image of the measures of the administration, adding, “Of course, there is nothing wrong with expressing reasonable criticisms; furthermore, a huge portion of the correct portrayal of the administration depends upon the performance of the officials, namely, the authorities must appear among the people, laborers and industry [workers] and establish ties with them first hand.”

Ayatollah Khamenei described as powerful the stances of the country’s president during his tour of Europe, adding, “The display of might against foreigners, particularly the Americans, is a necessary measure and this should be done in a timely, resolute and explicit manner.”

“Following projects through the use of the country’s facilities and capabilities” was another recommendation of the Leader of the Islamic Revolution to officials.
He added, “Indeed, the European sides are obligated to provide the necessary guarantees regarding the JCPOA (the 2015 nuclear deal called the Joint Comprehensive Plan of Action); however, the economy of the country must not be tied to this issue and be held up by it.”

Ayatollah Khamenei highlighted the “need for the daily expansion of foreign relations and diplomacy,” adding, “Except for a few cases such as the US, the country’s ties with the East and West must be enhanced ever more and operational and purposeful mobility of diplomacy must increase.”
Continuing, the Leader of the Islamic Revolution outlined some recommendations and solutions to resolve the economic woes.

He described as necessary the drawing up of a “roadmap for a stable economy,” adding, “If a roadmap for economy is devised, the people and economic agents will be aware of their conditions and will rush to the aid of the administration with a sense of stability and calm.”
“The enhancement of the private sector” and “the need to resolutely confront law-breakers” were two other recommendations made by Ayatollah Khamenei.

In this regard, he pointed to transgressions by some government institutions and individuals regarding the recent issues of gold coins and foreign currency market, stressing, “Offenders must be dealt with, whatever their status.”

The Leader of the Islamic Revolution described as positive the order issued the previous day by the president to address the violation in the imports of vehicles, adding, “These directives must be followed through, so that they would lead to a satisfactory outcome.”

He described as imperative “the administration’s command and exercise of power over financial transactions to prevent destructive operations such as smuggling and money-laundering” and pointed to some offences committed in using foreign currency provided at the official rate. He said, “Such blatant violations must be stopped via relevant systems or constitutional regulations.”

“Taking Resistance Economy policies seriously,” “Timely action and prevention of incidents before their occurrence” and “genuinely combating corruption” were other issues highlighted by the Leader of the Islamic Revolution in the meeting.

He stressed that in the campaign against offences, first corruption and lawbreakers must be dealt with and then this should be transparently publicized, saying, “Of course, the issue of countering the corrupt is in the first place a responsibility of the authorities of government institutions and the issue should then be delegated to the Judiciary.”

In conclusion, he said, “I earnestly believe that the administration, provided that it takes the necessary measures, will succeed to overcome the problems and foil US plots.”

In the meeting, Rouhani addressed the Leader of the Islamic Revolution, saying, “We will summon all our efforts to execute and put into practice the points that you mentioned.”

The president pointed to the effort by the enemy to arouse concern among the people about the future and create inflation expectations, adding, “Despite all the psychological and economic bids of Iran’s enemies, the country’s foreign and domestic currency revenues in the first three months of the current [Persian calendar] year (March 21 – June 21) has been greater than those of the corresponding period last year and in the development sector the credit allocated and provided has been 22 times more than the previous year.”

Rouhani stressed that some issues such as the problems of the banking and liquidity systems is not related to sanctions and foreign pressure and have existed from before and pointed to the administration plans to resolve these issues. He said, “The settlement of these issues is on the main agenda of the Supreme Economic Cooperation Council and the administration’s Economic Committee.”

The president also described as crucial complete coordination among the three branches of the government and government institutions to thwart the US plots.