The Leader in a meeting with ambassadors, Foreign Ministry officials:

Obviously wrong to think ties, talks with US will solve problems 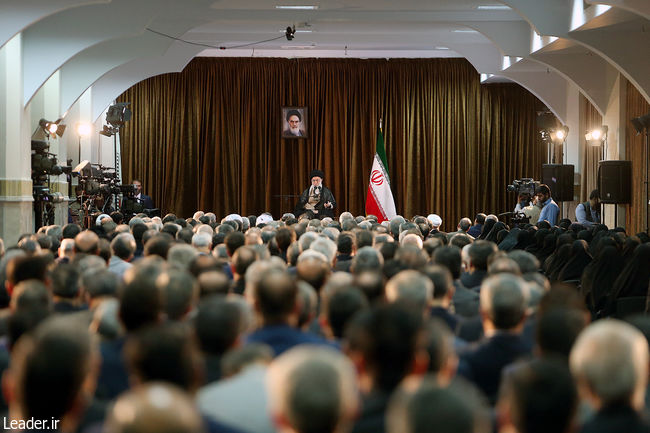 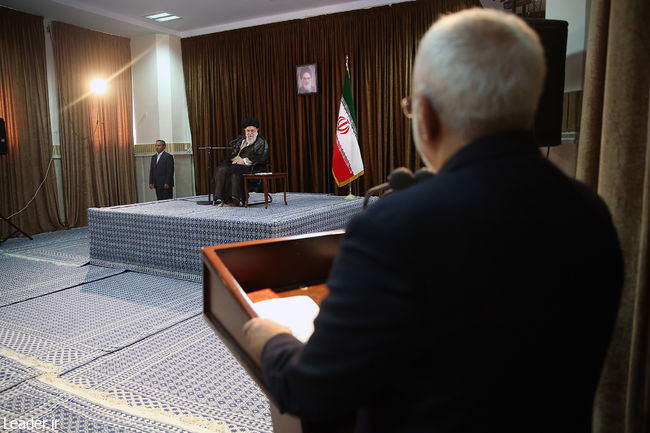 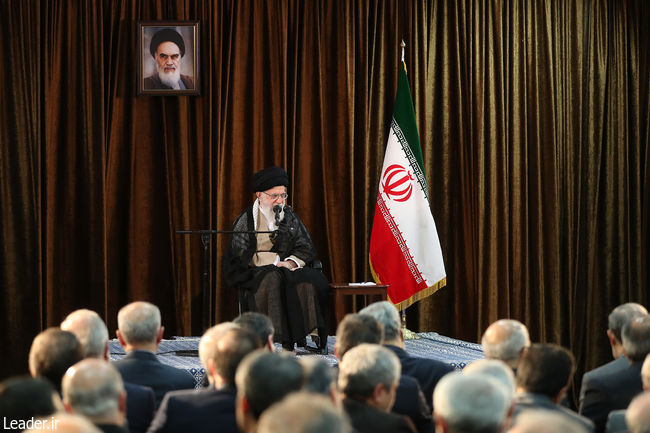 In a meeting with ambassadors, chargés d'affaires, and Foreign Ministry officials, Leader of the Islamic Revolution Ayatollah Seyyed Ali Khamenei said the main objective of foreign policy is the fulfillment and protection of national interests in the real sense of the word and outlined the dos and don’ts of diplomacy in the Islamic Establishment. He added, “It is possible to expand foreign relations with proper revolutionary spirit and purposeful and smart diplomacy and turn the Establishment’s elements of might into support for political and diplomatic achievements.”

At the beginning of his remarks, the Leader of the Islamic Revolution pointed to the current circumstances and the expansive front that has been formed against Islam and the Islamic Republic of Iran, saying that diplomatic efforts toward defending the rightfulness of the Iranian nation will carry a divine reward and constitute a historic and national honor.  He said, “In the face of challenges, zealous, patient and wise human beings step up their efforts and the volume and quality of their work; therefore, the spirit of the renewal of activities in the diplomatic apparatus must grow.”

Ayatollah Khamenei added, “The maintenance of the religious health and spiritual and psychological cleanliness of oneself and one’s family and behavioral and verbal commitment to religious issues are among the most important responsibilities of Foreign Ministry officials and staff, particularly, ambassadors and members of Iran’s missions abroad.”

He stressed that the diplomatic apparatus is the main component of the country’s foreign policy and the exterior façade of the Islamic Republic, reiterating, “The Foreign Ministry, particularly ambassadors, must be deeply committed to the values of Islam and the Revolution and their speech and conduct must reflect these values.”

Ayatollah Khamenei described as important the statement of President Hassan Rouhani during his recent visit to Europe that “If there is no Iran oil exports, no country in the region will export oil” and said that it is indicative of the Establishment’s policy and approach. He added, “It is the duty of the Foreign Ministry to seriously follow up on such stances of the President.”

Continuing, the Leader of the Islamic Revolution pointed to the issue of “ideological diplomacy,” reiterating, “Some people erroneously speak of the separation of diplomacy from ideology, whereas there is nothing wrong with ideological diplomacy and the implication of disagreement between ideology and national interests is not correct and reasonable.”

Khamenei stressed that the purpose of the establishment of the Islamic Republic is the safeguarding of national interests, independence, freedom, social justice as well as national might and security, adding, “Ideology seeks to fulfill and maintain national interests and constitutes the identity of a nation.”

The Leader of the Islamic Revolution pointed to the existence of ideology in the conduct and policies of Western governments, saying, “The Americans repeatedly use the expression ‘American values’ in their remarks which is their very same ideology and stems from the US Declaration of Independence and ideological beliefs also govern political conduct and bids in European countries.”

He said wise, smart, purposeful and reasonable ties with the world emanate from the Establishment’s Islamic outlook and fully complies with ideological diplomacy.

The Leader of the Islamic Revolution said the realization and display of revolutionary spirit in diplomatic interactions and approaches is imperative, adding, “An Iranian diplomat must take pride in the Revolution and ‘dignity, sense of power and self-confidence’ must be clearly observable in his engagements and, indeed, this revolutionary conduct and disposition is totally different from making unreasonable remarks and raising ballyhoo.”

Ayatollah Khamenei elaborated on the need for the Iranian ambassadors and diplomats to have a sense of rightfulness and pointed to the issue of the relentless war of nerves launched by the enemies, adding, “Firm and reasonable responses must be provided to the accusations of foreigners through a sense of rightfulness and awareness of and mastery in challenging subjects.”

He said the constant leveling of accusations against Iran over an adverse issue is on the main agenda of the unceasing the enemy’s psychological war, adding, “To achieve this end, ‘Fear of Iran, hostility against Iran, repulsion toward Iran, allegations of violation of democracy, lack of freedom and breach of human rights’ are constantly repeated in the propaganda of foreigners.”

Ayatollah Khamenei pointed to the crimes of the Europeans and Westerners in their previous colonies, the limitation of democracy in the West to the regulations or views of certain centers, the existence of partisan dictatorship in the US and some European countries and the current Western crimes such as collusion with the Saudis in the massacre of Yemeni people. He added, “Westerners are the manifestation of the violation of human rights; however, they make accusations against Iran with utter brazenness such that one feels astounded at the extent of their insolence.”

The Leader of the Islamic Revolution said the assumption of the resolution of the country’s problems through negotiations or ties with the US is a clear mistake, adding, “The US has a basic and fundamental problem with the very principle of the Islamic Establishment; furthermore, there are many countries in Africa, Asia and Latin American who have ties with the US but are still grappling with many problems.”

Explicating the deep US hostility against the Islamic Republic, Ayatollah Khamenei reiterated, “The Americans seek a restoration of their status and condition in Iran prior to the [1979] Revolution and will not settle for anything less.”

He said the US opposition against “Iran’s nuclear capability and high enrichment capacity and its presence in the region” stems from their deep antagonism toward the elements of the Islamic Establishment’s might, adding, “Regional presence is part of Iran’s elements of might and security and is regarded as the country’s strategic backbone and that is why enemies are opposed to it.”

The Leader of the Revolution pointed to the repeated declaration of US untrustworthiness by Iranian officials, adding, “I have been reiterating this point for a long time that you cannot count on the words or even signatures of the Americans; therefore, negotiations with the US is useless.”

He said it is important to develope untapped or scarcely-tapped capacities in the country, adding, “Negotiations with the Europeans should not be ceased; however, do not stay waiting for the European package but pursue the many necessary projects inside the country.”

The Leader of the Islamic Revolution described as important the expansion of multilateral and particularly bilateral links and special attention to regional organizations, adding, “Iran’s ambassadors and representatives abroad must be fully aware of the capacities and capabilities of the nation and country.”

Ayatollah Khamenei pointed to the recent acknowledgment by US officials about the talents of the Iranian nation, adding, “I have been emphasizing since many years ago that Iranian talent is greater than the world average; this reality is an important domestic capacity, just as the nation’s faith, courage, sacrifice and pride in values are among the other elements of Iran’s capabilities.”

He said the establishment of links with scientists, non-government politicians and economic agents of other countries is among the common diplomatic approaches in the world, adding, “Through these approaches, the expanse of the operations of the foreign policy apparatus can be increased.”

The Leader of the Islamic Revolution also said that battleground might is support for diplomacy, adding, “It is important that any element of power is converted into a kind of political and economic achievement.”

Prior to the remarks of the Leader of the Islamic Revolution, Foreign Minister Mohammad Javad Zarif pointed to the approach of the diplomatic apparatus, particularly with regard to the country’s neighbors and concentration on economic diplomacy, saying, “We have sought to rise to challenges with self-belief and rigorously defend national interests.”

Zarif said that we succeeded to thwart the Zionist Iranophobia campaign with the same approach and with the support of the Leader of the Islamic Revolution and his guidelines. He reiterated, “[US President Donald] Trump and [Israeli Prime Minister Benjamin] Netanyahu seek to revive the Iranophobia project through cheap spectacles; however, today, they are isolated and alone even among their allies.”

The Iranian foreign minister pointed to the establishment of a war room and extensive US effort to bully and pressure the Iranian nation, saying, “We have always declared to other countries, including US allies, that countering US bullying must transcend political commitments and culminate in practical measures with a time frame.”

Zarif added, “We have gone through harder times and I am confident that under the auspices of unanimity and consensus, we can prevail over the problems and manage the conditions ahead with divine favor and the guidance of the Leader and people’s support positively, proudly and honorably and emerge as unscathed as possible.”