The Leader at cadets’ graduation ceremony:

Iran did not fear US scowl and forced it into retreat 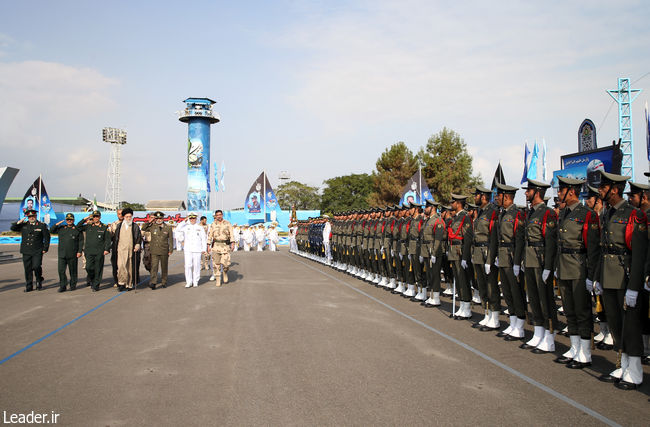 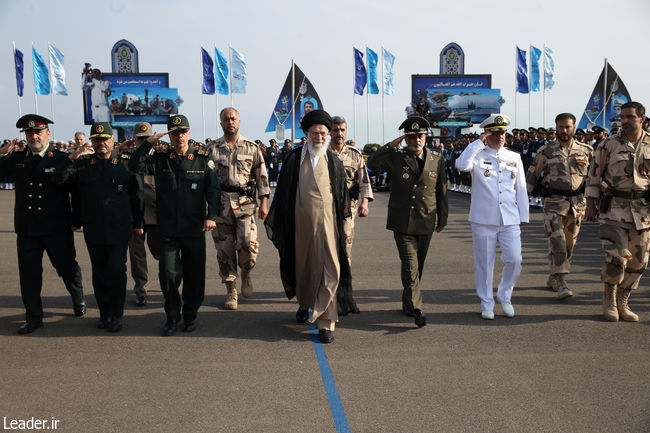 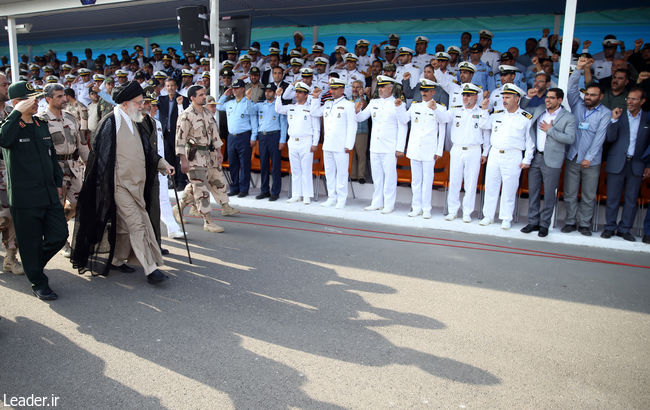 In the 16th joint graduation and oath-taking ceremony for cadets at Islamic Republic of Iran’s Army academies, Ayatollah Seyyed Ali Khamenei, the commander-in-chief of Iranian Armed Forces, described the Army uniform as a proud and auspicious outfit and pointed to the Hegemony’s malevolent policies to create insecurity and instability in the region. He stressed, “The Islamic Republic and the Iranian nation have proven through standing up to the US that if a nation is not scared of scowling and admonition by bullies and relies and depends on its own capabilities, it will defeat the superpowers and force them into retreat.”

At the beginning of this ceremony, which was held at Imam Khomeini Naval University of Noshahr, Ayatollah Khamenei paid tribute to the honorable martyrs of the Revolution and Sacred Defense by visiting the tombs of unknown martyrs and praying for their souls.

The Leader of the Revolution then inspected the troops on the ground in the campus.

In the ceremony, the commander-in-chief of the Armed Forces said the faithful and brave youths in Army universities are a cause for the greater optimism of every wise person in the future of Iran, adding, “The heavy burden of the bright future of our country is shouldered by the youths and the zealous army youths bear one of the important and sensitive parts of this responsibility.”

He said the Iranian nation is the flag-bearer of sovereignty and justice in the world, adding, “The Armed Forces are defending such a country and nation and must uphold this great honor with all they have and with deep religious and national motives.”

The Leader of the Islamic Revolution pointed to the many people in various countries who want justice but have no way to express their yearning for justice and no way for liberation from the clutches of Hegemony, adding, “In such a world, the Islamic Republic and the Iranian nation express their resistance against tyranny and hegemony with a clear voice and with no secrecy and this issue is the main reason for the hostility of global tyrants toward the great Iranian nation.”

Ayatollah Khamenei pointed to the instability and insecurity in various regions of the world, particularly the West Asia region, adding, “The Hegemony, led by the cruel and tyrannical US, see their interests in creating internal wars, heinously increasing and expanding terrorist operations and regional conflicts, and regrettably some regional states are helping them.”

The Leader of the Islamic Revolution said preventing a Muslim power from rising in the region is an objective of the US and the Zionist regime, adding, “They know that the appealing message of Islam is the protection of the oppressed and the underprovided; therefore, they are fearful of the formation of a power based on Islam.”

Ayatollah Khamenei said the strong resistance of the Islamic Republic against Hegemony is the reason for the global tyrants’ failure in most of their objectives in the region, reiterating, “Political analysts and the intelligent people of the world are astonished at how Iran has frustrated global powers in the region through reliance upon God and depending upon national might and acknowledge this fact.”

The Leader of the Islamic Revolution said threats, scowls, admonition and saber-rattling in words and speech is the main approach of tyrannical powers to frighten nations, stressing, “If a nation is not sacred of these approaches and moves on the path of justice and righteousness with courage, confidence and trust in its own abilities, it will force defeat upon the superpowers and compel them into retreat.”

He cited the Islamic Republic of Iran as a clear example of this reality and reiterated, “Iran has been the target of acts of sabotage by the US and its accomplices for over 40 years; however, a small sapling has turned into a strong and fertile tree and despite the intense grudge and plentiful measures of tyrants, it has drawn and attracted the hearts of nations to the message of the Revolution and bright about the failure of US plots in the region.”

The Leader of the Islamic Revolution cited Syria, Iraq and Lebanon as examples of the failure of US plots in the region, adding, “These are signs of Almighty God’s power and the veracity of the divine pledges that if you help God, God will help you and make you steadfast.”

In another part of his speech, the commander-in-chief of the Armed Forces urged the Armed Forces to daily increase their innovations, readiness and capabilities in scientific, organizational and battle fields and various advances, adding, “According to the noble Quran verse, increase your might as much as you can, because your might will frighten the enemy and force them into retreat.”

In another part of his speech, he urged all of the people, particularly youths to be careful about and prevent the influence of enemy allurements in the general environment of their lives, adding, “Do not allow the infiltration of the enemy to create a disruption in the coherent ranks of faithful youths.”

The Leader of the Revolution said the struggles of the enemies in cyberspace and other areas are desperate, adding, “In spite of this, the enemy is extremely active in other fields and we must stand against them with vigilance, unity and reliance upon God.”

In the ceremony, Flotilla Admiral Habibollah Sayayri, Army deputy chief for coordination, had the honor of receiving the first-class Fat’h Order by the commander-in-chief of the Armed Forces, in recognition of his invaluable services and protection of the country’s maritime borders during his tenure as the commander of the Iranian Army’s Navy.

Then, parts of the operational readiness of the Army cadets were displayed and the units present on the campus paraded before the commander-in-chief of the Armed Forces.

Also in the ceremony, Army Commander Major General Abdolrahim Mousavi welcomed the Leader to the academy, stressing, “The Army of the Islamic Republic of Iran, alongside and in synergy with other Armed Forces, is on the frontline of defending the honor and dignity of the Iranian nation.:

Captain Karim Masdari, the commander of Imam Khomeini Naval University, also presented a report on the activities of Army academies.

The last phase of the 16th joint graduation and oath-taking ceremony for cadets at Army academies was dedicated to the cadets’ naval exercises before the commander-in-chief of the Armed Forces. In the eight-stage maneuver sophomore, junior and senior students exhibited parts of their readiness.

Also in the ceremony, in a live video connection with fleet 56 deployed in the Gulf of Aden, Commander Moohsen Razzaghi, reported on the missions of this fleet, including creating a safe environment for the passage of ships in the high seas.

The commander-in-chief of the Armed Forces also expressed his gratitude and wished greater achievements for Iran’s Armed Forces, stressing, “You are capable of providing full security for the seas surrounding beloved Iran through prudence and bravery.”