In a meeting with a group of the Iranian researchers

The Leader: Momentum of Iran's advancement must not slow down 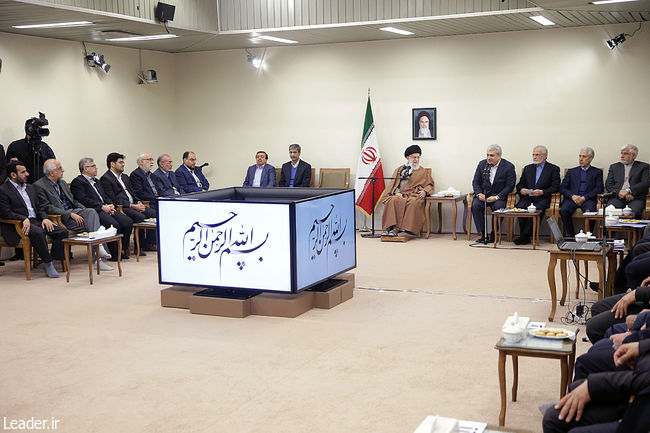 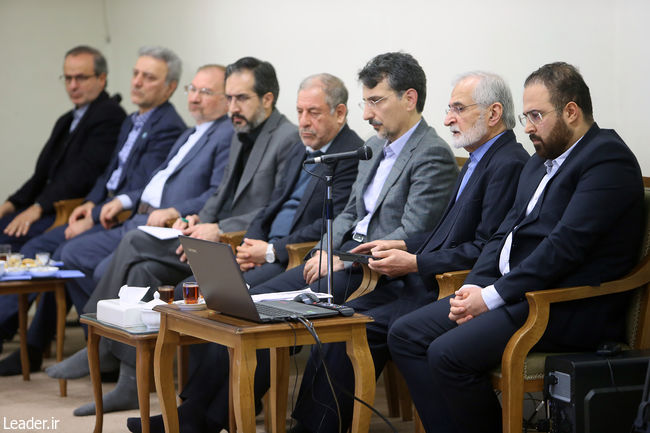 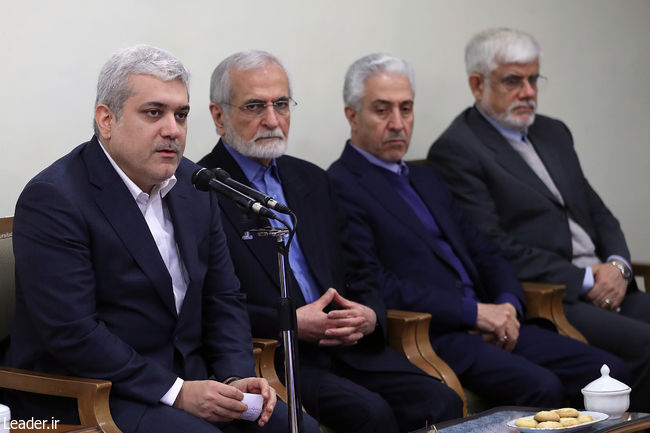 A group of officials and researchers of the Research Center for Cognitive Sciences met with the Leader of the Islamic Revolution— Ayatollah Khamenei—on January 23, 2019.
While meeting with the officials and scholars of the Cognitive Sciences and Technologies Development Organization, the Minister of Science, and related universities’ deans and faculties, Ayatollah Khamenei—the Leader of the Islamic Revolution—referred to the influential role of cognitive sciences in scientific, medical, social and economic fields and emphasized on the need for comprehensive and unceasing efforts for increased advances in these sciences. He asserted: The momentum that the scientific advancement of the country has enjoyed over the past 20 years should not decrease or cease; rather, the momentum should be maintained and strengthened for years to come until it reaches a climax in science and knowledge.
The Leader of the Revolution expressed gratitude for the efforts and scientific achievements of the officials as well as the scientists at the Cognitive Sciences Development Organization and added: One must thank God for humans’ scientific advancements and the opening of new doors to better understand the amazing and stunning order of the universe; for they move mankind closer to knowledge of the divine.
Ayatollah Khamenei reiterated: Every one of the doors that open to science and knowledge for humans, thanks to God, will prepare the grounds for deep and new changes in human life. Hence, any nation that stays behind new sciences and relevant technologies will be doomed to backwardness, humiliation, and colonialism by the domineering powers.
He went on to say: For the same reason, developments in the realms of knowledge and science are often stressed; thus, scientists and scholars, as well as research and academic centers, should do their best and work constantly in order to keep the momentum of the country’s scientific movement, in particular, in new sciences; while relying on God and seeking His satisfaction. The country’s officials and, especially the government should particularly heed this matter.
The leader of the Islamic Revolution expressed his satisfaction with country’s scientific movement in the past 20 years and held: The momentum of country’s scientific movement in the past 20 years should not slow down; rather it should be maintained for the next 20-30 years until we reach the climax. We should not be content with current scientific advancements.
Ayatollah Khamenei further added: If we lag behind the world’s scientific movement, even slightly, we can no longer catch up with the scientific movement and achieve scientific peaks; so no ceasing is appropriate in the scientific movement.
He mentioned the issues on the budgets of the country’s scientific and cultural centers and the economic problems the executive leaders are facing and maintained: I am aware of the problems, but I believe when a nation is determined, they can achieve great results, even during the harsh economic and political crisis.
The leader of the Revolution referred to some historical examples in a few countries where, in very difficult times, they launched great scientific work, adding: Our current situation is not as severe as those countries’ challenges, hence, we can establish strong scientific pillars.

The leader of the revolution advised the officials of the Cognitive Sciences Development Organization to set out priorities and necessary targets and said: in all fields related to cognitive sciences, targets must be made clear before writing down plans and projects, and assigning them to researchers.
Ayatollah Khamenei insisted on the importance of defining a native strategy to advance cognitive sciences and added at the end: on the way to explore these sciences which deal with reasoning and logic, move towards developing more knowledge of the divine.
Before the leader of the revolution's speech, Dr. Kamal Kharrazi presented a report about the projects of the Cognitive Sciences Development Organization and their goals, effects and functions in healthcare, economy, and different dimensions of the country's scientific progress, and said: a great deal has been done in Iran to create human and technological potentials in this branch of science, and Iran is among the best in the region and the advanced countries in the world.
Mr. Kharrazi mentioned the plans of the Cognitive Sciences Development Organization for introducing and promoting cognitive sciences, discovering great talents among students and encouraging them towards cognitive sciences, supporting books published in the field of cognitive sciences, and international scientific collaboration, and referred to the development of infrastructure for cognitive technologies and sciences all over the country, and the establishment of necessary laboratories, especially the National Laboratory for Brain Mapping, as a great achievement and provided explanations around several great national projects in the field of cognitive sciences.
Also, Dr. Sattari, Vice President for Science and Technology, reported on the growth of knowledge-based companies, advances in commercialization of science, increase in private investment in science and technology parks, and Iran's high rank in nanotechnology, biotechnology, and cognitive sciences.
Moreover, Dr. Nili, secretary of the Cognitive Sciences Development Organization, added comments about reforming the process of attracting great talents to this field of science, the need for new models in education and research with a multidisciplinary view, and investment and securing necessary funds in cognitive sciences.