The Leader in meeting with Air Force commanders and staff:

‘Down with USA’ means down with Trump, Bolton, and Pompeo 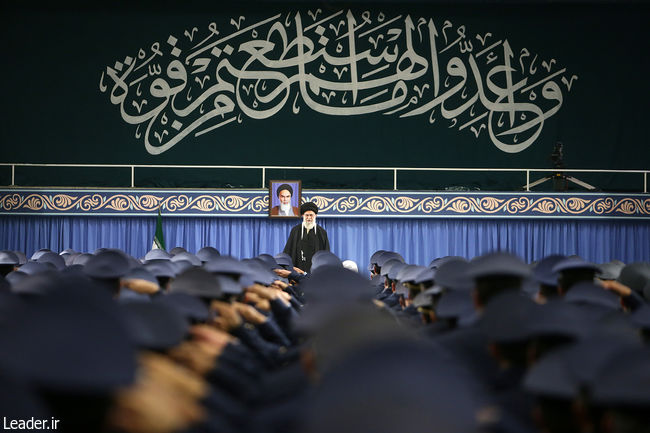 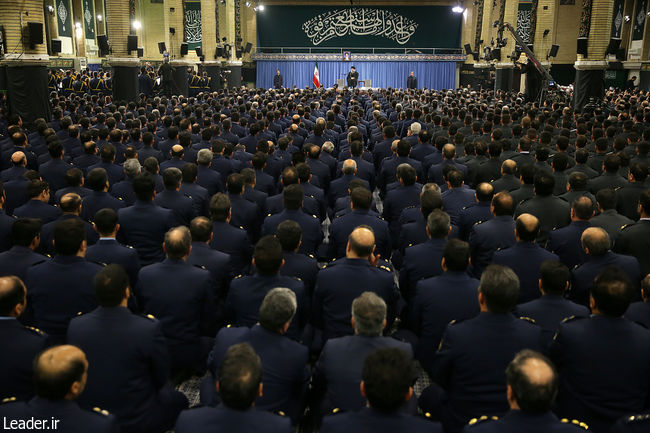 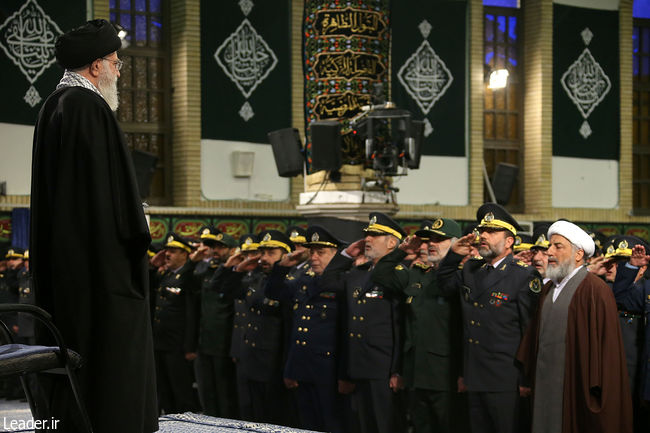 On the anniversary of the Army Air Force commanders’ historical allegiance with Imam Khomeini (aka Homafaran Allegiance), formed February 8, 1979, a group of commanders, pilots and staff of the Army Air Force met with Ayatollah Khamenei on February 8, 2019.
At this meeting, the Supreme Leader of the Islamic Revolution—Ayatollah Khamenei—pointed out to the years-long animosity the United States has practiced against Iran and other independent nations and asserted: The U.S. regime is the embodiment of evil, violence, creating chaos, and warmongering. The U.S. regime has always lived off trespassing for fulfilling its interests. The U.S.  is the embodiment of evil, then they complain why we chant "down with the USA".
Ayatollah Khamenei added, addressing the officials: Do not trust the Europeans. In the matter of nuclear negotiations, I had already mentioned that the U.S. officials are not reliable. Today, the officials, who accepted to negotiate, admit that the Americans are not reliable. These days, there is a discussion concerning the Europeans and their proposals. My advice would be that they should not be trusted, just like the U.S. cannot be trusted.
The Commander-in-Chief of armed forces, Ayatollah Khamenei, reiterated: About the U.S., at the time of the nuclear negotiations a few years ago, I frequently insisted— in private meetings with the officials and public gatherings—‘Do not trust the Americans, their promises, smiles and signatures; they are not trustworthy.’ Well, the result is that those officials who negotiated [with the U.S.] at that time are now saying that the U.S. is unreliable.
His Eminence addressed the American nation to elaborate on the popular revolutionary slogan by their Iranian counterparts and held: First of all, I am telling the Americans, ‘down with the USA’ means down with Trump, John Bolton, and Pompeo. It means down with the American politicians in charge, who are currently represented by the aforementioned persons. ‘Down with the USA’ means down with the few who are running that country. We have no fight to pick with the American people.
Ayatollah Khamenei further assured his audience at the meeting and across the world that, “As long as the United States shows viciousness and savagery, the Iranian nation will never cease shouting these words of ‘Down with the USA.’

The Leader of the Revolution stressed that taking cautionary steps when dealing with Europe does not imply cutting ties with those nations and stated: Even now, regarding Europe, I am not calling for cutting ties with them. However, the point I am trying to make here is about trust. Protesters on the streets of Paris are attacked, to the point that some have lost their eyes. Then they brazenly demand that we observe human rights. Do they even know what human rights are? Neither today, nor in the past, and never throughout their history, have they recognized what human rights are.
Imam Khamenei went on to say: They cannot be trusted or respected. We have experienced this time and again: France in a way, the UK in a way, and the rest in their own ways. Of course, we have relations with all the countries in the world with a few exceptions. But we should know who with and what about we are signing agreements.
Praising the massive crowd showing up each year at the anniversary of the Islamic Revolution, he said: The February 11 (Bahman 22) rallies represent a wonder; just like the revolution itself. We have seen the celebrations for the anniversaries of revolutions in other countries. It usually consists of an official ceremony with a military parade or similar events. However, the people taking to the streets, on cold winter days and turning out in massive crowds marching and demonstrating for hours, listening to speeches— repeatedly for 40 years—is a wonder. This embarrasses and defeats the enemy. It shows the willpower of the nation. This is the Iranian nation who is present on the forefront, and it showcases national unity.
Ayatollah Khamenei stressed that this year’s rally commemorating the victory of the Islamic Revolution will be greater than ever, stating: I believe that this year the Bahman 22nd rally is going to be more majestic than the previous years.

Commemorating the anniversary of the “Homafaran Allegiance” consolidated between the Air Force and Imam Khomeini, the Supreme Leader said: The historic event that happened on February 8, 1979, was, just like the revolution, wonderful.

He added: One of the blessings of the revolution was that the country’s Army joined the nation’s movement by heart and action. Every one of the Army Forces played a role in the revolution, and the role played by the Air Forces was prominent.

His Eminence added: The next stage was what happened on Bahman 21st. Another example was resisting the coup in the Shahid Nojeh military base. The self-sufficiency movement was also initiated by the Air Force itself. And then there was the tremendous war effort by the Army's Air Force, especially in the beginning of the war, and later during Operation Dawn 8. Finally, the conception of our first indigenous fighter jet, which continues to operate to this day.
The Leader of the Islamic Revolution praised the services by the Army Air Force in support of the military advisers operating in Syria to liberate the Holy Shrines and the people from the filth of the terrorists and asserted: One of the most recent services of the Army Air Forces includes supporting the Holy Shrines’ defenders.
Finally, his Eminence ensured the nation of a brighter future ahead thanks to the heroic resistance of the Iranian people in the face of brutal enemies, further stating that: I assume a bright future awaits us. I am aware of the problems like inflation; the news gets to me; even more than to others. Yet, today the Iranian nation is standing up to a vicious and cunning enemy like a hero, like a prominent figure, and knows what it looks forward to. The ideals and goals are clear. The Iranian nation is backing the revolution with extreme power. There are also complaints, but this has not led the Iranian nation to let go of their dignity and pride. This is my view of the nation.