The Leader in a meeting with participants in Intl. Quran competitions:

Normalizing ties with the Zionists violation of Quran word 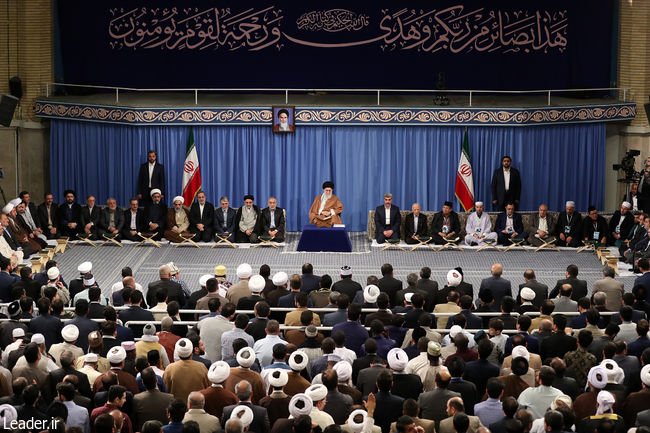 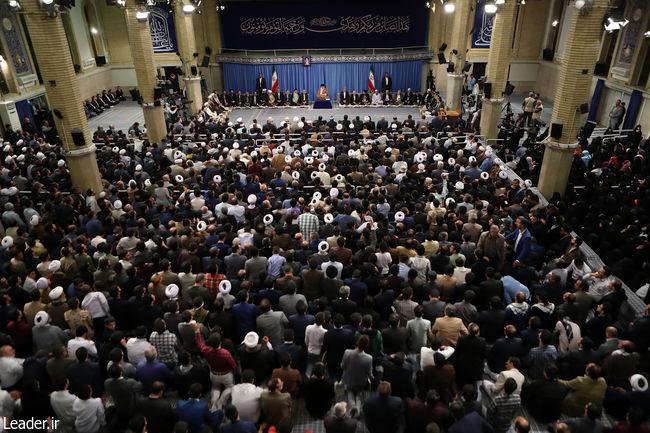 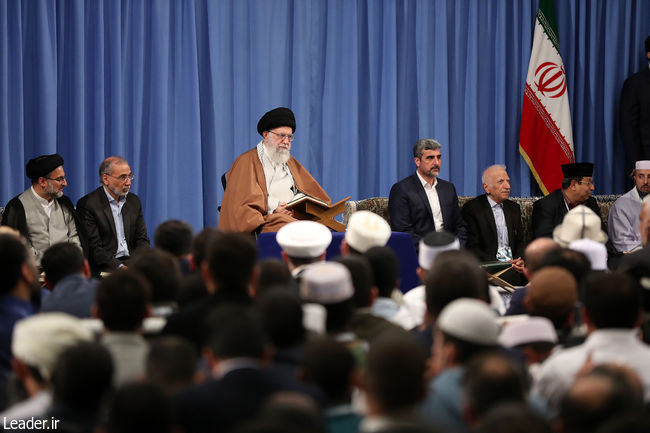 Distinguished masters, reciters and memorizers [huffaz] participating in the 36th International Quran Competitions met with the Leader of the Islamic Revolution—Ayatollah Khamenei—this morning April 15, 2019, in a gathering of bonding with the Holy Quran held at the Hussayniyah of Imam Khomeini (r.a.).

In this meeting, the Supreme Leader of the Revolution stressed that the Holy Book of Islam, the Quran, is the book that leads mankind to worldly and heavenly bliss and held: The Quran is the book of prosperity and bliss in this world and the hereafter, provided that we act based on its principles. The Quran says, “stern to the disbelievers;” [Quran; 48:29]. Some Muslims forget that, like those Muslim countries who compromise with the U.S. and the Zionists, to shed the blood of Palestinians and violate their rights. They abandoned being “stern to the disbelievers” [Quran; 48:29] and they became servants of the disbelievers. Today, the officials of many Muslim states represent examples of that.
Ayatollah Khamenei criticized Muslim states that engage in wars against their Muslim brethren and asserted: Another group has forgotten the principle of “compassionate among themselves” [Quran; 48:29]. They reject and excommunicate [takfir] the believers in Allah, the Quran, and the Ka’ba. When “compassionate among themselves” is abandoned, internal wars may arise. You see the current situation in Yemen and Syria; Yemen has been bombarded for 4 years now. Those who bombard Yemen are Muslims in appearance, but they do not show mercy to Muslims.
The Supreme Leader of the Islamic Revolution praised those who gave their lives for the sake of Allah as role models for selfless volunteering and maintained: The Martyrs have taught us many lessons. The initiative taken for providing relief for the victims of the recent floods in Iran is what the martyrs have taught us. The great movement of the people from different regions towards the flooded areas is an extraordinary phenomenon. The people and youth go there and along with the young local people contribute to the relief operation using their physical strength, facilities, and money.
Ayatollah Khamenei described Iranian nation’s devotion to volunteer in helping the flood victims as a lesson learned by the martyrs of the 8-year Sacred Defense and added: The great movement which is taking place is rare in the world: that the people take the initiative to assist those in need is a lesson from our martyrs. During the 1980s and the Sacred Defense also the young individuals took to the fields with the same enthusiasm and sense of self-sacrifice.
His Eminence called enemies’ hostile measures against the Islamic Republic as futile and counterproductive by saying that: What the enemies do against Iran today are their last resorts of enmity. The sterner they become against us, the stronger our willpower will become; the more they intensify their measures against us, the more powerful we will become; the more furious they become at our commitment to Quranic teachings, the more our reliance and commitment to the Quran will become. Reliance on and sticking to the Quran will bring us bliss, strength, and dignity.