Ayatollah Khamenei in a meeting with Quran reciters:

World's plight is due to ignoring Quran advice against oppressors 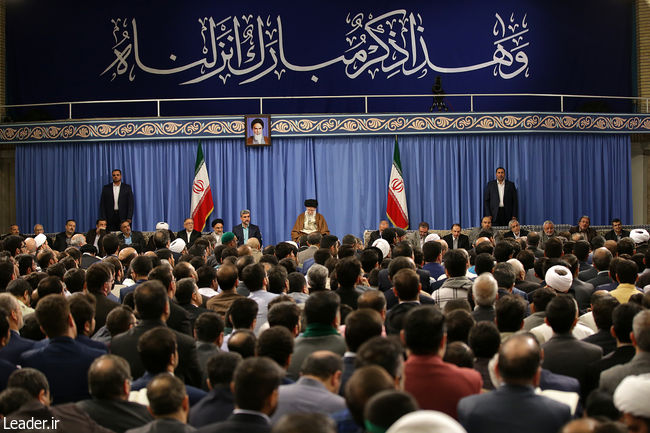 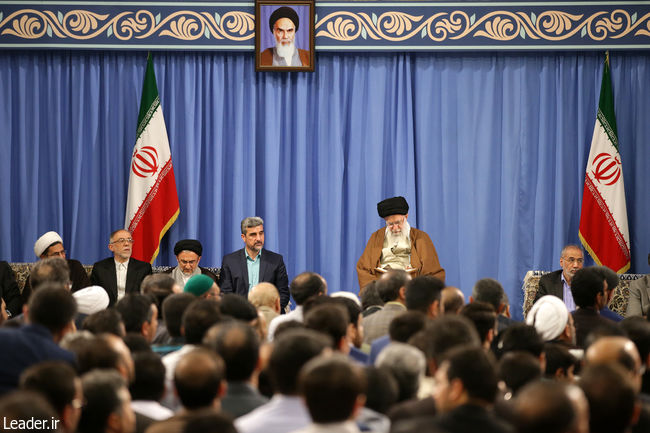 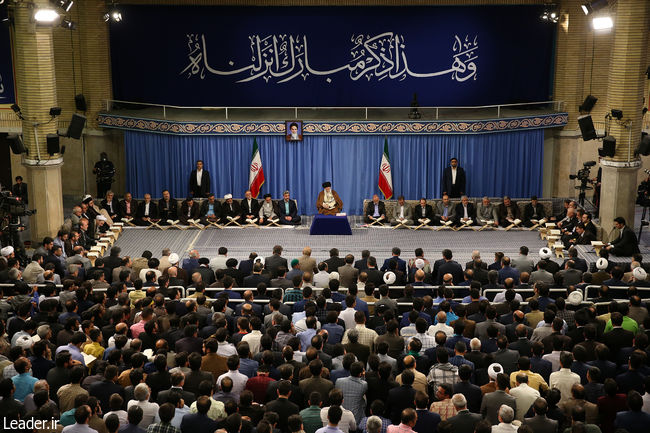 On the eve of the beginning of the Month of Ramadan, a ceremony of establishing bonds with the Holy Quran was held oon May 6, 2019, at the Hussayniyah of Imam Khomeini (r.a.) with the Supreme Leader of the Islamic Revolution-- Ayatollah Khamenei-- in attendance.

In this meeting, Ayatollah Khamenei praised the Holy Quran as a divine masterpiece that attracts the hearts and asserted: The Quran is a matchless artistic work. The first factor in attracting the hearts to Islam like a strong magnet was the artistic dimension of the Quran.
The Supreme Leader regarded recitation ceremonies as occasions to celebrate the artistic aspect of the Quran and held: This artistic masterpiece should be performed artistically. When you have an audience and you recite the Quran in a ceremonial manner, you should impress the audience. Here the artistic aspects should play a role. The audience can be impressed by the art. This is what is meant by the recitations we listen to, praise and approve of. Of course on the condition that this artistic recitation is done in a correct way.
Ayatollah Khamenei advised reciters to recite the Quran in a way that emphasized the meanings of the divine Script, maintaining that: I have repeatedly advised our friends to recite the Quran in a way that emphasized the meaning to the audience. For instance, Sheikh Abdul Fattah Shashaey and Mustafa Ismail put proper emphasis on the sentences and words. Some reciters understand what they are doing and they recite in a way as if you are being addressed by the word of God.
The Leader of the Islamic Revolution advised the audience against heedless ways of applauding the reciters and held: Regarding Quranic gatherings where you applaud the reciters by saying “Allah- Allah”, [I would like to mention that] there are people who do that copying the Arabic Quranic recitations ceremonies they have only listened to. Some people merely try to imitate that. It is good to applaud them, however, I have seen that sometimes when there are foreign reciters here reciting the Quran, the audience siting here feel that they have to applaud them loudly after each verse recited. This makes the reciter realize that you have not properly understood his recitation! Because he does not recite well and you do not notice that.
Ayatollah Khamenei went on to say: Of course, I am not against you applauding Iranian reciters, there is nothing wrong with that. But when there is a foreign reciter, do not feel that you have to applaud them by saying “Allah-Allah” after each and every verse they recite.
The Leader of the Islamic Revolution reminded his audience of the Quranic advise to distrust the oppressors and stressed: Ignoring the Quranic advise not to trust the oppressors is predicament of the people of the world today. They trust the tyrants and they become miserable. We have witnessed that there was some sort of awakening, some sort of enthusiasm among Islamic countries but like a burning flame that is put out by pouring ashes over it, it was extinguished. Because they relied on the U.S. and the Zionist regime. They did not realize what they had to do.
Ayatollah Khamenei further added: If God the Exalted assist a nation and that nation fails to appreciate that divine assistance, they will be knocked down and slapped across the face.
The Supreme Leader praised the memory of Imam Khomeini for his leadership in acting upon the Quran and said: Our nation appreciated that and since day one of the great movement by our nation, the persistence of the revolution, the resistance of the nation and the extraordinary progress of the country have owed it to acting upon the Quran thanks to the leadership of Imam Khomeini.
Finally His Eminence added: Imam Khomeini taught us how to act and we took action. Today the path is the same and there is no option but to resist the devils and the unbelievers.