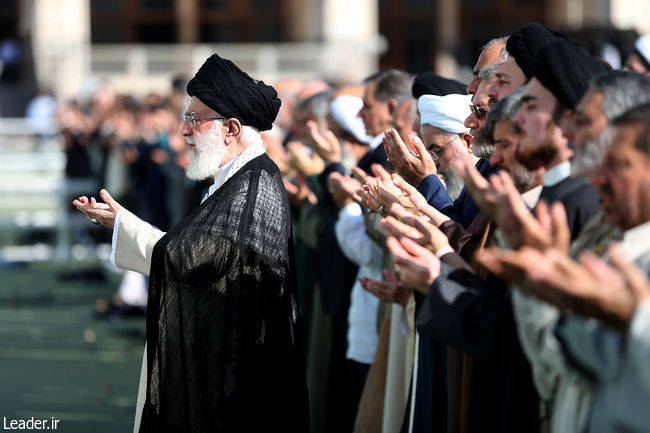 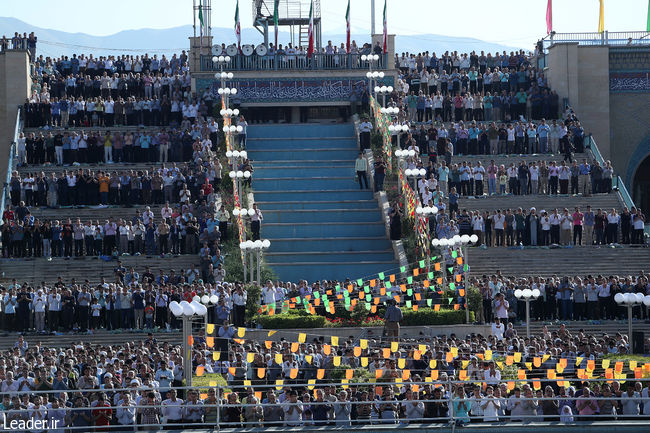 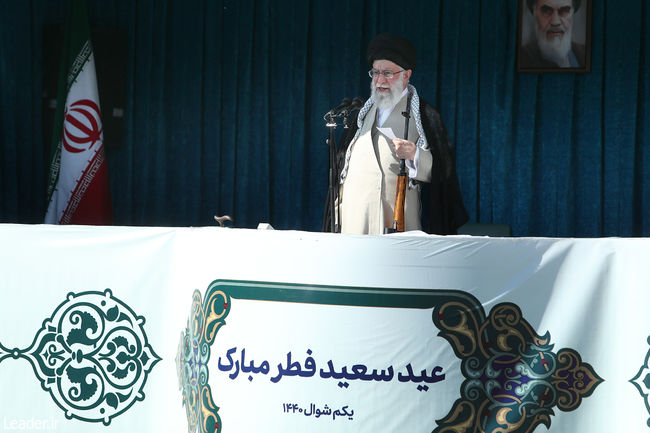 As the magnificent Eid al-Fitr prayers are held across the nation, thousands of believers in Tehran performed Eid prayers at Mosalla of Imam Khomeini as led by Ayatollah Khomeini—the Leader of the Islamic Revolution— on June 5, 2019.

Ayatollah Khamenei slammed heads of Muslim states that betray the Palestinian cause and asserted: The treason committed by some Muslim states has lead them to blatantly perpetrate treasonous acts related to the question of Palestine.

Referring to the Arab summit in Bahrain, the Supreme Leader stated: The summit that is to be held in Bahrain belongs to the U.S. But the rulers of Bahrain, with their various weaknesses and faults, and their anti-democratic and anti-Islamic spirit have laid its foundations and have committed themselves to the organization of this summit. This summit aims to help realize the treasonable and wicked plot by the United States— what they have called as the "Deal of the Century".

His Eminence reminded his audience that the move by Saudi and Bahraini governments will turn to their detriment and held: The rulers of Bahrain and Saudi Arabia do not understand what a quagmire they are stepping into. This will of course not succeed and the Deal of the Century will never gather momentum by the grace of God, God willing.

The Leader of the Islamic Revolution appreciated the Muslim countries that refrained from partaking in the treasonous summit and maintained: We appreciate those Muslim and Arab countries, as well as Palestinian groups who opposed it.

Ayatollah Khamenei expressed hopes the Saudi and Bahraini governments will realize what a grave mistake they are making, adding that: We hope the rulers of Bahrain and Saudi Arabia comprehend what a quagmire they are stepping into and what damage this will do to their own future.

The Leader of the Revolution praised public promotion of simple Ramadan iftar food and private donations of several billions to this cause, and maintained: The people and the officials should not forget the flood-affected populations.    `

His Eminence went on to say: Another aspect of Ramadan, this year and every year, is helping the people and the trend to support the underprivileged, which is increasing day after day, thanks to God.
Simple iftars, as recommended, were organized by the people: in mosques, hussainiyas, streets, and main squares; iftar gatherings were organized and the people participated. Different people, even those financially less well off could take part in these public iftar gatherings.

Ayatollah Khamenei described public participation in massive charity works as amazing and stated: Later there was a call for iftar; people welcomed the call and contributed; billions were donated and spent for iftar. These are amazing great works that are being developed— All praise is due to God— as blessed Islamic habits among our people.

Praising people’s efforts to offer help to the victims of recent floods in Iran, the Supreme Leader declared: Ramadan help by the people to the victims of the flood was noteworthy. I must remind here, both our brothers and sisters all over the country, and our respected officials, not to forget the problems of those affected by the floods.

Ayatollah Khamenei reiterated the significance of persistent relief operations for the victims and added: The question of the flood-stricken people is important. It should be followed up sincerely, and their problems must be solved with utmost seriousness; especially in those areas such as Khuzistan Province where the temperature is rising and the hot weather of this and the coming season is unbearable. This is one of our urgent responsibilities to be attended to.