In a meeting with spokesman of Yemen’s Ansarallah Movement 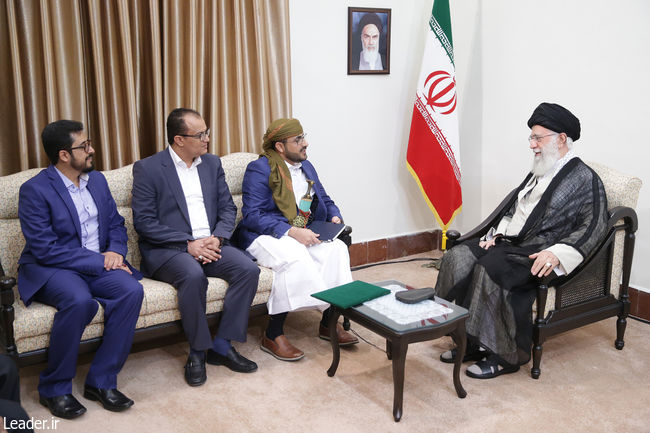 The spokesman of Yemen’s Ansarallah Movement and his entourage met with Ayatollah Khamenei—the Leader of the Islamic Revolution— on August 13, 2019.
During the meeting, a letter from Sayyid Abdul-Malik Badreddin, the leader of Ansarallah Movement, was offered to the Leader.
In this meeting, the leader of the Islamic Revolution appreciated faith, resistance, intelligence and jihadi spirit of the Yemenis against a brutal and extensive invasion, and stressed: Every devout nation that believes in the Exalted God and the divine promise, will surely become victorious. Accordingly, the oppressed and mujahid Yemeni nation will undoubtedly be victorious.
Ayatollah Khamenei expressed congratulations and condolences on the martyrdom of Ibrahim Badreddin, Sayyid Abdul-Malik Badreddin’s brother, and while praising the great and mujahid Badreddins, and commemorating martyr Hussain Badreddin, he went on to say: Thanks to their profound and historic civilization and their spirit of mujahidah and resistance that they have demonstrated during the past five years, the Yemeni people will have a bright future. By God’s grace, they will establish a strong government, and they will progress within the framework of that government.
Stressing that the Saudis, Emiratis and their supporters— who have committed major crimes in Yemen—will definitely fail to achieve their goals, his Eminence stated: They seek to separate Yemen; so you should stand strong against this conspiracy, and support a united Yemen, with territorial integrity.
The Leader of the Revolution went on to say: Given the religious and ethnic diversity of Yemen, maintaining the integrity of the country requires Yemeni-Yemeni dialogues.
Referring to Saudis’ and their allies’ crimes in Yemen, especially on the day of Eid al-Adha, Ayatollah Khamenei articulated: What is happening in Yemen today reflects the reality of today’s world and the bogus of Human rights advocates.
Reiterating the Islamic Republic's anti-American and anti-Western stances, the Supreme Leader maintained: This stance does not emerge from fanaticism. It is based on facts as well as the West’ and U.S. officials' actions, who commit the most heinous crimes, while faking a humane, civil, and ethical face and constantly preaching about human rights.
The Leader of the Islamic Revolution described the West's indifference regarding the crimes committed in Yemen and Palestine as an example of the realities of today's World and added: These criminal powers must be confronted with the power of faith, resistance, and reliance on divine assistance and this is the only way.
Pointing out the sanctions and different pressures imposed on the Islamic Republic of Iran since the victory of the revolution, especially during the 8-year imposed war, and the difficulties of procuring basic defensive needs, Ayatollah Khamenei asserted: Despite 40 years of sanctions, the Iranian nation—through perseverance, faith, and jihad—have developed important abilities in defensive arms.
Towards the end of the meeting, while announcing support for the efforts of faithful and resistant men and women of Yemen, Ayatollah Khamenei asked the Yemeni delegation to convey his greetings to the dear Mujahid brother, Sayyid Abdul-Malik Badreddin and the faithful and resistant Yemeni nation.
At the beginning of this meeting, Mr. Mohammed Abdessalam—the spokesman for Yemen's Ansarallah Movement— conveyed cordial greetings by Mr. Sayed Abdul-Malik Badreddin, the leader of Ansarallah Movement, and all Yemeni fighters and Mujahideen to the leader of the Islamic Revolution and said: We consider your leadership to be the continuation of that of the prophet of Islam (PBUH) and Imam Ali (a.s.) and we consider your stance inspired by Imam Ali (a.s.) in support of the oppressed people of Yemen in accordance with Imam Khomeini and a source of blessing and very heartwarming.
Stressing the fact that the Leader’s stance on supporting the world’s oppressed— in particular, the Yemeni people—represents a religious and faith-derived stance, he said: the Yemeni people who face a very difficult situation have been standing against the invasion of seventeen states, while possessing little equipment but strong faith and perseverance. We promise you that the Yemeni nation will continue unitedly to resist against the invasion and oppression until complete victory is achieved.