In a meeting with a group of school and university students

Ayatollah Khamenei: Talks with the US not to solve any problem 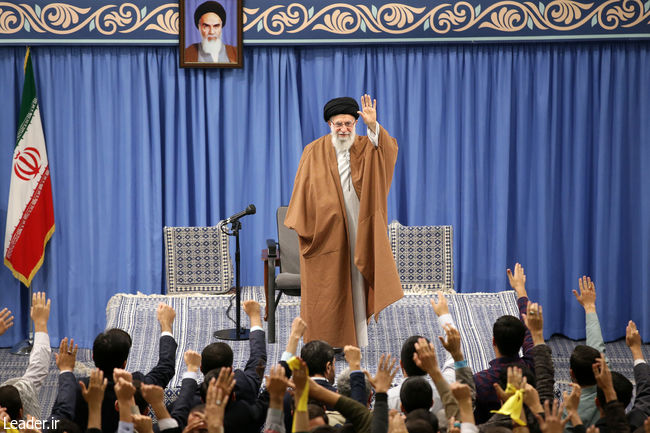 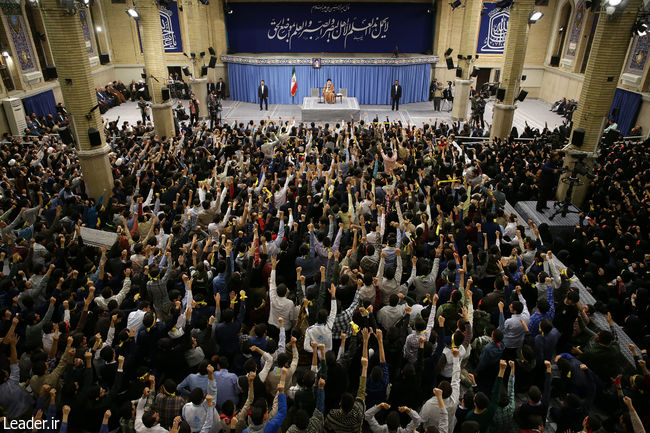 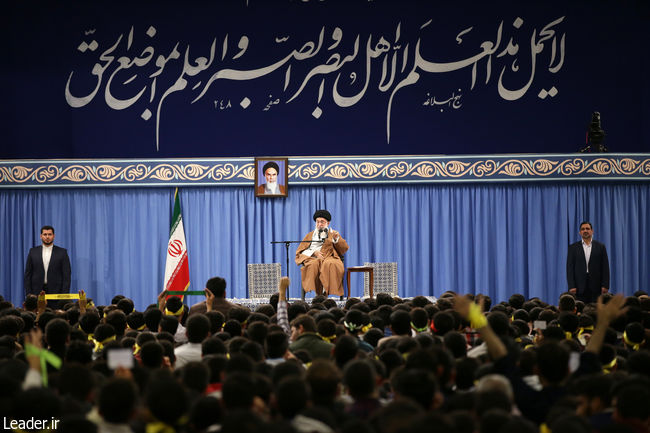 Ahead of the National Day of Fighting Global Arrogance and the National Day of Students, a group of school and university students met with Ayatollah Khamenei— the Leader of the Islamic Revolution— at the Hussayniyeh of Imam Khomeini, on November 3, 2019.
In this meeting, Imam Khamenei stated, “The U.S. has not changed since November 1964 when its puppet regime exiled our beloved Imam Khomeini, up until now, November 2019. The U.S. is the same. The same aggressive, vicious behaviour and the same international dictatorship has continued. Today, it has become weaker than in 1964, but it has become more brutal and impudent.”
The Supreme Leader added, “The U.S. has always been an enemy of the Iranian nation. Even during the tyrannical Pahlavi regime before the revolution, when they overthrew a national government in 1953 - the government, which of course had made the mistake of trusting the United States - and established their corrupt and puppet government in Iran.
Some distort history and pretend that the Iran-U.S. disputes stem from the capture of the spy den (the U.S. embassy in Tehran). This is not true and is a distortion of history. The dispute between the Iranian nation and the U.S. government dates back to the 1953 coup d'état, and before that, when they imposed a corrupt puppet regime on the Iranian nation.”
The Leader of the Revolution stressed, “The Islamic Revolution was basically against the U.S., and the people shouted anti-American slogans. Since 1979 and up until today, during the last 41 years, the U.S. has carried out all the hostile actions it knew against the Iranian people, including coups, ethnic provocations, arousing separatism, sanctions, sieges, etc. Of course, we were not inactive and did everything we could to confront the U.S., and in many cases, we managed to corner and debilitate them. Our most important response to the plots of the United States was to block the political re-infiltration of the country by the U.S.”   He also added, “Avoiding negotiations is one of the ways to block American infiltration. This is obviously hard on the U.S. government. The imperialist America, which normally talks to other countries from a position of power, has for years insisted on negotiating with the leaders of the Islamic Republic, but the Islamic Republic has refused. This means that there is a nation and government in the world that does not recognize the usurpation, tyrannical power, and international dictatorship of the U.S.”
The Leader of the Revolution insisted, “This prohibition on negotiations is based on a firm logic. It blocks the enemy’s infiltration, shows the world the greatness of the Islamic Republic, and destroys the false greatness of the U.S. in the eyes of the world. Some imagine that negotiations will solve the problems. This is one hundred percent wrong. The U.S. wants to show Iran that it has been brought to its knees by accepting to negotiate. They want to prove that the policy of maximum pressure has been the right choice, and then they will not concede a single point after that.”
The Leader continued on to explain, “If the officials of the Islamic Republic had naively negotiated, not only they would not have gained anything, the sanctions and pressures would not have been reduced, and there would have also been new demands as soon as the negotiations had started, ‘You are not allowed to have missiles…’
Today, our youth make missiles with a range of 2,000 km, and a precision of 1 m, capable of targeting any place they want. They demand that these missiles be destroyed and that our missiles have a maximum range of 150 km. If you accept, you will lose everything, and if you don’t, there will be no change in their approach.
The experiences of Cuba and North Korea are before your eyes. American and North Korean officials took photos and expressed love for each other. However, the sanctions weren’t reduced at all by the Americans.
This is how they negotiate. They would have claimed to have forced us to our knees, and would not have given away a single point.”
Imam Khamenei also stated, “The French president acts as a mediator. He contacts us and sends messages, saying that a single meeting with the U.S. president will solve all the problems. Either he is very naive, or he is an accomplice of the U.S.”
The Leader of the Revolution concluded, “Negotiating with the U.S. will not solve any problems. We tested this – although I was certain of it, but we wanted it to become clear for everyone – asking for the sanctions to be removed, and their return to the JCPOA, in order to negotiate in the framework of that agreement. But they did not accept.
They have new demands, and Iran will not accept these demands. They demand that we remain inactive in the region, refrain from helping the resistance, and give away our missiles. Later, they will demand that we do not insist on Hijab (the Islamic covering) and other laws. Their demands are endless. The U.S. seeks the position it had before the Islamic Revolution, but the Revolution and the Islamic Republic are stronger than this.”