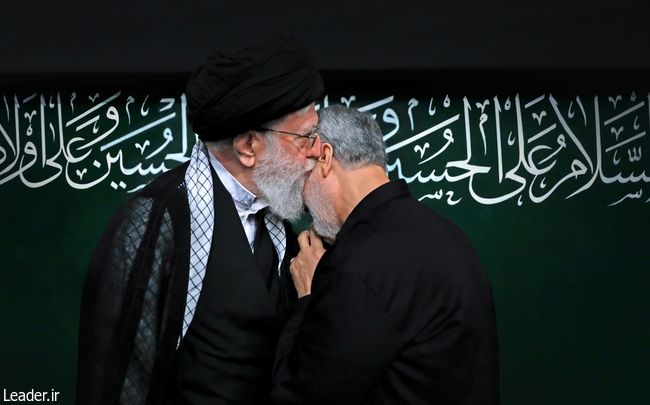 Following the martyrdom of the honorable general of Islam—Hajj Qasem Soleimani— and the martyrs accompanying him, particularly the great fighter of Islam, Mr. Abu Mahdi Al-Mohamdes, the Leader of the Revolution issued a message.

In the Name of God, the Beneficent, the Merciful
Dear Iranian Nation
The great and accomplished Sardar has become heavenly.  Last night, the untainted souls of the martyrs embraced the pure soul of Qasem Soleimani.  After years of sincere and courageous jihad against the devils and evil-doers of the world and after years of wishing for martyrdom in the path of God, alas, dear Soleimani attained this lofty station and his pure blood was spilled by the most vile of humans.
I congratulate Hazrat Baqiyatullah- may our souls be sacrificed for him- and his own pure soul on this great martyrdom and I express my condolences to the Iranian nation.
He was a stellar example of those educated and nurtured in Islam and the school of Imam Khomeini (ra). He spent his entire life engaging in jihad in the path of God.
Martyrdom was his reward for years of implacable efforts. With his departure and with God's power, his work and path will not cease and severe revenge awaits those criminals who have tainted their filthy hands with his blood and the blood of the other martyrs of last night's incident.
Shahid Soleimani is the international face of the resistance and all who have a heart-felt connection to the resistance seek his blood revenge.
All friends- and indeed all enemies- should know that the path of jihad and resistance continues with increased motivation and certain victory awaits the mujahideen on this blessed path.
The absence of our dear and self-sacrificing Sardar is bitter, but the continuation of the resistance and its final victory will be more bitter for the murderers and criminals.
The Iranian nation will cherish the name and memory of the towering martyr, Shahid Sardar Marshall Qasem Soleimani, together with his fellow martyrs especially the great mujahid of Islam the honorable Mr. Abu Mahdi al-Muhandis.I declare three days of public mourning in the country and I congratulate and express my condolences to his honorable wife, dear children and family.
Sayyid Ali Khamenei
13th of Dey, 1398