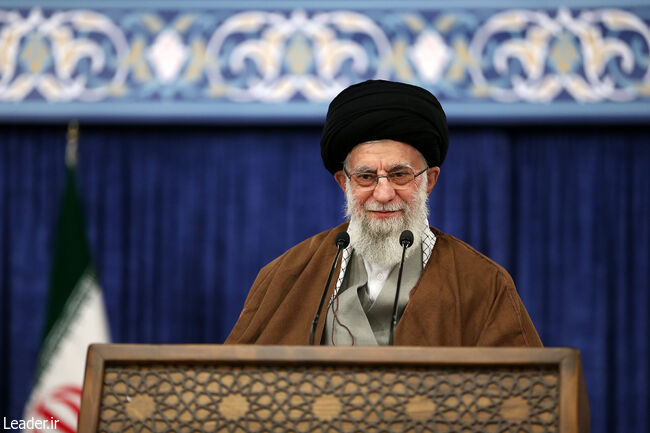 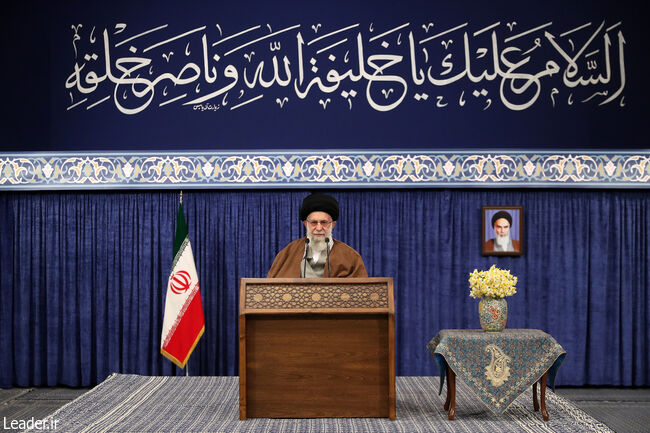 In the Name of Allah, the All-beneficent, the All-merciful.
The Leader of the Islamic Revolution inaugurated the new Iranian year 1400 as ‘the year of production, support and removal of obstacles’. The aim for this unprecedented slogan for this year is for a surge in industrial production which must be fully implemented with total support and removal of obstacles.
Speaking on the festival of Nowruz, the Supreme Leader of the Islamic Revolution, Ayatollah Khamenei congratulated the nation, especially the families of the martyrs and war veterans. With the opening of the new Islamic solar year 1400, which this year coincides with the blessed Islamic month of Shaban and the birth anniversary of the Master of the Time, Imam Mahdi (may Allah hasten his reappearance), Ayatollah Khamenei conveyed his best wishes and felicitations of material and spiritual blessings on the nation. He designated the year 1400 as ‘the year of production, support and removing of obstacles’.
Ayatollah Khamenei recollected the past year which included many unprecedented events, especially the Covid-19 pandemic. He recalled the tragic consequences of the pandemic that has blighted the lives of everyone including businesses, schools, religious gatherings, recreational activities and travel and has subsequently generated mass unemployment in the country. Ayatollah Khamenei said he considered the deaths of tens of thousands of people from the virus to be the most tragic of all events of the past year and he expressed his sympathy to the affected families and prayed for divine mercy and forgiveness for the victims.
Ayatollah Khamenei described 1399 as the year of demonstration of the Iranian nation's capabilities in tackling the severe effects of Covid-19, as well as in handling the immense pressure placed on the country by its enemies. He said, "Our beloved nation has shown its administrative skills in its medical and health institutions through its researchers and scientists, hard workers and sincere servants, despite the sanctions and the blockage of foreign support. Indeed, the people have demonstrated their extraordinary abilities and experience in managing this pandemic”.
Ayatollah Khamenei commended the defeat of the ‘maximum pressure strategy’ placed on Iran by the enemies as another shining example of the nation’s capabilities. He said, "The enemies of Iran, led by the United States, were trying to bring the Iranian nation to bow before them. But of course, we knew that the nation would remain standing and they would fail for sure.  Today, the Americans and their European friends have admitted that the maximum pressure strategy has failed”.
Ayatollah Khamenei went on to assess the achievements of the past year, named ‘the year of surge of production’. He said, "According to numerous public and government reports, the surge of production has reached an acceptable degree in some parts of the country”.
The Supreme Leader of the Islamic Revolution added, "Of course, this rate of progress is not as expected, because although we recognise the completion of work in the industries of construction and infrastructure, the results are not yet visible nor felt in the public economy as well as people's lives. It was expected that this progress would produce better economic conditions in easing people's lives".
He added, “The success of the surge in production will produce economic growth in the country, empowering the value of the national currency, as well as strengthening national confidence, public satisfaction and national security".
Ayatollah Khamenei identified the reasons for the failure to fully increase production in 1399 due to obstacles and a lack of support for production in all sectors. He added that national production had also been discouraged due to a weakness in the law which has led to problems caused by import of foreign goods as well as smuggling. He emphasised that smuggling by ‘treacherous hands’ was the cause for the failure in national production.
The Supreme Leader of the Islamic Revolution called for the creation of incentives, including investment incentives, as a necessary element for increasing national production. He said, "The business situation in the country should be such that people are encouraged and motivated to invest in production and at the same time, production costs should be minimised”. He considered low incentives in the production sector as well as the high cost of production to be an obstacle in moving forward.
Ayatollah Khamenei was nevertheless hopeful for the future and said, "The revolutionary move towards a mass increase in production began in 1399 and was welcomed by the people and this movement should be continued into the year 1400".
Ayatollah Khamenei said that this year is all the more critical due to the upcoming elections as well as the need for a suitable base for an increase in national production. He said, “In June 2021, elections are taking place with the potential for a new administration with more powerful motivation and efficiency which can make this year the more important and influential for the country”.
The Supreme Leader of the Islamic Revolution added, "In 1399, the surge in production has created a momentum in the country, which can flourish well into the new year". He continued, "This year, both the current government and the upcoming government must work with all its potential and support in order to demonstrate in its true sense a surge in production and must remove all of its obstacles”.