In meeting a group of Air Force and Air Defense commanders, the Commander-in-Chief said:

The combined attack against the joint attack of the enemy front 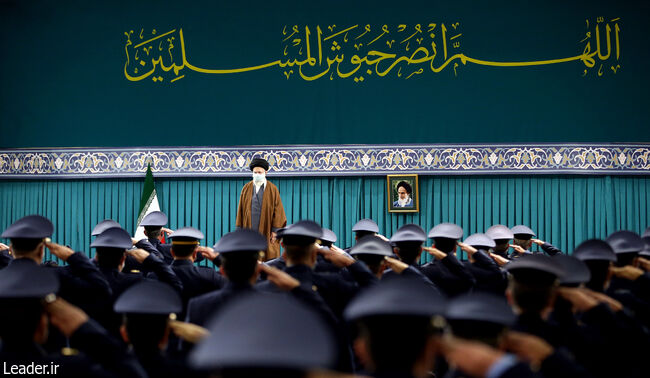 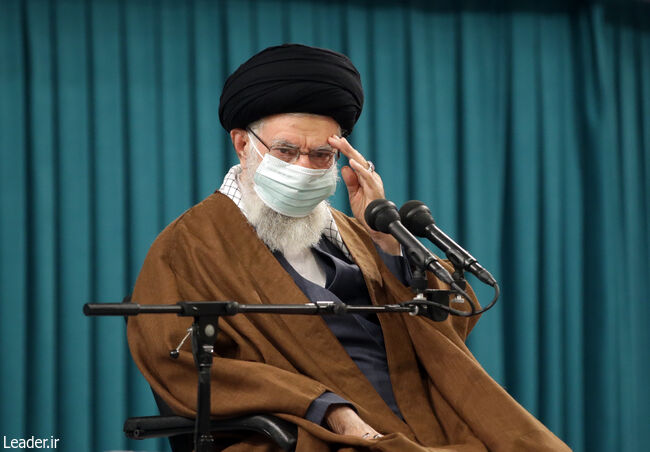 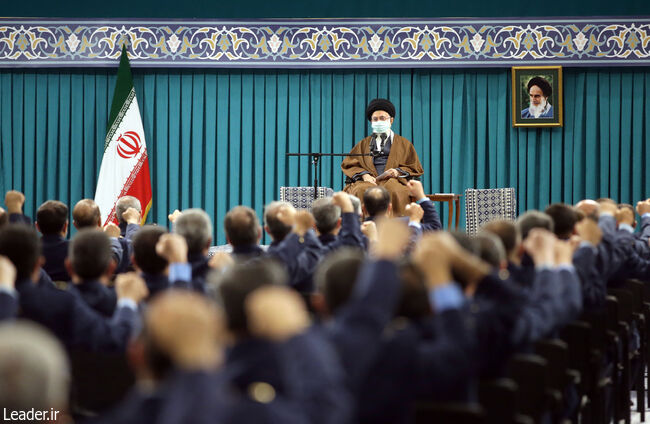 On the anniversary of the historic Homafaran allegiance to Imam Khomeini on February 10, 1979, the Supreme Leader of the Islamic Revolution, in a group meeting with the commanders of the Air Force and the Army Air Defense, called that astonishing allegiance a turning point emphasizing that the cause of permanence, continuity and impact of that tremendous and historical movement was media work and correct narration of that story in an artistic framework, he said: Today, countering the enemy's aggression to distort the facts, achievements, progress and epic actions of the Islamic system requires a defensive movement and combined attack with a focus on the immediate and definite duty of clarification jihad.

At the beginning of the meeting, Ayatollah Khamenei, referring to the limited number of attendees due to the unfavourable conditions of Corona, said: I am always bound by the rules of health and follow the advice of doctors. I insisted on using the mask, and a few months ago, I received the third dose of the vaccine. He advised the people to do whatever doctors and specialists deem appropriate and follow the procedures.

Ayatollah Khamenei then referred to the historical movement of the Air Force in allegiance to the Imam and noted: Although the current generation of the Air Force was not present that day, all those who work in the Air Force with a sense of responsibility share in the honour and virtue of that day, because that movement was in fact allegiance to the ideals and holy jihad that Imam was its powerful commander, therefore, that spiritual movement continues, and all those who are in the path of those ideals, participate in that movement. The Supreme Leader of the Islamic Revolution described one of the essential features of that very effective move as "recognizing the need of the moment" by the chiefs and fellow Air Force officers and carrying out that intelligent action based on insight and said: The move also showed that the calculations of the United States and the infamous Pahlavi regime were wrong and they were hit from somewhere they could not have imagined. Ayatollah Khamenei, in expressing the most important lesson of that historical event, added: If the forces of the Front of Truth and Islam have an active, effective and hopeful presence in every jihadi field, including military, scientific, research and other fields, and are not afraid of the apparent glory and magnificence of the other side, the enemy's calculations will definitely turn wrong. This is an inviolable divine promise.

He noted: Even today, Americans' calculations are wrong, and they are being hit from a place they did not previously imagine, which is also from their own presidents, that is, the former and current presidents of the United States have practically joined hands with their actions give away the remaining reputation of America.

The Supreme Leader of the Islamic Revolution, in expressing the depth of the movement of the Air Force that day, pointed to its continuation after the revolution in various fields and added: The formation of the self-sufficiency jihad of the Air Force in the very first days of the revolution, the neutralization of conspiracies and coups in some bases and the outstanding actions of the Air Force during the holy defence, all indicate that the February 10, 1957 movement was formed based on depth and spirit of insight and for this reason, prominent martyrs such as Sayad Shirazi, Babaei, Sattari, Kolahdooz, Fakuri and Fallahi appeared in the Air Force and the Army.

Ayatollah Khamenei assessed one of the reasons for this depth and insight in the Air Force as their close relationship with American advisers during the dictatorial regime and observing their dictatorship, domination and moral corruption and noted: The presence of the Americans in the Iranian military is a sad story that the younger generation may not know about, But an example of this was the repeated use of the Iranian military by the United States and Britain to suppress the oppressed nations, which is one of the betrayals of the Pahlavi regime to the Iranian army and nation, as well as a crime against other nations. Emphasizing the importance of "clarification jihad", the Supreme Leader of the Revolution considered the published photo of the Homafaran allegiance with Imam Khomeini as an example of the lasting effect of the explanatory work and said: the longevity factor and impact of that historic and transformative event was the same artistic picture frame that was published with the limited media facilities of the day, and this shows the irreplaceable effect of accurate narration of events. Referring to the spread of various types of media in different contexts, he considered the defiant policy of anti-Islamic and anti-Iranian media as a distortion of facts by using professional lies and added: To implement this policy, they even seek to embellish the image of SAVAK crime by embellishing the ugly and corrupt face of the dictatorial regime and covering up their betrayals and on the contrary, by tarnishing the image of the revolution and the great Imam, they completely conceal the progress, facts and positive points of the revolution, and magnify the weaknesses hundreds of times, so in the face of this media aggression, jihad is a definite and immediate duty.

Ayatollah Khamenei called the media dictatorship one of the types of the dictatorship of the Western powers, despite their claim to freedom of expression, and pointed to examples such as the removal of the name and photo of Martyr Soleimani in cyberspace: They ban any word or image that contradicts Western policies and, in return, make the most of this space to destroy Islam and the Islamic Republic. In the face of this bitter reality, he considered it the duty of everyone, especially the officials and custodians of the national media and the owners of all kinds of media, to come to the fore and narrate the correct progress and great services of the revolution and added: Great and epic works have been done during these decades in various fields such as economic, social, civil, educational, health, industrial, religious and cultural, diplomacy and politics, defence and security, however, due to the shortcomings, there is not much reflection and news of these astonishing actions in the country's media collection, while each of them is a heading for clarification jihad.

The Supreme Leader of the Revolution said: "Some economic and livelihood problems should not be allowed to dust on these progressions and epics and remove them from the eyes of the people and be forgotten."

Ayatollah Khamenei also referred to the "combined attack" of the enemy front against Iran, i.e. economic, political, security, media and diplomatic aggression and emphasized: In the face of this collective and mass aggression, we cannot always remain in a defensive position, and we must also launch combined attack in various fields, including media, security and economics, in which the people of thoughts and action, especially officials, are obliged to work.

At the end of his speech, he considered the increasing progress of the country against the will of the ill-wishers as promising a better tomorrow for the nation. He said: As the Islamic Republic has progressed with power during these 43 years and has become stronger and more entrenched day by day, this movement will continue better in the future through divine opportunity than in the past, and the enemy will fail again. Ayatollah Khamenei also referred to the blessed days of Rajab and advised people, especially the youth, to exploit the divine and spiritual blessings of this month.

Before the speech of the Leader of the Islamic Revolution, Brigadier General Hamid Vahedi, Commander of the Military Air Force, gave a report on the activities, progress and plans of this force.