The Leader in a meeting with the Chairman and representatives of the Assembly of Experts:

The cure for this complex war is the jihad of clarification 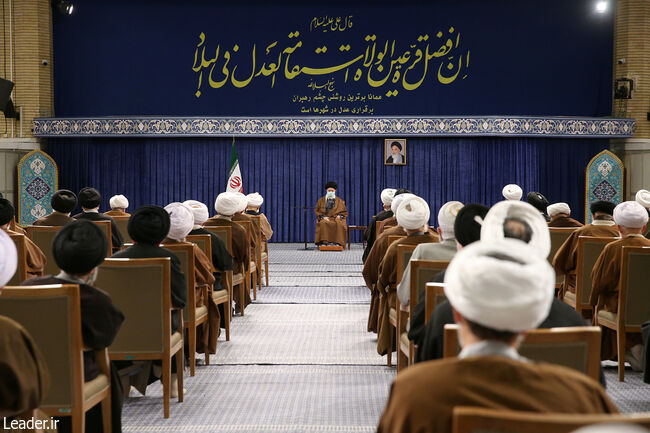 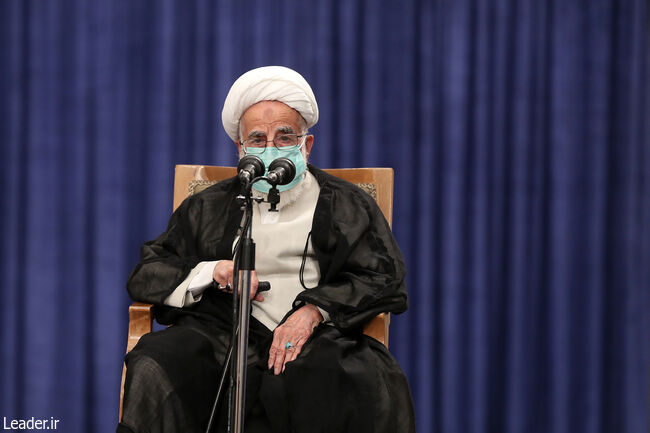 This morning (Thursday), the Supreme Leader of the Islamic Revolution, in a meeting with the Chairman and members of the Assembly of Experts, expressed the importance of livelihood and the ease of it in the various aspects of people's life, stating the elements of the joined collection of national power and strength and referred to the soft and hard war of the enemies to seduce and influence the people and  the elites, adding: The cure for this complex war is the jihad of clarification with "new software methods based on the deep and sublime teachings and concepts of Islam." Congratulating the Sha'baniyah Eids, especially that of mid-Sha'ban, he considered this Eid as a day of flourishing human historical aspirations and referring to the spiritual greatness of the month of Sha'ban and the great content of Sha'baniyah prayers, he said: Imam Khomeini (RA) was more attached to the Kumayl and Sha'baniyah supplications, and we hope that God will provide all the spiritual capacity to use the blessings of this month as much as possible.

Ayatollah Khamenei considered the strength of the system the cause of national power and strength and said: National power is vital to any country, and any nation who wants independence, pride, the use of vital resources of its own free will, and resistance to the demands of others, must be strong. Otherwise, it has to constantly worry about the greed of outsiders, in weakness, humiliation and fear.

The Supreme Leader of the Revolution called national power a compound affair and an interconnected collection and, in expressing its pillars, added: "Science and Technology" and "reflect and thinking and free minds" are among the pillars of national strength, and if there is no free mind and intellectual progress, science and technology will not open the way. He called "Security and Defense Power", "Economy and Public Welfare and ease of People's Livelihood", "the power of politics and Bargaining for National and Regional Interests in the region and global scale", "Culture and Lifestyle", and "Attractive logic and its Impact on other nations" the other arms of national power. He said: The attraction of nations creates a strategic depth for each country, which is very important.

Ayatollah Khamenei made an important point, adding: "None of the arms of national power should be cut off in favour of one pillar and the other arm." Citing several examples in this regard, he called proposals such as renouncing the presence in the region so to not give an excuse to the enemy or abandoning scientific progress in the Nuclear Field, a blow to national power and added: The presence in the region gives us more strategic depth and national strength. Why should we give it up? Nuclear science progress is also related to meeting the needs of the country in the near future, and if we ignore it, who and where will we approach a few years on? The Leader of the Revolution considered falling short in front of the United States or any other power to be safe from sanctions a great mistake and a blow to political power, and added in another example: There is no one more naive and clumsier than the one who says reduce the defence so as not to sensitize the enemy.

He emphasized: Over time, these weak and flawed proposals have all been mentioned, which were all revocable and were revoked, and if those who wanted to cut off the arms of national power were allowed to do so, Iran would be in great danger today. With the will and care of God, the possibility to implement these proposals was never created.

The Supreme Leader of the Revolution, in paying more heed to the pillars of national authority, added: Issues that directly reflect the masses, such as "national unity, national trust, public hope, national self-confidence, the preservation of national faith, the issue of public livelihood and its smoothness and ease of social issues related to people" is crucial in increasing national power.

He called the provision of such issues leading to one hundred per cent presence of people on the scene. He added: Of course, despite various problems, people have always been on the scene, but if these issues are taken care of, the nation will be on the scene in unity and there will be no more sorrow and fear for the country.

Ayatollah Khamenei considered the irreplaceable effect of people's presence on the scene the reason for the devils' attempts to seduce people and said: with the help of media, the devils are constantly promoting lies and embellishing baseless words to reduce public faith and confidence in order to dishearten and disappoint the nation.

He considered the seduction of elites with the ultimate goal of seducing the people as an important agenda of the enemies and said: in the heaviest soft war in history with the Iranian nation, the arrogant of the world are trying to seduce those who have the title, facility and are possibly literate to deceive people and distance them from truth and reality. The Supreme Leader of the Revolution called "raising mercenary and embezzler, threats and bribery" among the various methods of the enemy and added: This heavy soft war, of course, shows the strengthening of the infrastructure and facilities of the Truth Front, which has made the challenge with the Truth Front difficult and led the enemy to a soft war to destroy the minds of the people. He considered a large number of elites with insight, motivation and faith in the seminary and the university, especially the various groups of young people, as real obstacles against the struggles of the enemy and emphasized: The way to deal with the complex soft war of the enemy, as we have said many times, is clarification Jihad, that is the same as what Amir al-Mu'minin called "jihad with tongues" in a letter to Hasnain (as). Before starting the points about the requirements of clarification Jihad, the Supreme Leader of the Revolution called the approval of heavy budgets in the Islamic Consultative Assembly for clarification Jihad wrong and ineffective and said: I do not agree with this approach to the issues, and past experience has shown that these budgets are often wasted. He added: "Of course, the officials who receive these budgets in the Irshad Ministry and the Islamic propagation organization are faithful, healthy and reliable people, but the nature of this work is wrong, and we hope the officials will pay attention to this issue." Ayatollah Khamenei then considered the necessity of success in the clarification jihad as "updating the tools in soft war" and noted: Just as old tools can no longer be used in hard wars, we must upgrade our tools in soft wars, although some old methods, such as the pulpits and eulogies, are still effective and irreplaceable. The Supreme Leader of the Revolution described the situation of the country in the hardware sector of soft war and cyberspace as relatively good and, of course, in need of improvement and efforts of the President and his colleagues and said: But the software part, that is, expressing new words in attractive ways, needs to be strengthened and innovated. He called the best and most effective weapon in soft war "explanation of advanced Islamic concepts" and added: In the field of epistemological issues, Islamic lifestyle and expression of Islamic governance rituals such as being amongst people, religious and doctrinal, noble and is not extravagant oppressive and not being oppressed and many other unspoken, attractive and sweet words exist that are to be well explained for the world. Ayatollah Khamenei called another aspect of the clarification jihad "separating the path of progress and material excellence of the nation from the misguided and wrong paths" and said: This separation does not mean separation on the basis of kinship and party interests, but must be separated and clarified on the basis of belief in Islam and the Qur'an and the great movement of the Islamic system.

In the end, Ayatollah Khamenei considered the shortcoming in the jihad of clarification and even the tools of religion the cause of its misuse by the secularists and emphasized: If the jihad of clarification is not implemented correctly, the secularists will use religion as a means of lust and desire, just as the Bani Omayyah did in the early days of Islam. At the beginning of the meeting, Ayatollah Jannati, Chairman of the Assembly of Leadership Experts, and Hojjat-ul-Islam Wal-Muslimin Raisi, the Chairman of the Assembly, presented a report on the speeches and opinions of the delegates at the meeting, especially those concerning culture and economic.