The Leader of the Islamic Revolution in the shining circle of closeness to the Quran: 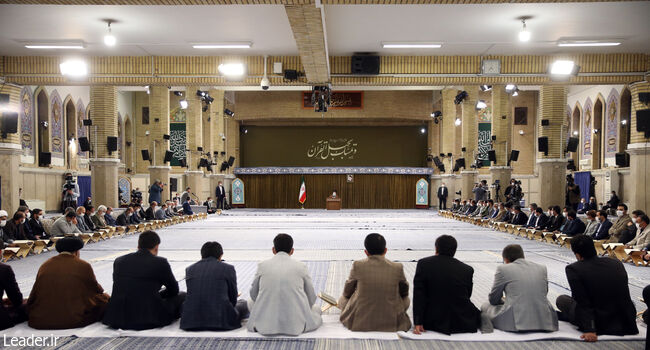 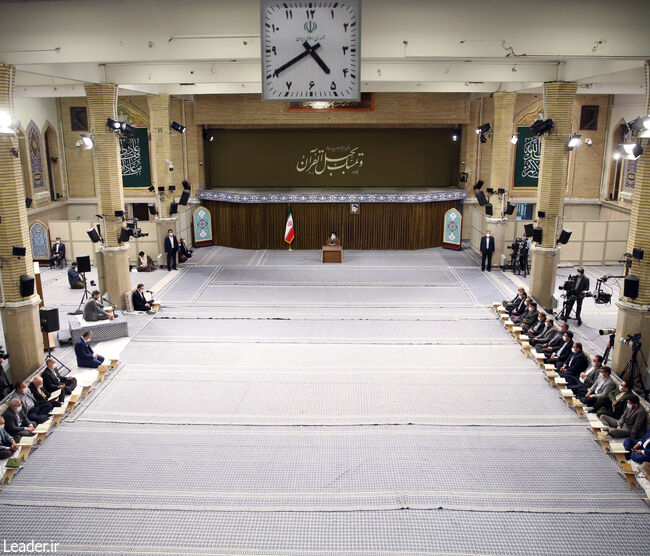 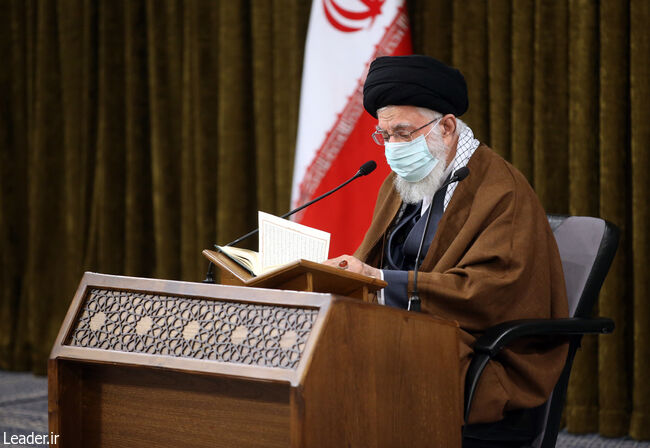 The Supreme Leader of the Islamic Revolution, on the first day of the holy month of Ramadan in the shining circle of closeness to the Qur'an, called Ramadan the month of feasting and the infinite expansion of the divine mercy. He called purgation of the heart and proximity to the Qur'an accompanied by contemplation and understanding some crucial factors in benefiting from God's feast.

Ayatollah Khamenei mentioned that entering God's grand ceremony requires human effort to fulfil Allah's invitation. Then he added: "If we succeed in joining God's feast, we will be given a unique welcome by having an opportunity to get closer to God; nothing higher than that can be imagined.

Referring to the blessings and opportunities of actions in the holy month of Ramadan, he added: "These blessings are, in fact, irreplaceable opportunities for getting closer to God; therefore, we must humbly and submissively ask God to make us successful in benefiting from this opportunity and avoiding sins."

Referring to the verses of the Qur'an, the Leader of the Revolution considered "Dhikr" as one of the blessed names of the divine book and in contrast to negligence, which is a great calamity, and added: "constant recitation and closeness to Qur'an leads to more connection with God."

Ayatollah Khamenei called Qur'an the eternal miracle of the Seal of the Prophets and added: the Qur'an, in all periods of human history, has provided the knowledge needed by human beings in the vast and great scene of individual, family, social, and spiritual life, governmental affairs and all the other dimensions.

He considered education, contemplation and understanding, which is profound teaching and learning, as the secret to benefiting from the deep awareness and high knowledge of the Qur'an. He added: "The condition for achieving this knowledge is the purgation of the heart and purity of soul, which is much easier when you are younger."

Then The Supreme Leader of the Revolution made a few points regarding the matter of recitation and addressed the reciters of the Qur'an.

Expressing satisfaction with the abundance of prominent and talented reciters in our country, he attributed this gift to the Islamic Revolution. He said: "Today, our reciters recite on a higher level and with better quality than many reciters from other countries who are sometimes even invited to Iran as masters, and this is an honourable fact."

Ayatollah Khamenei added: "Of course, the work should not be considered done, and we should move forward and perfect the imperfections, because wherever a person considers the path over and stops, that will be their downfall, and this is my advice to all activists, including writers, poets and religious scholars."

In his following advice, he called recitation a sacred art and emphasized that this art should be in the service of Dhikr and invitation to God; he said: Recitation should be in a way that increases the listener's faith. Therefore, recitation should not be seen as just a form of art, and it should not be allowed that some news or some ostentation overcome the state of Dhikr and invitation to God.

The Leader of the Revolution considered the subject of "recitation engineering" to be needing special attention from the reciters and added: "Recitation engineering means to recite in an appropriate way that deeply affects the listener and makes them to follow the word of God."

Ayatollah Khamenei assessed the Quranic activities in the country as good but insufficient. In a proposal to expand these activities, he said: turning mosques in every neighbourhood into a Quranic centre, and interacting and communicating with other mosques in that neighbourhood and holding Quranic meetings and competitions among them is the best encouragement for teenagers and young adults to enter the arena of Qur'an, and especially to train the as memorizers of the Qur'an.

He added: "The way to train 10 million memorizers which we proposed a few years ago is to introduce teenagers to the field of Quranic activities, and such projects can help to make it happen."

In this circle of closeness to the Qur'an, a number of reciters recited verses from the words of God. Also, panegyrics and praising were some of the other parts of this shining ceremony.