The Leader in a meeting with the President of Tajikistan:

Relations between two countries should undergo a fundamental change 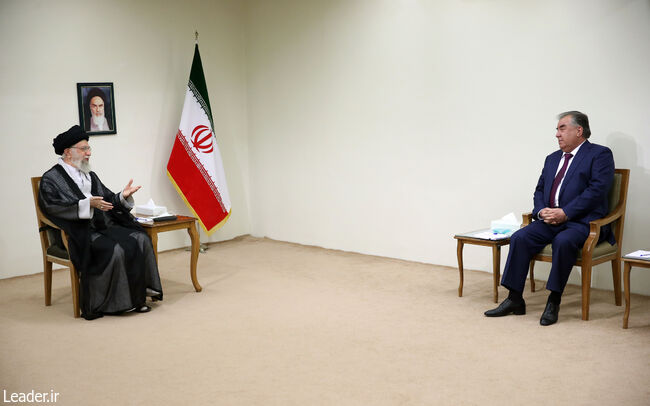 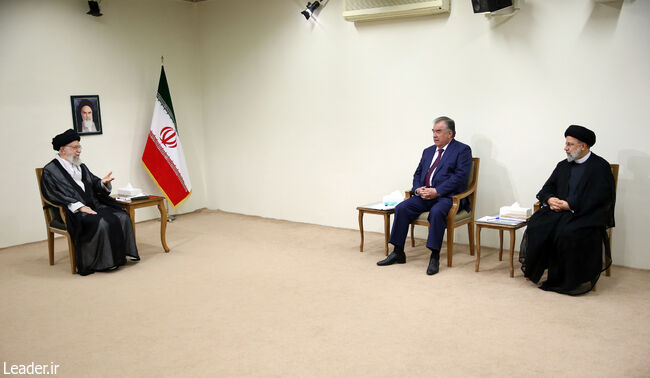 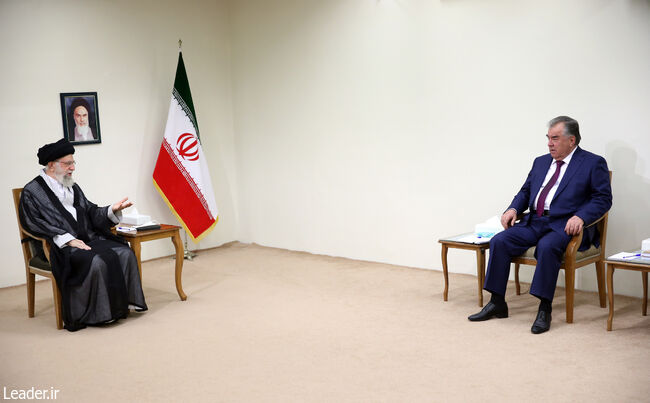 This evening (Monday), Ayatollah Khamenei, the Supreme Leader of the Islamic Revolution, during a meeting with the Tajik President Emomali Rahmon and his accompanying delegation, emphasized: The potential for expanding cooperation between the two countries in various fields is far beyond the current level, and according to the policy of the Iranian government to strengthen relations with neighbours, relations between the two countries should undergo a fundamental change.

The Supreme Leader of the Islamic Revolution called the two countries relatives and brothers, referring to the deep historical, religious, cultural and linguistic commonalities between Iran and Tajikistan.

Ayatollah Khamenei praised the efforts of Tajikistan's President to spread the Persian language, and referred to the first foreign visit of Mr Raisi to Tajikistan and stressed: The visit showed the commitment of the government to expand relations with Tajikistan. The level of ties has increased in the past year, but it is far from the desired point. He appraised Iran's technical, engineering, industrial and scientific capabilities to help Tajikistan as essential and significant potential, adding: In order to use these capacities and seriously expand cooperation, the Joint Commission must seriously plan and schedule all the signed documents to reach the operational stage.

The Supreme Leader of the Islamic Revolution mentioned the diverse climate of Iran and the vast lands and plains and scientific, technological and industrial developments and knowledge-based companies in Iran, as well as abundant water and extensive mines in Tajikistan as grounds for promoting cooperation, noting: Despite the sanctions, the Islamic Republic of Iran has made good progress in various fields, and if it were not for the sanctions, these improvements would not have been achieved because the sanctions made us rely on our internal strengths and capacities.

Ayatollah Khamenei called the sanctions the weapon of the powers against the countries and emphasized that what disables this weapon is to pay attention to the internal forces and capacities. Stressing that one of the areas of cooperation and consensus between Iran and Tajikistan is regional issues, especially the situation in Afghanistan, he said that Iran and Tajikistan share common concerns about Afghanistan. Both countries are concerned about the spread of terrorism and the growth of Takfiri groups in the country. We believe that the men in power in Afghanistan should be able to use all groups in a comprehensive government. The Supreme Leader of the Islamic Revolution also referred to the recent visit of the Iranian Chief General of Armed Forces to Tajikistan and the inauguration of a UAV factory and noted the importance of such cooperation, saying: "UAVs are an important factor in the security of countries today." In this meeting, which the President also attended, Mr Emomali Rohman expressed great satisfaction with his presence in Tehran and meeting with the Leader of the Islamic Revolution; and referred to his talks with the President of Iran and said: Good discussions were held in various fields, including trade, economic and industrial relations, and according to the signed documents, it is hoped that with your guidance, the ties between the two countries will expand even more.

He cited security concerns, especially about Afghanistan and the spread of terrorism, as important issues between the two countries, adding: "We want peace and stability and a government with all ethnicities in Afghanistan, and we hope increasing security cooperation between Iran and Tajikistan, can help overcome concerns."