The Leader, in response to the Palestinian Islamic Jihad Movement’s General Secretary 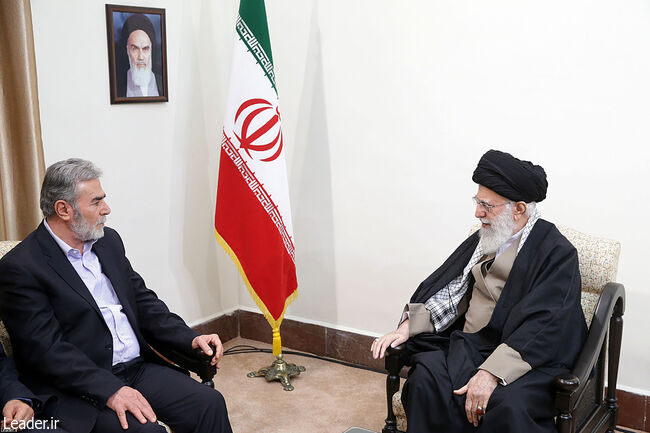 Ayatollah Khamenei, in response to the letter of Mr Ziyad al-Nakhalah, Secretary General of the Palestinian Islamic Jihad Movement, considered the courageous resistance of the Islamic Jihad movement to be the reason for the elevation of this movement's position in the [Axis of] resistance and neutralization of the deception of the Zionist regime and defeating it and emphasizing the need to preserve the integrity of all Palestinian groups he noted: The usurper enemy is getting weaker, and the Palestinian resistance is getting stronger.

In the name of Allah, the Compassionate, the Merciful

My Mujahid brother, Mr Ziyad al-Nakhalah, -May Allah grant the continuation of your successes-

I received your honourable letter. May God reward you well and hasten the final victory of the proud and oppressed Palestinian nation.

In his letter, Mr Ziyad al-Nakhalah pointed out the widespread presence of Palestinian mujahids, especially the Islamic Jihad movement and the military wing of Saraya al-Quds, throughout Palestine, especially in Gaza and the West bank and emphasized: With the presence of Jihad resistance battalions, not a day passes without clashes with the Zionist regime in the West Bank.

In explaining the situation in Gaza, the Secretary General of the Islamic Jihad Movement pointed out the robust stand of this region against the occupying regime and added about the recent three-day clashes: We called these conflicts "Wahda al-Sahat" (the unity of the fields) to emphasize the unity of our nation against the enemy, which is trying to destroy this unity with all its power and conspiracies.

Ziyad al-Nakhalah emphasized that in this war, the entire occupied Palestinian land was under the range of the Islamic Jihad resistance missiles and said: This battle disturbed the estimates of the Zionist regime in such a way that within three days, they were forced to request a ceasefire and accept the terms of resistance.

The Secretary General of Islamic Jihad called this achievement of the resistance a prelude to more remarkable victories of the Palestinian nation in the future and thanked the role of the Hezbollah movement under the leadership of Sayyed Hassan Nasrallah, as well as Iran's support and endorsements in all dimensions to the leadership and guidance of the leader of the Islamic Revolution and added: If it weren't for your constant support and standing, this victory and past victories would not have been achieved.