The Leader meets the people, officials and guests of the Islamic Unity Conference

The world's geopolitics is changing; the Islamic Ummah can have a high position 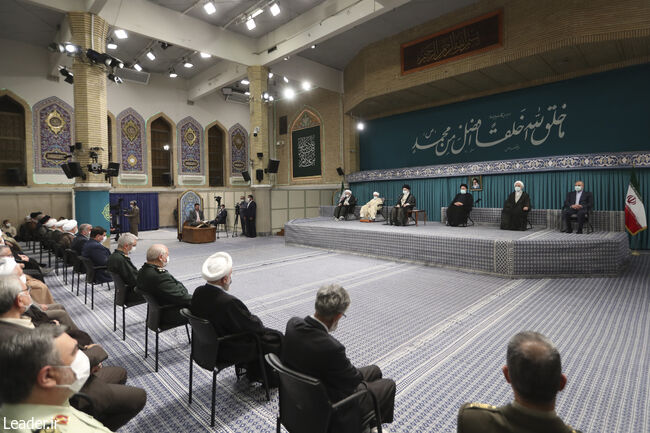 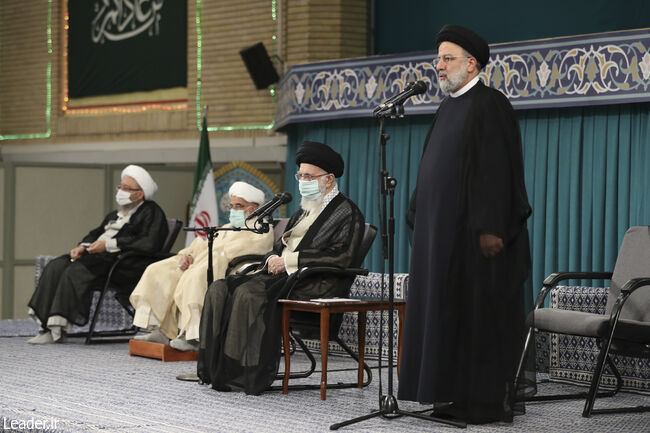 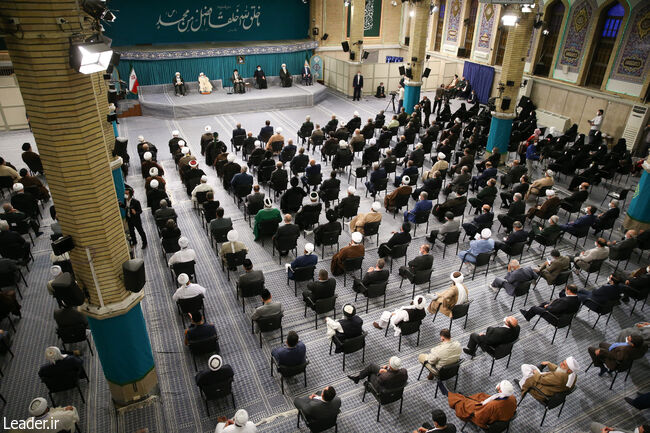 Coinciding with the 17th of Rabi' al-Awwal, The Birth Anniversary of the Holy Prophet of Islam (SAWAS) and Imam Sadiq (a.s), the Leader of the Islamic Revolution, today, in a meeting with a group of government officials and foreign guests participating in the Unity Conference, considered unity and cohesion as the most critical needs of the Islamic Ummah for playing a role and achieving a high position in the new power geometry and referring to the crucial position of the wise and enlightened youth of the Islamic world for the realisation of this goal, he said: "Islamic unity" and an influential presence in the new world is possible and doable under the condition of practical efforts and standing in the face of hardships and pressures, which a clear example of this is the system of the Islamic Republic, which did not give up in front of the powers and stood its ground, and now it has become a strong tree that Even the idea of "cutting it down" is not possible.

In this meeting, the Leader of the Islamic Revolution congratulated The Birth Anniversary of the great Prophet (SAWAS) and Imam Sadiq (a.s) and emphasised the unique personality of the Prophet of Islam (SAWAS), the culmination of which is his prophetic mission, and said: Celebrating The Birth Anniversary of the Holy Prophet of Islam (SAWAS) should be an opportunity for the Islamic Ummah to learn and set the Holy Prophet as a shining example for a "good role model".

He considered the forced result of division and separation to be "humiliation" and "distance from dignity" and emphasised: The task of the influential people and nobles of the Islamic world is to focus on creating practical ways and grounds for unity between Muslims Because the enemy, on the other hand, by creating a cancerous cell in the region and on the land of Palestine, in the name of the fake Zionist regime and the establishment of evil, corrupt, murderous and ruthless Zionists in it, is seeking to create the biggest friction between Muslims and Islamic countries.

The Leader of the Islamic Revolution called the normalisation of relations between some Islamic countries and the Zionist regime one of the biggest betrayals and said: Some may say that it is not possible to achieve unity in the current situation with the presence of some heads of Islamic countries, but the intellectuals, scholars, sages and elites of the Islamic world can make the atmosphere different from what the enemy wants, in which case the possibility of achieving unity will be easier.

He added that: Correct understanding of the interests of the Islamic Ummah and with whom and how Muslims should be friends or enemies and reach a common ground against the plans of arrogance is very important for the realisation of unity.

The Leader of the Islamic Revolution emphasised that the important and fundamental point in joint action is to reach a common understanding about changing the political geometry in the world and said: The geopolitics of the world is changing, and the unipolar system is moving towards rejection, and the dominance of global arrogance is losing its legitimacy more and more every day, so, a new world is being formed, and the very important question is, where is the position of the Islamic world and the Islamic Ummah in this new world? Ayatollah Khamenei emphasised: In such a situation, the Islamic Ummah can have a high position and be a model and leader in the new world, provided that it can reach unity of speech and free itself from the division and temptations of America, Zionists and big companies.

By asking another question, "Is unity of speech of Muslims and having a high position in the changing world possible?" he said: Yes, unity between Islamic nations is possible, but it requires effort and action and standing in the face of pressures and hardships.

The Leader of the Islamic Revolution emphasised that, in this case, the greatest hope lies in the properties of the Islamic world and enlightened youth and their role in guiding public opinion, and added: An example of the possibility of influence is the Islamic Republic of Iran, where a small sapling stood against the two superpowers of that time under the guidance of Imam Khomeini (r.a), and that sapling has now become a strong tree which even the thought of cutting it down by anyone would be a mistake.

Ayatollah Khamenei, emphasising that the realisation of Islamic unity is necessary to prevent religious differences from turning into conflicts, noted: American and British politicians who are against the very principle of Islam have entered the Shia and Sunni debate in their own circles, which is very dangerous.

Recalling his past interpretation of "British Shia" and "American Sunni" and the attempt of some to distort it, he said: A British Shia and an American Sunni means someone who is in the service of the enemy in any position and rank and country, like ISIS, by creating fights and divisions.

The Leader of the Islamic Revolution expressed regret for the crimes of ISIS in Iraq, Syria and especially the killing of students in Afghanistan and added: On both the Shia and Sunni sides, some extremists have nothing to do with Shi'a and Sunni Islam, and these extremisms should not be a basis for accusing the principle of religions, and severe action should be taken against those who, in the name of favouring one religion, provoke the feelings of the other side.

He considered the increasing hardships, pressures and killings in Palestine and other parts of the Islamic world to be the result of the "dispersion of the Islamic Ummah" and pointed to the many commonalities of Muslims; he said: Until now, the Islamic Republic of Iran has used everything in its power to realise the Islamic unity, a clear example of which is the all-round support for the Sunni brothers in Palestine, and this support will continue with all its might.

The Leader of the Islamic Revolution, emphasising that the Islamic Republic supports the resistance front formed in the Islamic world, noted: We believe in the grace and care of Allah and hope for the practical realisation of the great dream of Islamic unity.

At the beginning of this meeting, in his speech, the president of I.R Iran called the great Prophet the best summoner of humankind to justice, rationality, spirituality and morality, and by enumerating the efforts of the enemies of the prophetic movement to assassinate the Prophet's character, he added: Today, in the anti-Islamic front lining up against the followers of the Prophet, the same efforts are going on in the form of cultural and economic terrorism, but just as they could not stop the globalisation of the Prophet's movement that day, they will not be able to stop the nation adhering to the Prophetic values.

Hujjat al-Islam wal-Muslimin Raisi considered the cause of the enemy's hatred of the Iranian nation to be its stunning and all-round developments and noted: In a recent trip to New York, the Secretary General of the United Nations apologised in a private meeting and said that despite many efforts, I could not lift the sanctions related to the Coronavirus against Iran, to which I replied to him the nation of Iran has always made opportunities out of threats and sanctions, and in the case of Corona, we became exporters with the activation of six vaccine production centres, and today we are among the top countries in the world in dealing with this disease.

Referring to the statistics of scientific progress, economic growth, reduction of inflation and increase in commercial and international cooperation of our country, the president thanked the people for their sincere cooperation with the government, especially in the implementation of economic reforms and said: The enemies of Iran sought to cause trouble for the country in the recent disturbances, but the people defeated them with patience and perseverance as before.

Hujjat al-Islam wal-Muslimin Raisi considered hiding the facts and spreading modern ignorance among the current tricks of the ill-wishers of the Islamic world and added: The way to counter this trick is to spread awareness on the axis of Islamic unity and avoid division.