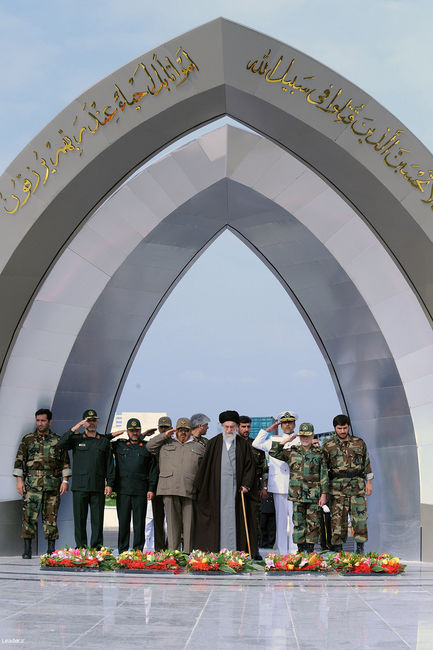 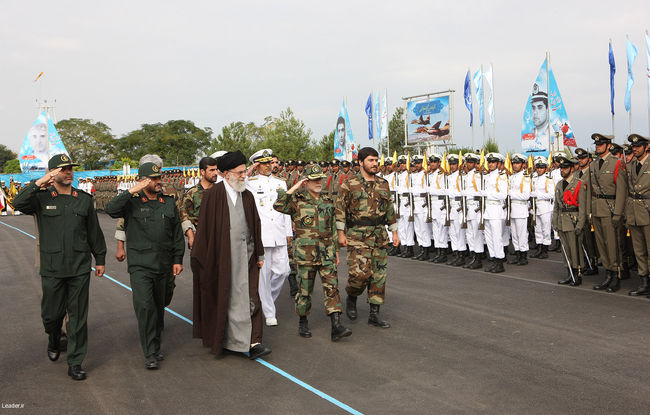 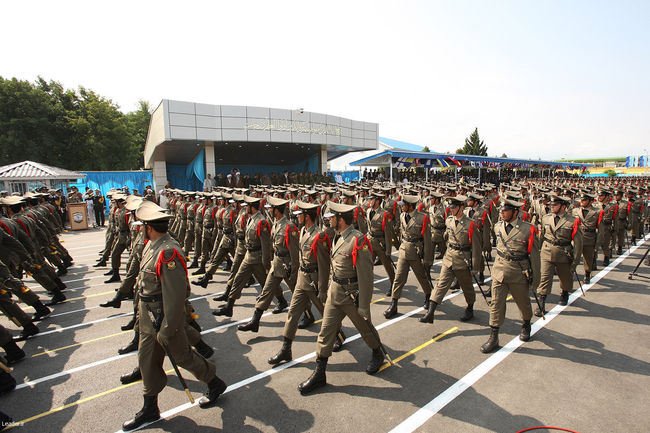 "The great might of the Islamic republic, its manoeuvres and defense advances are no threats for the neighbors and other nations. These are opportunities for them to gain in self-confidence," Ayatollah Khamenei said adding," These are opportunities that show them the path of pride and progress. Dignity and might will not be gained by depending on America and by endless purchase of weaponry. It relies on faith and self-confidence."

In a joint ceremony of graduation, oath-taking and epaulet-giving of the cadets of military universities of the Islamic Republic of Iran's Army Tuesday morning, the Commander-in-Chief of the Armed Forces, Ayatollah Sayyed Ali Khamenei regarded young officers and enthusiastic and faithful youth of different parts of the country as pioneers of moving towards a world full of peace, justice and friendship.

"The world bullies will fail in materializing the Iran-phobia project, because the national might of the Islamic Republic is not only no threat for nations but also an example for progress, dignity of nations," stressed Ayatollah Khamenei.

Briefly after the Commander-in-Chief of Armed Forces entered the field of Imam Khomeini Naval Sciences University in Nowshahr, the national anthem of the Islamic Republic was played.

Standing in front of the martyrs' memorial, he asked the Almighty God to grant the martyrs of the Islamic homeland especially the Navy's brave martyrs, higher graces in the heaven.

The IR Leader then reviewed the forces deployed in the field, showing kindness to the war-disabled veterans present in the ceremony.

The Commander-in-Chief of the Armed Forces regarded the decisive influence of armed forces in preserving the security of great Iran and the readiness of these forces for sacrificing their souls on the way of defending the system and country, the main factors for the great importance and proper respect that the nation and the system consider for the armed forces.

He also regarded the brave youth of the Army's military universities as the strong pillars of the Islamic Republic of Iran's might.

The IRI Leader referred to necessity of increasing the country's might in the current full-of-struggle world adding," The armed forces are the front line and the clear sign of the Iranian nation's might."

Ayatollah Khamenei regarded achieving the real might as the right and duty of every nation adding, "The faith in God is the main element in real might, and under its light, the will, spirituality and scientific, political and economic progress are also gained."

The Commander-in-Chief of the Armed Forces considered the Zionist regime's shameful defeat in confrontation with Lebanon's faithful youth and Gaza's faithful people and America's failure in the war with the people of Iraq and Afghanistan as strong reasons for proving the ineffectiveness of the might based on weapon, force and money.

Ayatollah Khamenei noted that the bullying powers who are imposing their demands on the nations are doomed to collapse.

Ayatollah Khamenei regarded Iran's defensive advances as incomparable within past 30 years, addressing the young officers of the armed forces, " The glorious peak on which you stand today was unpredictable 30 years ago, even in the most optimistic views."

Pointing to IRI's scientific and arms progress in the world, Ayatollah Khamenei said aliens were creating Iran-phobia in the region and the world, adding, "Of course the enemy cannot deny these realities. Its main objective is to make nations and countries afraid of the Islamic Republic of Iran."

"The great might of the Islamic republic, its manoeuvres and defense advances are no threats for the neighbors and other nations. These are opportunities for them to gain in self-confidence," Ayatollah Khamenei said adding," These are opportunities that show them the path of pride and progress. Dignity and might will not be gained by depending on America and by endless purchase of weaponry. It relies on faith and self-confidence."

The Leader of the Islamic Revolution said that the future of the world belongs to faithful nations and under firm will and true goals of the faithful and independence-seeking nations, a world free form aggression, cruelty arms race and terror would be existed.

Ayatollah Khamenei termed the youth of the Islamic Iran as forerunners of setting up such a world and added that peace, prosperity and justice are new and bright messages of the Iranian nation to all other nations. The enthusiastic Iranian youth should use all their talents to materialize these goals.

Ayatollah Khamenei, the Commander in Chief of IRI armed forces termed presence of the armed forces in the front line of defending and serving the country as great glories and privileges of these forces and advised them to take serious research and seeking knowledge and add to their great privileges and honors for the sake of the country's progress.

The Leader of the Islamic Revolution termed the IRI Navy as a strategic force for the country and highlighted the role of its commander and great potentials for the progress. He urged continuation of promotion of the naval forces' capabilities.

Ayatollah Khamenei said the Army, the Islamic Revolution Guard Corps (IRGC), Basiji forces and the Police are the sons of the great Iranian nation family. The IR Leader also urged unity and affection among all parts of the armed forces.