The meeting with the family of Martyr Commander Haj Qasem Soleimani

As a blessing of that precious blood, the resistance is more prosperous 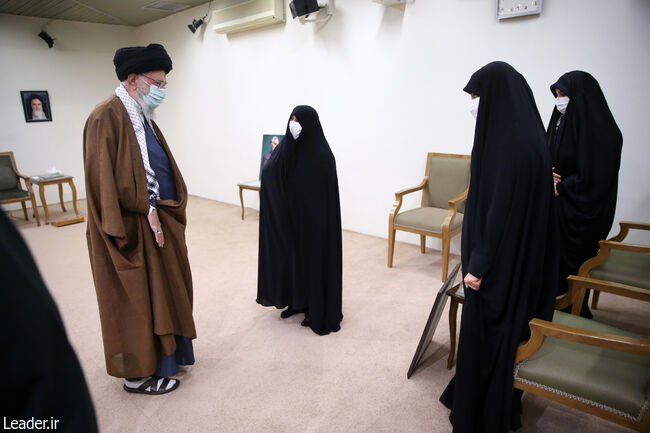 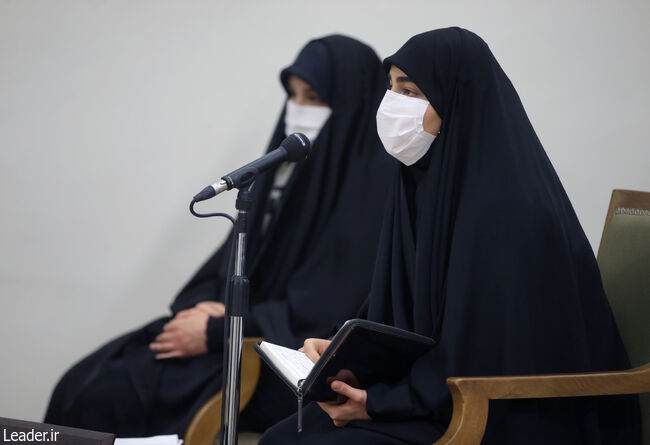 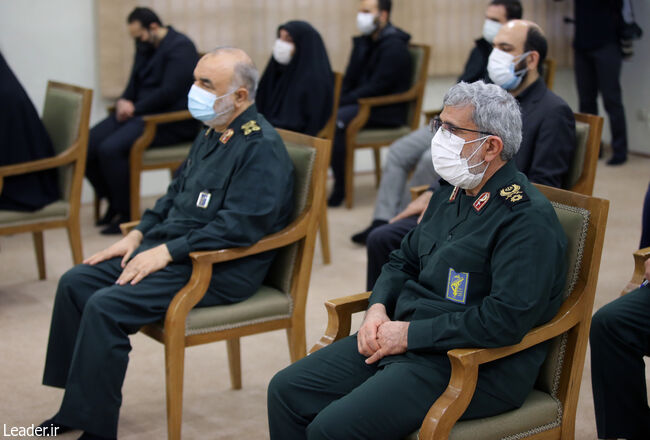 The Supreme Leader of the Islamic Revolution this morning (Saturday) in a meeting with the family of Martyr Haj Qasem Soleimani and some of his comrades, called "truth" and "sincerity" a summary and a symbol and indicator of Soleimani school and referring to the role of Haj Qasim among the youth of the region, he added: Dear Soleimani was and is the most national and champion figure of Iran and the Islamic world. The Supreme Leader of the Revolution called the martyrdom of Commander Soleimani a national incident and an Islamic international incident and added: The popular and innovative commemoration of Hajj Qasem throughout Iran shows that the nation is in the lead in appreciating this great martyr. Citing several verses of the Holy Quran, he said: Truthfulness and sincerity are the essence and shaper of the Soleimani school, which blessed both his life and his martyrdom, and the quality of his martyrdom, by the grace of God, gave the ultimatum to all the servants of God and the enemies of Islam.

Ayatollah Khamenei called Commander Soleimani's completely sincere adherence and loyalty to the covenant he had made with God and Hajj Qasim's sincere interaction with the Imam and the ideals of Islam and the revolution a blessing of Commander Soleimani's activities and added: the beloved Commander of the Iranian nation, endured the suffering of the struggle for the ideals with all his being and was carefully and faithfully faithful to his duties towards the Iranian nation and the Islamic Ummah throughout his life. Criticizing those who, willingly or unwillingly, follow the line of the enemy in promoting the false duality of "nation and ummah", he said: Hajj Qasim proved that he could be the most national and at the same time the most prominent. Referring to the presence of tens of millions of people in the funeral of the holy body of Commander, the Supreme Leader of the Revolution added: This fact shows that Hajj Qasim was and is the most national figure. At the same time, the growing influence of his memory and name in the Islamic world proves that dear Soleimani was and is the most prominent figure in the Islamic world.

Ayatollah Khamenei described Hajj Qasim as a manifestation of tireless and astonishing effort and work and added: The heroic Commander of the Iranian nation, in all his endless works and activities, had an admirable level of courage and bravery, and at the same time rationality entered the battlefield accurately knowing the enemy and his facilities and tools, without a shred of fear, with strength and tact and did amazing things. He regarded the praise of the nation for Commander Soleimani's courage as one of the results of Hajj Qasim's sincerity infidelity to the divine covenant. The Supreme Leader of the Revolution considered "sincerity and work for God" as another characteristic of Martyr Soleimani and an irreplaceable blessing in his work and added: He was fleeing from being seen and was not a man of pretence and boasting, and that funeral of tens of millions and the spread of his name and memory in the world was the first reward and divine honour for his sincerity in the world.

Referring to martyr Soleimani as a model and hero of the youth of the Islamic world and the region, he said: Today, Soleimani is a symbol of hope, self-confidence, courage and the secret of endurance and victory in our region, and as some have rightly said, Soleimani "martyr" is more dangerous to his enemies than Soleimani "the commander". Ayatollah Khamenei added: "The enemies thought that with the martyrdom of Soleimani, Abu Mahdi and his companions, the work would be over, but today, thanks to that dear and oppressed blood, the United States has fled Afghanistan. In Iraq, it is forced to pretend to leave and announce the role of an advisor without the presence of the military, which, of course, the Iraqi brothers must follow with vigilance. In Yemen and Lebanon, the resistance front is advancing; in Syria, the enemy is grounded and has no hope for the future, and in general, the current of resistance and anti-arrogance in the region is working and moving today more prosperously, happier and more hopeful than two years ago. The Supreme Leader of the Revolution, citing an example of Martyr Soleimani's deeply kind treatment of the children of the martyrs, noted: That dear martyr, with that spirit of compassion towards the families of the martyrs, against the evildoers and corrupters inside and outside, was so decisive and intense that even the news of his presence in an area destroyed the spirit of the enemy. He considered the elimination of the arrogant's treatment of Martyr Soleimani in cyberspace as a sign of their fear even of the name of the martyr and their fear of the spread and proliferation of that precious pattern and said: In today's world, the arrogant hold the key to cyberspace, and this reality must also alert the cyberspace officials of the country to act in such a way that the enemy cannot deal in cyberspace in any way and wherever he desires. Ayatollah Khamenei called Martyr Soleimani a lasting and forever living reality and added: His assassins, like Trump and the like, will be among the forgotten of history and will be lost in the dustbin of history, of course, after paying the price for their worldly crime.

The Supreme Leader of the Revolution praised the activities of the family, comrades and friends of Martyr Soleimani, and especially Commander Qaani, the Commander of the Quds Force of the Revolutionary Guards, in pursuing and advancing the blessed line of the resistance. Then said: God has promised defence and victory to those who move in the direction of His will and goals, and this promising promise will include the condition of the Iranian nation. Before the speech of the Leader of the Islamic Revolution, Ms Zeinab Soleimani, the daughter of the martyr and the head of the Martyr Soleimani Foundation, gave a report on the activities of this foundation as well as the measures taken in the People's Headquarters to commemorate the second anniversary of the resistance martyrs. Also, Commander Salami, Commander-in-Chief of the Islamic Revolutionary Guard Corps, described Martyr Soleimani as a current, effervescent and inspiring truth for the youth of the Islamic nation and added: The enemy sought to extinguish the light of the resistance with that crime, but the miracle of the blood of those honourable martyrs caused the resistance to advance and the enemy to retreat on all fronts of the conflict.