In a meeting with Venezuela's president

The Leader: Illusion of US invincibility a big mistake 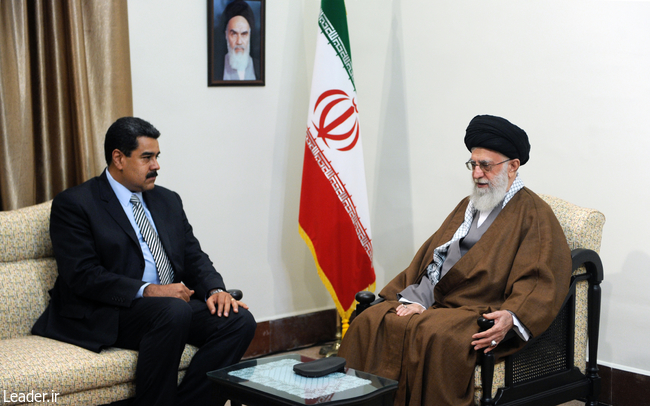 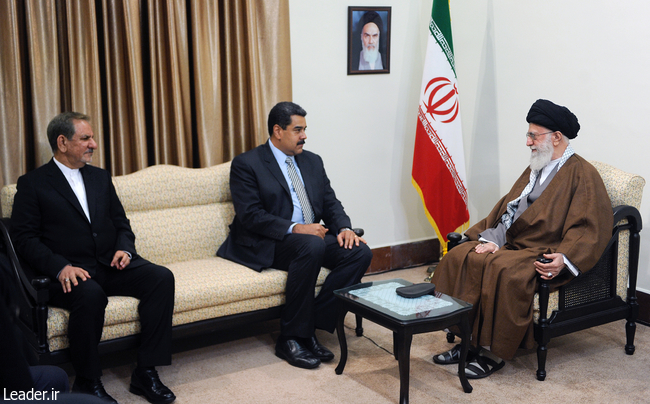 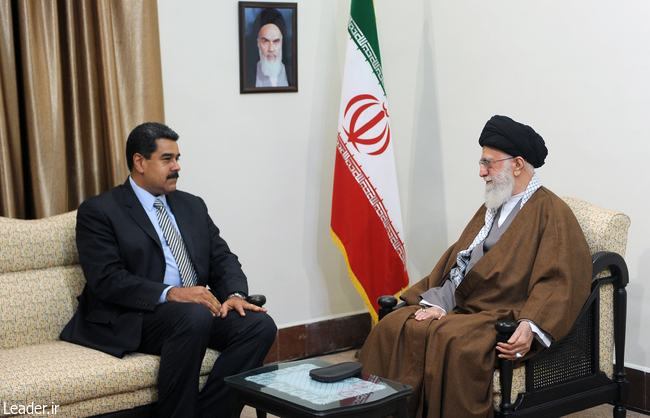 The Leader of the Islamic Revolution Ayatollah Seyyed Ali Khamenei in a meeting with visiting Venezuelan President Nicolás Maduro on Saturday referred to the failure of the United States’ plans and policies in the West Asia region and while describing reduction of global oil prices as a tool to mount pressure on countries that are independent from the US, noted, “Steadfastness and rational resistance combined with foresight in the face of pressures will certainly lead to victory.”

Referring to the use of the oil as a weapon to impose the existing problems on independent countries, Ayatollah Khamenei pointed out, “In the past, when some Islamic countries countered the Zionist regime [of Israel] by cutting off their oil [exports], Western countries clamored under the excuse of [condemning] the political use of oil, but unfortunately, the same countries along with some member states of the OPEC [Organization of the Petroleum Exporting Countries] and some countries in our region, which themselves are harmed by these policies, are currently using oil as a weapon in total coordination with America’s policies.” The Leader of the Islamic Revolution added, “These plots and hostilities can be overcome through an adoption of rational policies and increasing cooperation [among independent countries].”

Pointing to the United States’ failure in implementing its policies in the West Asia region in spite of spending “hefty amounts of money from its own pocket” and that of some regional countries, the Leader of the Islamic Revolution said, “Some people think that America is invincible while this notion is a big error and frequent mistakes made by Americans during the past 15 years have caused them to seriously run aground in the region and be hopeless now.”

Ayatollah Khamenei noted that the impact that Venezuela has on the anti-arrogance movements in the Latin America region was a sign of this country’s high capacity. Emphasizing the need to take advantage of the opportunity offered by Venezuela’s chairmanship of the Non-Aligned Movement, the Leader of the Islamic Revolution added, “Western countries are not willing for the Non-Aligned Movement to become more active, but independent countries must move in the opposite direction to their will, and in this case, the future would be certainly better than the past.”

The Leader of the Islamic Revolution also underlined the serious decision of the government of the Islamic Republic of Iran to boost cooperation with Venezuela and highlighted the important role played by officials and ministers of the two countries in following up on and accurate implementation of bilateral agreements.
During this meeting, which was attended by Iran's First Vice President Mr. Es’haq Jahangiri, Mr. Nicolás Maduro, the president of Venezuela, expressed satisfaction with his new visit to Iran and meeting with the Leader of the Islamic Revolution. He added, “The late president of Venezuela, Hugo Chavez, knew Iran and its position well and always mentioned Iran as a powerful country.”

Lauding the Iranian nation’s powerful resistance against the United States’ hostilities, Maduro added, “The Iranian nation is living in complete peace and security at a time that, unfortunately, many regional countries and Iran's neighbors are suffering from wars, divisions and weaknesses.”
The Venezuelan president then pointed to the sharp decline in oil prices during the past two years and said, “The American imperialism resorted to all kinds of interventions and hostilities against Venezuela, but our nation resisted in the face of this economic war and at present, we are gradually getting out of the economic crisis.”

Mr. Maduro then pointed to the presidential election campaigns in the United States, saying, “Regardless of which one of the two main election candidates in the United States become president, the next American government will be in decline, which will be very dangerous for the future of the world.”
The Venezuelan president also described his negotiations with officials of the Islamic Republic as successful, adding that, “We must do our best to make [bilateral] agreements bear fruit.”