The Leader in meeting with Iranian Navy commanders and officials: 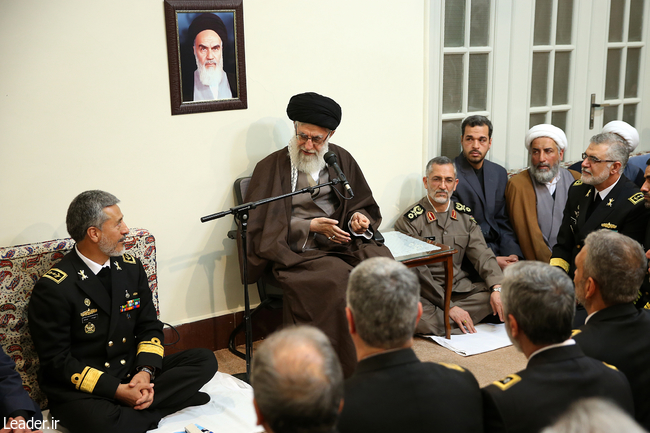 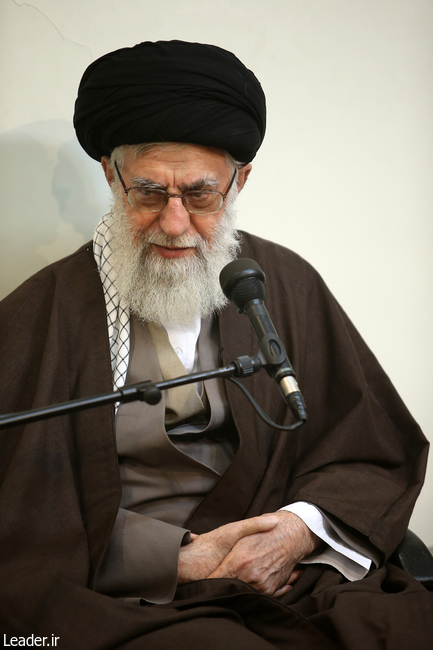 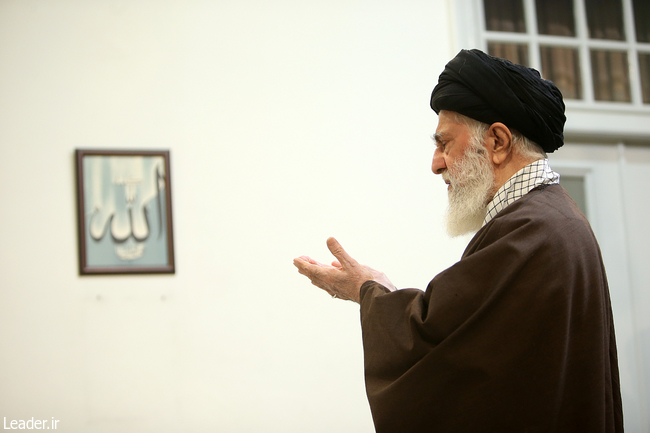 In his meeting with commanders and officials of the Iranian Navy on Sunday, Leader of the Islamic Revolution Ayatollah Seyyed Ali Khamenei praised the Iranian Navy’s advances and capabilities in various fields of manpower, command, and technical issues, describing those achievements as remarkable. Emphasizing the significance of “attaching importance to taking plans to fruition” and “having strength while avoiding hastiness in doing jobs,” the Leader pointed out, “The necessary condition for doing away with [various] shortages is having ‘strong will’ and ‘not giving in to limitations’.”
During the meeting, which was held on November 27 on the occasion of the National Navy Day, Ayatollah Khamenei highlighted the important role of the marine industry in the progress of some countries and added, “Our country enjoys long maritime borders as well as a long history in seamanship. Therefore, the power and ability of the Islamic Republic’s Naval Force must be ‘befitting and becoming of the Islamic establishment and the history of this country’.”
The Leader of the Islamic Revolution then described powerful presence of Iran's Navy in free waters as a factor helping with increased power and capability for the country and said, “[Iran's] presence in free waters must deepen.”
The Leader then highlighted the necessity of following up on various plans and projects until they reach final results and noted, “Doing jobs incompletely will bring questions and create problems and unfortunately, this is currently seen in some different sectors of the country, and among these problems is the issue of astronomical salaries [paid to some state officials]. It is one of the critical issues, the result of whose investigation has not been made clear for people and questions still linger in their minds.”
Another important point mentioned by the Leader of the Islamic Revolution was the necessity of “having strength and avoiding hastiness and thoughtlessness in doing jobs,” after which the Leader noted, “Any job must be started with strength from the very outset, because hastiness in doing jobs will cause problems, the examples of which unfortunately exist [in the country].”
Ayatollah Khamenei then referred to issues related to Iran's nuclear negotiations with the P5+1 group of countries and added, “During these negotiations there was a lot of debate about [the need to remove anti-Iran] sanctions, but now the issue of extending [those] sanctions has been brought up at US Congress and they claim that these are not [new] sanctions, but [only an] extension [of the previous ones].”
The Leader of the Islamic Revolution said, “‘Starting a sanction [from the scratch]’ is no different from ‘renewing it after its expiration’, and the latter is [also an example of imposing] sanctions and a violation of the previous commitments undertaken by the opposite side.”
The Leader said the reason behind such problems is hastiness in doing a job and added, “When we are in a hurry to do the job sooner and bring to a conclusion, we ignore details and sometimes ignoring a trivial detail will create a hole and a negative point in that job; therefore, care must be taken to do jobs with deliberation, strength, and at a suitable pace.”
Before the remarks by the Leader of the Islamic Revolution, Rear-Admiral Habibollah Sayyari, the commander of the Islamic Republic’s Navy, presented a report on the activities and measures taken by the Navy, adding, “Through its powerful and continued presence in free waters, the Iranian Army’s Naval Force has taken steps toward meeting the national interests [of Iran] and by demonstrating the Islamic Republic’s marine might and creating deterrence, has increased the depth of the Islamic establishment’s presence beyond regional waters.”
During the meeting, noon and afternoon prayers were said under the leadership of Ayatollah Khamenei.