The Leader in meeting with officials, Muslim ambassadors and ordinary people: 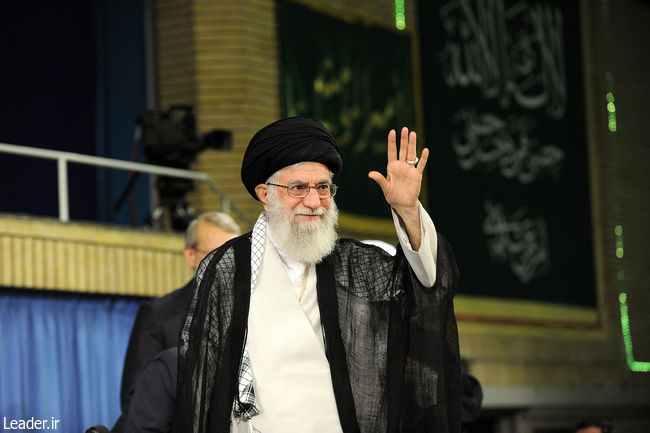 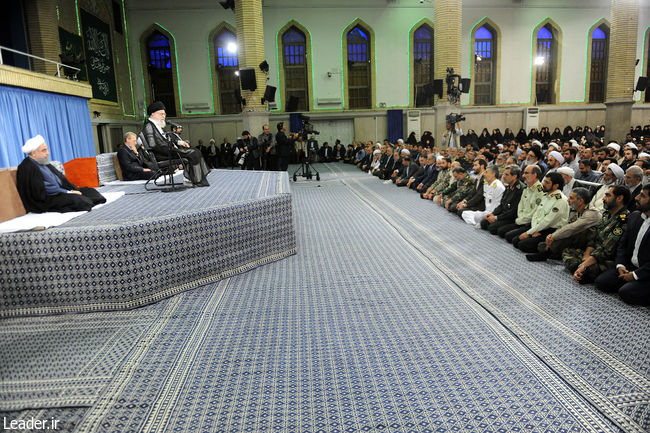 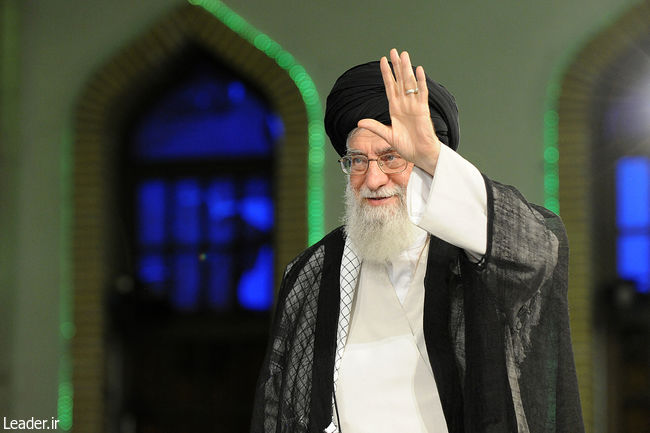 In a meeting with officials, people from all walks of life and the ambassadors of Muslim countries this morning (Monday), Leader of the Islamic Revolution Ayatollah Seyyed Ali Khamenei described “division and dispute” as the most pressing issue of the Muslim world and a major scar on its body and pointed to the role of the enemies of Islam in igniting the flames of divisions, adding, “Unity and avoiding division benefits all Muslim countries and through harmony over the issue of Palestine as the foremost problem of the Muslim world, it must be prevented from being diminished or forgotten.”

Offering congratulations over the auspicious occasion of Eid al-Fitr, Ayatollah Khamenei pointed to the exploitation of ethnic, faith, and territorial pretexts by the enemies to create division, adding, “Support by a US senator for the Sunni community against the Shia community, while they [such officials] are against Islam in principle and Muslim countries, is nothing but conspiracy and malignancy and this issue deserves serious attention and concern, but regrettably, the officials of Muslim states neglect these hostilities.”

Pointing to the existence of bloody clashes in various regions of the Muslim world such as in Yemen, Syria, Iraq and North Africa, the Leader of the Islamic Revolution reiterated, “Division and dispute are harmful to Islam and the Muslim Ummah and conversely, Muslim countries pulling closer to each other and refraining from pitting [their military] forces against each other conforms to divine wisdom and benefits all Islamic countries.”

The Leader described the Quds Day rallies and the fervent and massive presence of the Iranian people in Tehran and various other cities in solidarity with the Palestinian nation as an example of Islamic unity to be proud of, and said, “This is the very meaning of Islamic unity, in which fasting Shia people pour into the streets with such glory and greatness to voice their solidarity and sympathy for the Palestinians, who are Sunnis.”

The Leader of the Islamic Revolution pointed to the usurpation of the Islamic country of Palestine and the expulsion of its nation from their home and land, adding, “According to Islamic jurisprudence, once faced with the domination of the enemy over Islamic territory, all Muslims are duty-bound to campaign and carry out jihad in whatever possible form and, therefore, fighting against the Zionist regime is incumbent upon and mandatory for the entire Islamic world.”

Criticizing some Muslim countries for turning down this campaign, the Leader described the Iranian nation as vigilant and conscious in carrying out their duty, adding, “The Muslim world needs unity and coalition and Muslim nations are overwhelmingly in sympathy with each other and it is their governments that must fulfill their responsibilities.”

Prior to the remarks by the Leader of the Islamic Revolution, Iranian President Hassan Rouhani pointed to the fact that the period of political and election rivalries has come to an end, saying, “Now, the rivalry should be only over serving the people, implementing laws and achieving lofty national goals, and we should struggle for prosperity in production and tackling the problem of unemployment through unity and putting into practice the recommendations of the Leader of the Islamic Revolution.”

Pointing to the recent terrorist incidents in Tehran, the president said, “I offer my gratitude to the entire Iranian nation, who openly and bravely stood up against the terrorists and maintained national unity as well as those who build strategic weapons for the country and those who use these weapons against the enemies.”
Stating that the Islamic Republic revealed only a small segment of the country’s defensive might in responding to the terrorists, Mr. Rouhani added, “Armed Forces, the government and the people, all standing behind the Leader of the Islamic Revolution, expose to the world their national unity and power.”

Commending the huge presence of the people in the Quds Day rallies, Rouhani said, “The rally by the people on Quds Day provides hope to Muslims and the Palestinians and proves that right will be ultimately triumphant over wrong.”