The Leader’s response to General Soleimani’s letter on the destruction of Daesh:

You did humanity a great service 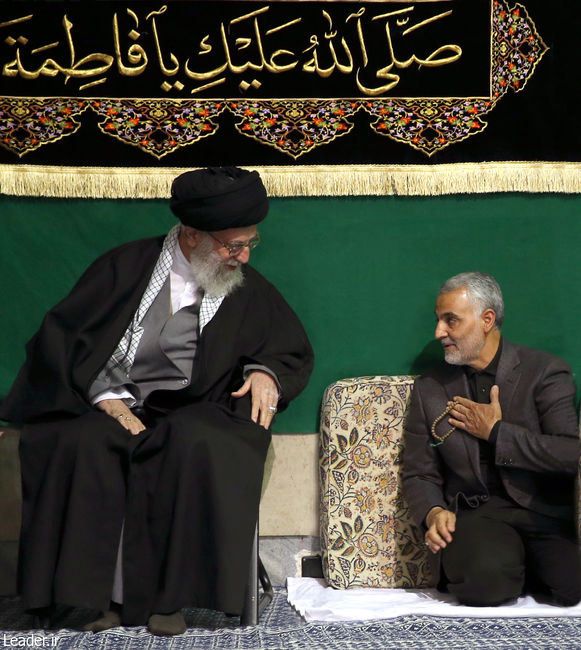 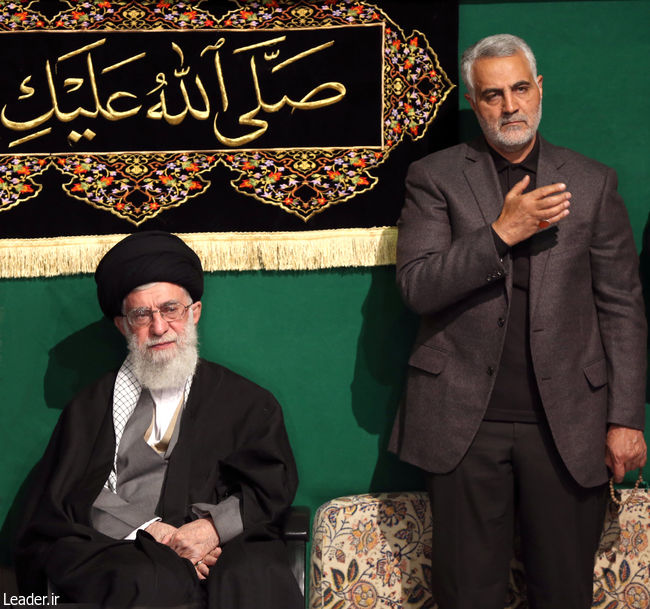 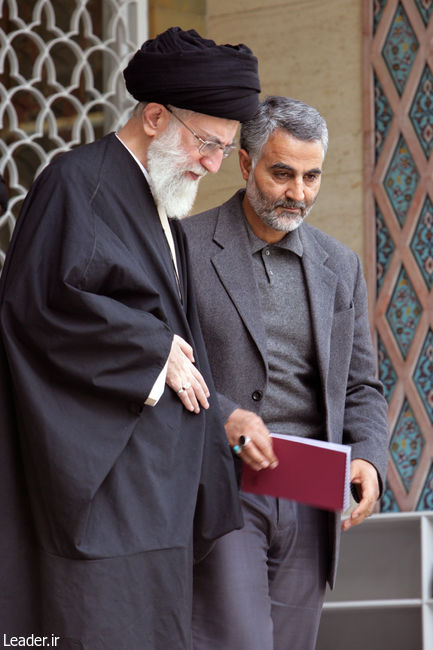 In response to a letter by Major General Qassem Soleimani, the commander of the Quds Brigades of the Islamic Revolution Guards Corps (IRGC), about the end of the dominance of the malignant Daesh entity, Leader of the Islamic Revolution Ayatollah Seyyed Ali Khamenei reiterated, “By disintegrating the cancerous and deadly tumor of Daesh, you provided a great service not only to the regional states and the world of Islam, but also to all nations and humanity.”

The full text of Ayatollah Khamenei’response to Major General Soleimani’s letter is as follows:

Dear Major General Qassem Soleimani, the illustrious general of Islam and fighter in the path of Allah, may your successes continue

I wholeheartedly thank God Almighty for bestowing his blessings upon the sacrificial endeavors of you and the great army of your comrades at various levels, and at the hands of you righteous servants [of God] in Syria and Iraq, uprooted the malignant tree that had been planted by world tyrannies. This was not only a blow to the vicious and disgraced group of Daesh, [but] was a more severe blow to the malicious policy that aimed to spark civil war in the region and destroy the anti-Zionist resistance [front] and undermine independent governments through the ruthless leaders of this misguided group.

It was a blow to the current and former US governments and their vassal regimes in this region which founded this group and provided all kinds of support to it, so that they would extend their malevolent dominance over the West Asia region and give the occupying Zionist regime dominion over it. By disintegrating this cancerous and deadly tumor, you have provided a major service not only to the regional countries and the world of Islam, but also to all of the nations and humanity. This was a divine victory and a testament to [the Quranic verse] “And thou (the Prophet Muhammad) threwest not when thou didst throw, but Allah threw” and you were awarded because of the round-the-clock efforts by you and your comrades.

I hereby sincerely congratulate you, and at the same time stress that the duplicity of the enemy must not be neglected.

Those who had hatched this evil plot with heavy investment will not sit idle [and] will try to restore it in another part of this region or in other forms. Maintaining motivation, preserving vigilance, safeguarding unity and eradicating any dangerous remnants, insight-boosting cultural activities and, in short, all-out preparedness must not be forgotten. May God Almighty protect you and all of the striving brothers from Iraq and Syria and others and I salute you and pray for you.

Peace, mercy and blessings of God be upon you all
November 21, 2017
Seyyed Ali Khamenei

In a letter this morning to the Leader of the Islamic Revolution, Major General Qassem Soleimani, the commander of the Quds Brigades of the Islamic Revolution Guards Corps declared the end of the dominance of the malignant Daesh entity and congratulated Ayatollah Khamenei and the world of Islam on this great victory. The text of general Soleimani’s letter is as follows:

In the Name of God, the Merciful, the Compassionate
Verily, We have granted thee a manifest victory (Translator’s note: The statement is a verse from the Holy Quran)
To the beloved and brave Leader of the Islamic Revolution
Ayatollah Seyyed Ali Khamenei
Greetings upon you

Six years ago, a dangerous act of sedition, similar to the ones in the era of Amir al-Mu’minin (Imam Ali) which deprived the Muslims of the opportunity for and pleasantness of truly comprehending the pure Islam of the [Prophet] Mohammad plagued the world of Islam; however, this time it was complicated and smeared with the poison of Zionism like a destructive storm.

This dangerous and toxic sedition was created by the enemies of Islam with the aim of fomenting widespread warmongering in the Muslim world and pitting Muslims against each other. The dangerous current under the name of “The Islamic State of Iraq and the Levant” through the deception of tens of thousands of the Muslims of the two countries succeeded in those early months to very effectively and decisively plunge the Islamic territories of Iraq and Syria into a dangerous crisis and seize hundreds of thousands of square kilometers of the lands of these countries along with thousands of villages, cities and provincial capitals and destroy thousands of workshops, factories and important infrastructure of these countries - including roads, bridges, refineries, oil and gas wells and pipelines and power plants and other such instances  - and bomb or burn down key cities along with their precious historic artifacts and national civilization.

Although the inflicted damage cannot be assessed; however, primary estimates put the figure at around five hundred billion dollars.

During this disaster, very painful crimes that cannot be shown occurred, including, beheading children or skinning men alive before their families, taking innocent girls and women captive and raping them, torching people alive and slaughtering hundreds of youth.

Aghast at this toxic storm, a portion of the Muslim people of these countries fell prey to the sharp daggers of these Takfiri criminals while millions of others left their homes and dwellings and wandered into other cities and countries.

In this dark sedition, thousands of mosques and holy Muslim centers were destroyed or demolished and in some cases mosques were blown up along with their prayer leaders and worshippers.

Claiming to be defending Islam, over six thousand misled youths blew themselves up in suicide attacks with explosives-laden vehicles near squares, mosques, schools or even hospitals and public sites for Muslims. As a result of these criminal deeds tens of thousands of innocent men, women and children were martyred.

According to the most senior US official, who is now the president of this country, all of these crimes were plotted and carried out by the leaders and organizations tied to the US and this approach is still being pursued and implemented by the current US officials.

What, next after the grace of glorious God and the Prophet Muhammad’s special attention, brought about the defeat of this dark and dangerous conspiracy was the prudent leadership and wise guidance of your Excellency and the senior cleric Ayatollah Sistani, which resulted in the mobilization of all resources to counter this toxic storm.

Surely, the resilience of the Iraqi and Syrian governments and the fortitude of these two countries’ armies and youths, especially the Popular Mobilization Units, and the youths of other Muslim countries with the powerful and pivotal contribution of Hezbollah led by honorable Seyyed Hassan Nasrallah played a decisive role in bringing to an end this dangerous phenomenon.

Certainly, the valuable role of the nation and government of the Islamic Republic, particularly the Islamic Republic’s honorable president, parliament, Defense Ministry and military, police and security organizations in supporting the abovementioned states and nations is commendable.

As a soldier commissioned by your Excellency in this battlefield, I declare the end of the dominion of this accursed and malignant tree with the conclusion of the liberation operations in Bukamal, Daesh’s last stronghold, and by pulling down the flag of this US-Zionist group and raising the Syrian flag and on behalf of all the commanders and unknown fighters on this scene and thousands of wounded and martyred Iranian, Iraqi, Syrian, Lebanese, Afghan and Pakistani defenders of the shrine who sacrificed their lives to protect the lives, wives and daughters of Muslims and their sanctities, I congratulate your Excellency and the great nation of Islamic Iran and the oppressed nations of Iraq and Syria and other world Muslims and extend a deep bow of gratitude to God Almighty due to this huge victory.

Victory comes only from God Almighty, the Wise.
Your son and soldier
Qassem Soleimani