The Leader in a meeting with Hajj organizers:

'US’ satanic policy on Palestine will not come to pass' 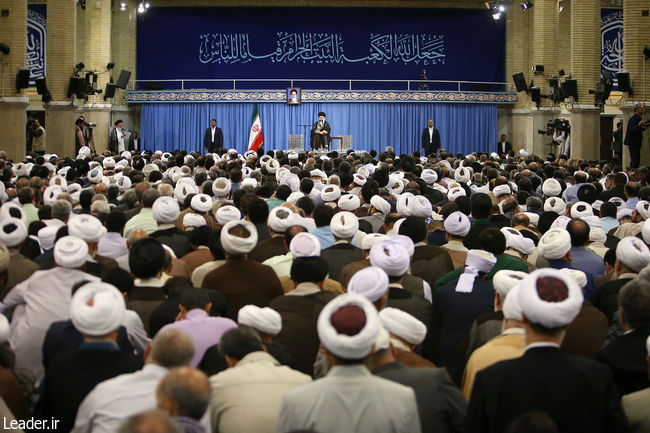 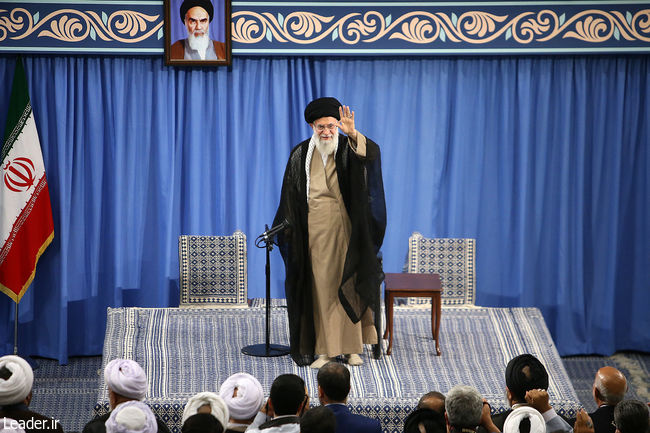 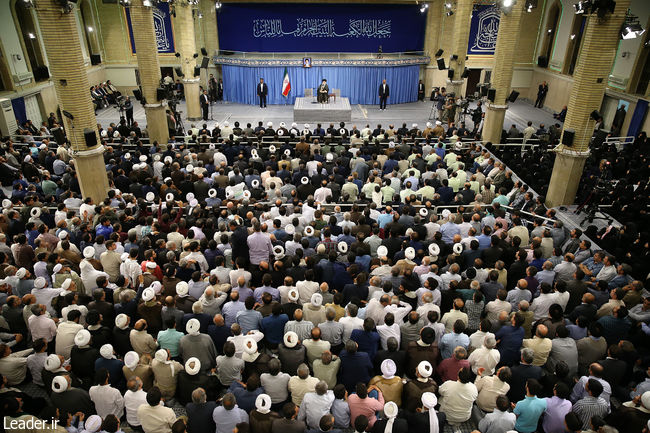 Leader of the Islamic Revolution Ayatollah Seyyed Ali Khamenei met with this year’s Hajj organizers, describing the rituals as a manifestation of the mixture of “spirituality and politics” and said its most important feature is the assembly of Muslims in a particular place and at a certain time. He added, “The real Hajj is a hajj that on the one hand is accompanied by disavowal of infidels and on the other hand brings about the grounds for the unity, harmony and unanimity of Muslims.”
Ayatollah Khamenei said the formation of the Islamic Republic Establishment and the exhibition of the capability of Islam to engage in the sphere of politics and life thwarts years of effort to instill the notion of the separation of religion from politics in people’s minds. He added, “Nowadays, once more ignorant and prejudiced individuals seek to inculcate the need for the separation of politics from life and science in the minds of the youthful generation; however, Hajj is the best opportunity and is a practical stage to display the mixture of ‘science and politics’.”
The Leader of the Islamic Revolution said the determination of a specific time and place for the gathering of Muslims in Hajj rituals shows goals that transcend mere spirituality, reiterating, “One of the important objectives of Hajj is Muslims coming together and ties and understanding among them and is in fact the very same issue of the formation of Muslim Ummah.”
He stressed that the sacred Kaaba and Masjid al-Haram and Masjid al-Nabawi belong to all Muslims and not to those who hold dominion over those lands, adding, “No one has the right to prevent the realization of the genuine concepts of Hajj and if a government or state does this, it has in fact ‘blocked the path of God’.”
The Leader of the Islamic Revolution pointed to the emergence of a new meaning of Hajj, courtesy of the guidance of the late founder of the Islamic Republic Imam Khomeini, saying, “Real Hajj must be accompanied by the disavowal of infidels and facilitate the unity and cohesion of Muslims and it should not be the case that some governments work toward the creation of rifts and division within the Muslim Ummah and tie themselves to the Hegemony.”
Ayatollah Khamenei pointed to the tragedy of Masjid al-Haram and the catastrophe of Mina in 2015, describing it as a great tyranny and stressed the need for continuously and seriously following up on the restoration of rights. He added, “This demand should never be forgotten and relevant government bodies should pursue this issue via various channels, particularly international bodies, so that a truth-finding committee is formed and rights are restored; because, in these two tragedies the provision of the pilgrims’ security and safety, which is the responsibility of the Saudi government, was not fulfilled and blood money was not paid for those killed.”
He said the most urgent need of the Muslim world today is unity and unanimity and pointed to the enemies’ focus on confronting Muslims, particularly on the issue of Palestine and the issues of Yemen. He reiterated, “Today, the Americans refer to their satanic policy on Palestine as the ‘deal of the century;’ however, they should know that by the grace of God, this deal will never materialize and, to US statesmen’s dismay, the issue of Palestine will not be consigned to oblivion and Quds will remain the capital of Palestine.”
The Leader of the Islamic Revolution stressed that the Palestinian nation will stand up to this scheme and Muslim nations will support the Palestinian people. He added, “Indeed, some Muslim governments which have no belief in Islam have become the henchmen of the American due to ignorance, foolishness and worldly gains; however, with divine help, the Muslim Ummah and Palestinian nation will prevail over their enemies and will see the day that the bogus Zionist regime is uprooted from Palestinian lands.”
Prior to the remarks of Ayatollah Khamenei, Hojjatoleslam Seyyed Ali Qazi-Askar, the representative of the Leader of the Islamic Revolution for Hajj and pilgrimage affairs and the head of Iranian pilgrimage mission, said, “The motto of this year’s Hajj is ‘Hajj, spiritual and moral transformation, religious lifestyle, Islamic honor and dignity.”
Qazi-Askar added, “We have asked the pilgrims to refrain from wandering in the shops and choose their souvenirs out of domestic products so that they would also reap the rewards of contributing to domestic production and the employment of youths.”
The head of Iran’s Hajj and Pilgrimage Organization, Hamid Mohammadi, also delivered a report on the measures taken, saying, “The executive process of this year’s Hajj was launched with the approval of the Supreme National Security Council and an effort was made to meet the demands and expectations of the people and Establishment regarding the security, dignity and honor of the pilgrims.”
Mohammadi stressed that the activities of the organizers of Hajj revolves around the three principles of relentless effort and endeavor, economicality and innovation. He said, “In this year’s Hajj, around 86,000 pilgrims have been organized into 586 convoys.”