Ayatollah Khamenei in meeting with participants in Asian Para Games: 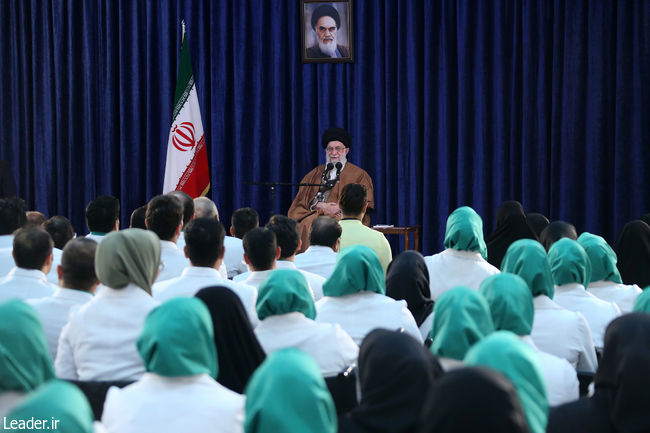 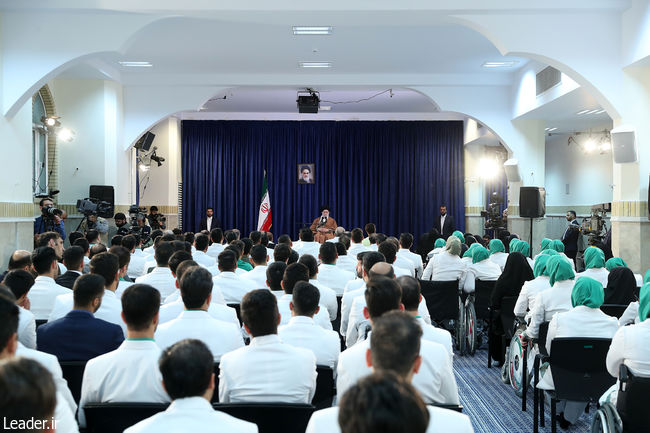 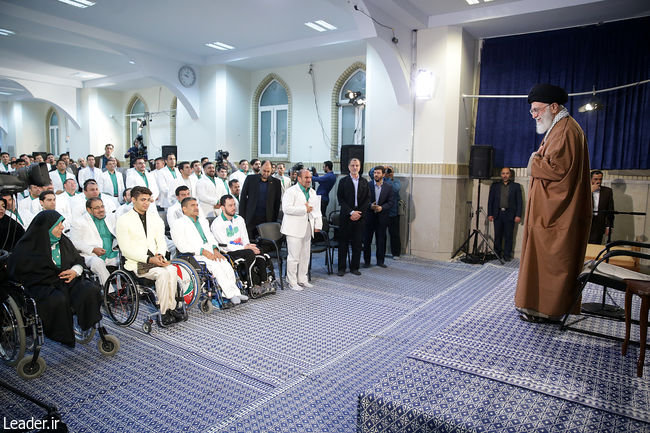 Medal winners and champions of the Islamic Republic of Iran's sports caravan who participated in Asian Para Games held in Jakarta, Indonesia met with Ayatollah Khamenei-- the Leader of the Islamic Revolution-- on November 14, 2018.

At this meeting Ayatollah Khamenei praised the differently-abled athletes representing Iran at the Asian Para Games 2018 and described them stimulation of mankind’s hidden potentials. He asserted: That disabled war veterans and differently-abled athletes play sports represents stimulating hidden potentials in mankind. All humans have some talents which are sometimes ignored. You have won medals, and have become champions; so you are manifestations of activating capacities.

Ayatollah Khamenei stressed that everyone regardless of their age should follow the disabled athletes for they are epitomes of determination and willpower; he held: All of us-- regardless of age, but particularly the youth-- should follow in your footstep. You shined at this field despite physical challenges. That is why I say achievements by you the disabled war veterans and differently-abled athletes are worth twice as the championship of those without physical problems. Your championship represents firm, manifold determination.

The Leader of the Islamic Revolution hailed the athletes from among disabled war veterans and differently-abled individuals in their power to inspire the public and added: You are doubly influential in inspiring the people to do sports. The motivation you arouse in them is two-fold.
Ayatollah Khamenei appreciated the display of cultural power by a female athlete who bore the flag of Iran’s sports caravan to the Asian Para Games while dressing in Iranian chador and added: Your self confidence in fortifying your cultural heritage was extremely important. One example of it was that the Iranian flag was held by a lady in chador. This signifies that you are uniquely standing against the world’s increased lewdness and indecency. Indeed, by doing so, you fortified your religion, your national values and notions and your national clothing—that is chador—in an international arena. This requires courage and bravery; many of the people are not strong enough to resist in face of non-stop demands thrusted upon the world by the front of Paganism. I am cordially grateful to you, ladies; this was a display of cultural power.

The Supreme Leader went on to uphold athletes’ manifestations of their gratitude towards God for their achievements and held: The problem with rebellious and perverse humans is that they regard their belongings and achievements as coming from themselves. They forget the divine compassion and attention. After victory, you thank God and sometimes you prostrate before him. This signifies that you consider your victory coming from God. By thanking Him, you indicate you are not ignorant. This is an important level of thankfulness, and this will bring about even more success and achievements for more.

Ayatollah Khamenei mentioned that championship sports are a great source of motivation for the general public to take part in physical activities by stating that, “Championship sport resemble a summit whose skirts are the general sport activities [by the public]. Everyone looks up to the summit and is motivated by it.”