In a meeting with ambassadors of Muslim countries: 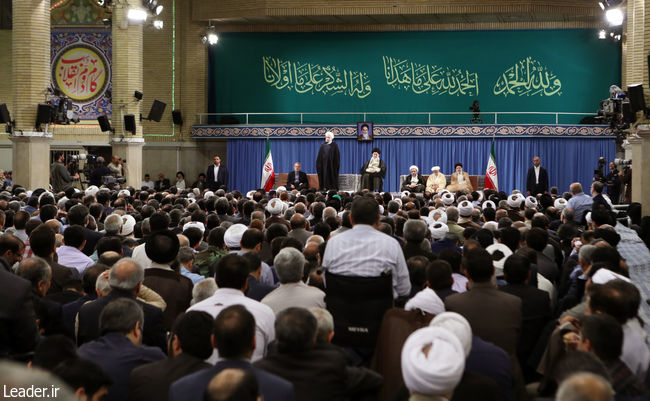 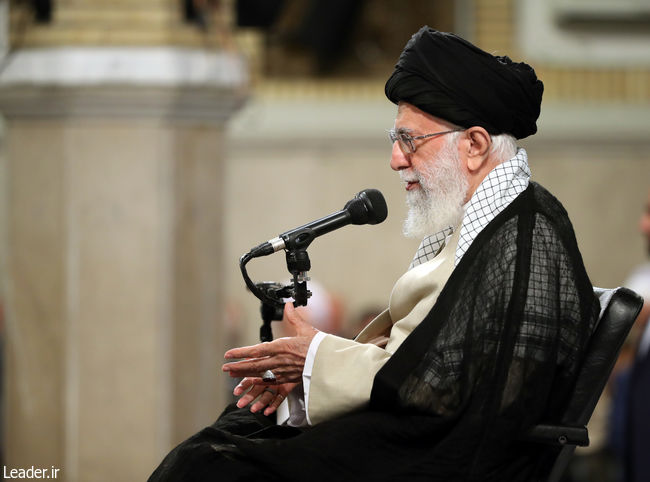 On the auspicious ‘Eid al-Fitr, ambassadors of Muslim countries, government officials and various groups of people met with the Leader of the Islamic Revolution— Ayatollah Khamenei l— this morning, June 5, 2019.

In this meeting, Ayatollah Khamenei criticized Muslim states that set against one another and stressed: Unfortunately, today in our region, Muslims are lining up against each other. There are remiss rulers of a Muslim country that side with the Zionists.
The Supreme Leader congratulated Muslims across the world on Eid al-Fitr and said: I would like to congratulate the great Iranian nation, who truly deserve appreciations, and the Islamic Ummah on the occasion of auspicious Eid Fitr.
His Eminence you invited Muslims to revive the notion of Muslim Ummah, adding that: We insist that the concept of the Islamic Ummah be revived and promoted in the collective minds of all Muslims— particularly of the Muslim officials.
The Leader of the Islamic Revolution advised Muslims to seriously attend to unity and said: Because the enemies of Islam have intended to make Muslims forget the concept of Islamic Ummah; they make us forget that an approximately two billion population in dozens of Islamic countries are considered as a single unity.
Unfortunately, they have succeeded.
His Eminence went on to say: If you look at our region today, you will see that instead of lining up agains the Front of Arrogance, Muslims are opposing one another.
Ayatollah Khamenei urged the World of Islam to resolve discord and asserted: A Muslim country is found with Muslim people but remiss rulers, who side with the usurping Zionist Regim, instead of opposing it, and fight against another Muslim country. The Muslim world should resolve this.
Slamming the summit to be held in Bahrain together with arrogant powers, the Supreme Leader added: They organize a summit in Bahrain by order of the U.S. on destroying Palestine. The Saudis should repent, the door to repent is open.
Tapping on the issue of Palestinian cause, Imam Khamenei urged Muslims to act against the Zionist regime and asserted: The usurping enemy at the heart of Muslim countries— that is Palestine— is very active in committing ruthless crimes.
As a result, all Muslims should be sensitive and prevent it from continuing crimes. Instead, some from the Muslim world compromize with it, and start to fight and arouse conflicts against other Muslim brothers.
The leader of the Islamic Revolution referred to a Quranic instruction that invites Muslims to be united against their enemies, adding that: We advise the countries that forget what the Quran wants them, thus they are severe to believers; and kind to disbelievers.
Regarding Palestine as the top priority of the Islamic World, Imam Khamenei reiterated: Today, Palestine is the first cause for the Muslim world. Meanwhile, they organize an assembly in Bahrain by order of the U.S. for destroying Palestine.
The rulers of Bahrain should know that they are harming themselves, weakening their bases, they should not be deceived by the Saudis.
His Eminence added: Even the Saudis who are spending money, will see that it will turn out to be detrimental for them and for their wants. Unfortunately, they do not understand.
The Supreme Leader slammed the call by some Arab leaders in the past to throw Jews in the ocean, adding that Iran’s proposal for the Palestinian issue is different, he asserted: We are not like some old Arab leaders who claimed they would throw the Jews into the sea. We believe that the resistance by the Palestinian nation, and their political, military, and cultural fight must continue until the usurpers of Palestine surrender to the will of the Palestinian nation.
Ayatollah Khamenei proposed: Our proposal is that a referendum should be organized for all Palestinians including Muslims, Christians, and Jews, and those who were forcefully expelled from their homeland of Palestine, and everyone should accept the result. Until then, the resistance must persist. By the will and power of God, the land of Palestine will be returned to its people.

Finally Ayatollah Khamenei reassured Muslims that resistance will ultimately bring about victory and asserted: The problems of the Muslim world will be solved by solidarity and cooperation among the Muslims. We, in the Islamic Republic, have accepted the costs of defending Palestine. We said we would defend  them and the world of Arrogance strike a blow against us; but we resisted, and we will continue to resist. We all know that the final victory is for the Palestinian nation.