In a meeting with thousands of nurses:

The Leader: US taking revenge for Daesh from Hashd al-Sha'abi 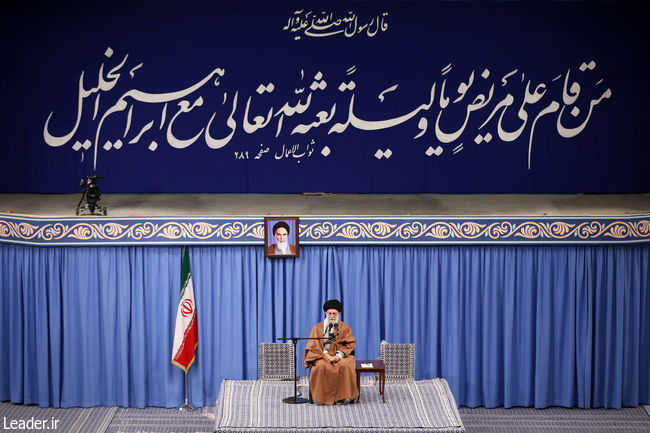 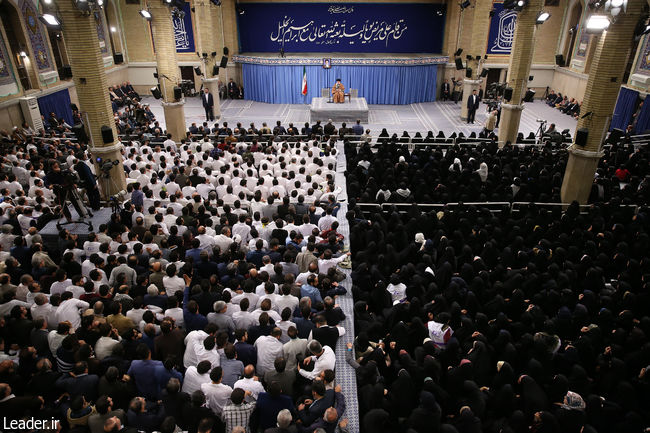 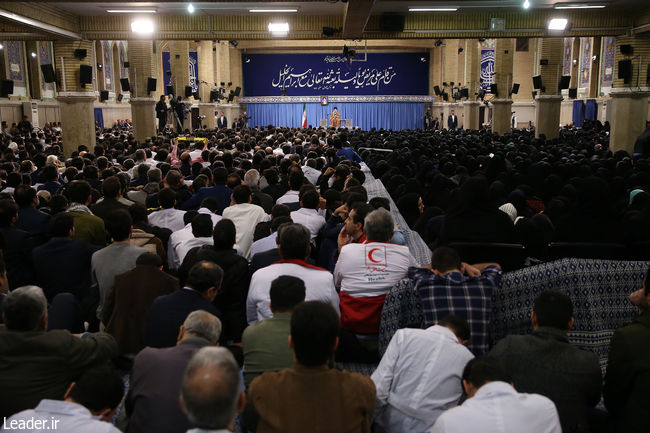 On the occasion of the auspicious birth of Lady Zeinab al-Kubra (p.b.u.h.), thousands of nurses from across the country met with Imam Khamenei, the Leader of the Islamic revolution, on January 1st, in the Husayniyah of Imam Khomeini.
The following is an excerpt of statements his eminence made at this meeting:

"I give my congratulations on this occasion of National Nurses’ Day and the birth anniversary of Lady Zeinab. Those who chose the birth anniversary of Lady Zeinab for Nursing Day did an auspicious and wise job. Lady Zainab is a prominent lady in the history of humanity, not just in the history of Islam. This great lady is a role model for nurses.
Some jobs deal with the beauties in life, but your job deals with sufferings and pain. Honouring nurses equals appreciation of religious values and rare human virtues, from compassion and sympathy to patience in the face of pain and irritability. Our society today needs empathy, commitment, patience and endurance.
Consider what they [the Americans] do in Iraq and Syria. They are taking revenge for ISIS from Hashd al-Sha'abi because Hashd al-Sha'abi crippled and destroyed ISIS—which they had created and developed. The Iranian government and nation and I strongly condemn the American’s malice.
Now, the remarkable thing is that when such events happen for the Americans—you see the extent of anti-Americanism in Baghdad and all over Iraq—again he [the American president] tweeted that they blame Iran for it and will respond to Iran. First of all, you have no right to do so (addressing the Americans). Secondly, be logical, but you are not. The people of this region hate the U.S. government. You, Americans, killed the people and committed crimes in Iraq and Afghanistan. The Iraqis, Syrians, and Afghanis hate the Americans, and that hatred will be manifested somewhere. This hatred is the result of America's political and security movement in the region.
The Islamic Republic will act unequivocally if it decides to challenge and fight a country. We are committed to the interests and welfare of our country and our nation. We are strongly committed to the dignity, progress and glory of the Iranian people. We will unhesitatingly confront and strike whoever threatens them.
It is essential to safeguard the achievements a nation gains by surmounting big challenges. Countries and nations are at times faced with challenges and sometimes they glowingly overcome the problems. Since the victory of the Revolution, there have been many cases of such bright successes for our nation. One example was the nation’s presence in the streets on December 30, 2009, which was able to nullify an important and deep-seated sedition. It is extremely important to preserve this.
In November, people had demands. The enemy, who had prepared some agents, seized the opportunity and began the destruction. The people’s insight was involved here that just as soon as they saw the enemy's actions, they withdrew and the seditionists remained alone. The agents of sedition tried to hide themselves among the people. The insight and astuteness of the people thwarted the enemy.
In my opinion, those who abuse the demands of the people are usually linked to the enemy’s intelligence services. There are those who cover their faces and attack gas and wheat warehouses to set them on fire and try to destroy the infrastructure in the city - whether it is the people’s or the government’s property. Some may do such things in the excitement, but the main leaders are affiliated with foreign intelligence services.
One of the country's top officials recently told me a foreign politician had told him that he was in Washington on Saturday (at the beginning of the November riots) and that the foolish US leaders were happy and said, “Iran is done.” He had answered, “Iran is strong and stands up to such cases.” They had said, “No, this case is different.” He said that after a few days when the events were over, the Americans were very upset that it didn’t work.
We thank God that our dear people are brave, insightful and ready to work. We will never lead the country to war, but if others want to impose something on us, we will stand up to them powerfully. And, we believe that God is with us and that victory belongs to us. We believe that in the future the country will be much better than it is today, in the same way, that today it is much better than it was in the past."