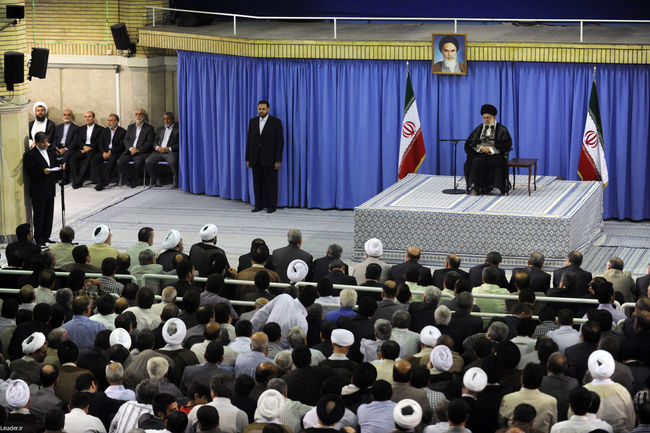 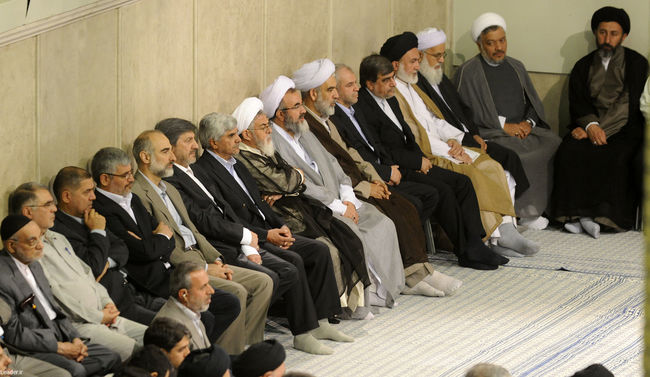 The following is the full text of the speech delivered on September 11, 2013 by Ayatollah Khamenei, the Supreme Leader of the Islamic Revolution, in a meeting with officials in charge of hajj affairs.

In the Name of Allah, the Beneficent, the Merciful‌

First of all, I would like to welcome all the dear brothers and sisters and the glorious officials who render many services in one of the outstanding arenas of the Islamic community - that is to say, the arena of hajj and visiting the House of God and the enlightened city of Madina. I hope that you will benefit from this great achievement in the hereafter. I hope that your actions and efforts in this auspicious arena will be so sincere that your performance sheet in the hereafter shines, like the sun, with the light of purity and sincerity. I express my gratitude to the honorable gentlemen for the efforts that they have made in the arena of hajj. The things that they have done - whether in cultural, spiritual, moral and educational areas or in practical and organizational areas - should really be appreciated.

What is important is that we should know hajj is one of the strong points of the holy religion of Islam. Although there are not a few strong points in Islamic sharia, hajj plays an outstanding role because of the characteristics which it enjoys and which we are more or less familiar with. In fact, we can say that hajj is a source of power for the Islamic community and the Islamic Ummah. The day when we Muslims from different countries and with different denominations manage to achieve intellectual growth so much so that we can form the Islamic Ummah in the real sense of the word - unfortunately, we Muslims have not managed to achieve this moral, political and intellectual growth until today - and the day when we Muslims from eastern parts to western parts of the world of Islam manage to form one single ummah although we may have different governments, we understand how hajj can be a source of power, strength, transcendence and dignity for this Islamic Ummah.

Today, the Islamic Republic should adopt such an outlook towards hajj. It should regard hajj as a means of power. What kind of power? By power, do we mean materialistic, political, military power or soft power such as cultural or linguistic power? The answer is no. The power of hajj is far beyond this. As well as showing the political and cultural power of the Islamic government, hajj provides a source of spiritual power. That is to say, it builds human beings from the inside, prepares them to overcome difficult obstacles and opens their eyes to realities which cannot be seen and felt without being present in the arena of hajj. By performing hajj rituals, one can understand a number of spiritual and educational realities of Islam. Hajj plays such a role.

One of the requirements of hajj is that hajj pilgrims should behave in a brotherly - in the real sense of the word - way towards one another in the arena of hajj and this great Islamic obligation. They should not look at one another as outsiders and enemies. They should see themselves as people who are moving towards one goal, who pursue one thing, who revolve around one pivot.

Allah the Exalted says, "Let there be no obscenity, no wickedness and no quarreling in the Hajj." [The Holy Quran, 2: 197] The meaning of "no quarreling" is not that we should not quarrel with the enemy. On the contrary, hajj is the manifestation of quarreling with the enemy. Some narrow-minded and pessimistic people say, "There should be ‘no quarreling' during hajj pilgrimage. Why do you hold a detestation ceremony during hajj pilgrimage?" The enmity which is reflected in this ceremony means enmity towards polytheism and atheism. This is one of the most fundamental principles of Islamic life. The kind of enmity which should not exist in hajj pilgrimage is enmity between brothers and believers and enmity between people who believe in monotheism. This enmity should not exist. Not only should we Muslims express in words that we have no enmity towards one another, but also we should feel this from the bottom of our hearts.

This is the exact opposite of what the enemies of Islam are trying to do in the Islamic community. You should pay attention to this. The existence of differences between Islamic denominations and between Shia and Sunni Muslims will not create any problem as long as these differences are confined to ideological differences. One person may believe in something and another person may believe in something else. Problems arise when these ideological differences lead to behavioral differences, confrontation, hostility and enmity. The enemies of the world of Islam are after creating such a situation and hatching such a plot.

They have properly understood that the Zionist regime can breathe easily if Islamic denominations in the world of Islam start confronting and fighting with one another. They have understood this truth perfectly and properly. On the one hand, they form groups which engage in takfirism - not only do these groups anathematize and curse Shia Muslims, but they also anathematize Sunni denominations - and on the other hand, they hire a number of mercenaries to add fuel to the fire of discord. You know and have heard about this plot. They provide these groups and mercenaries with different means of mass communication. Where do they do this? They do this in America and London. The kind of Shia Islam which is promoted from London and America is useless for Shia Muslims.

Shia leaders - particularly the leaders who emerged after the victory of the Islamic Revolution - our Imam and other leaders placed great emphasis on preserving the unity of the Islamic Ummah and behaving in a brotherly way towards Muslims. This is while a number of people - who interfere in the affairs of Muslims for no reason - are after fueling the fire of discord. This is the thing which the enemy wants. This is the thing which the enemies of Islam - who are neither Shia nor Sunni - like to pursue. We should understand this condition properly and we should pay attention to it.

Another important point is that Muslims should share and exchange their original Islamic cultures and their Islamic experiences with one another. This is another strong point of hajj and another source of power for it. We may have heard different things about such and such an Islamic country. But, hearing is different from sitting and talking directly to an individual from an Islamic country. This individual can also compare what he has heard about our dear Islamic Iran with what he sees in you and hears from you. This way, he can discover the truth about Iran.

There are an enormous number of propaganda campaigns against the Islamic Republic. There are a large and surprising number of media networks who propagandize against the Islamic Republic with different methods. When a young individual from such and such an African, Asian, Arab or non-Arab country goes on the Internet, watches such and such an international channel or reads such and such an international newspaper, how can he or she understand that what such media networks say is false? Your presence in hajj and in this international arena gives you the opportunity to reveal the truth not only in words but also in action. It helps you to speak the truth about Shia Islam, the Islamic Revolution and the events which are happening today.

Another important and crucial point about hajj is the thing which I referred to earlier: strengthening spirituality in our hearts and souls. My dear ones, we can put up a resistance in the arenas of jihad for the sake of God only if our hearts are filled with faith in God and reliance on Allah the Exalted. It is not possible to move forward without spirituality. It is not possible to take difficult paths without a strong faith. Without reliance on Allah the Exalted, it is not possible to ignore the superficial power of powerful countries and see the real power. Reliance on God, faith and belief in God's promises are necessary. These things can be achieved in hajj. When people go on hajj pilgrimage they "Witness the benefits (provided) for them." [The Holy Quran, 22: 28] These benefits are not only material benefits. There are otherworldly, spiritual and psychological benefits as well as material benefits in hajj pilgrimage. This is the significance of hajj.

Well, today you can see that besides creating intellectual, psychological and ideological discord among Muslims throughout the world of Islam, the enemies fuel the fire of war as well. See how they fuel the fire of war in our neighboring countries with the pretext of Shia and Sunni differences. They do this in different ways in our neighboring countries such as Pakistan, Iraq, Syria and Bahrain. Even when the problem is not about Shia and Sunni, they say that it has occurred because of Shia and Sunni differences. I have given many examples in this regard. The enemies are prepared to set the region on fire for their own political interests. Superpowers are like this. They are not afraid that an explosion may take place in such and such a neighborhood of an Iraqi city and they are not afraid that 50 people may be killed in this explosion. They are not afraid that certain events may happen in Syria, Egypt or other countries which may turn them into a ruin. Superpowers - such as America and countries like America - do such things for their own illegitimate interests. We hope that the Americans are serious about their new outlook on Syria. We hope that it is not another political game.

The Islamic Republic takes a look at all these issues with open eyes and with its full attention. What we have understood is that as a nation with a total population of 70, 80 million people and with a sensitive geographical location in the world, we should strengthen our position by adopting the right outlook and by benefiting from our Islamic power. We should let the entire humanity see our lofty and human goals which have originated from Islam and we should invite all human beings to cherish the gift which Islam has offered to human beings. This is our responsibility. I have repeatedly said that strengthening the country from the inside is possible primarily with firm faith, unity of the people, appropriate actions by the officials of the country, cooperation between the people and officials and reliance on Allah the Exalted. That is to say, we should benefit from rationality, spirituality, reliance on God and diligence. Undoubtedly, this will influence the conditions of the region as it has influenced the region so far.

I hope that what Islam wants for the Islamic Republic, people throughout the world, Muslims and non-Muslims will be achieved with your presence in different arenas - including your presence in the arena of hajj which manifests your rationality and your clear outlook. I hope that your presence in such arenas will bring about communal happiness.

Greetings be upon you and Allah's mercy and blessings