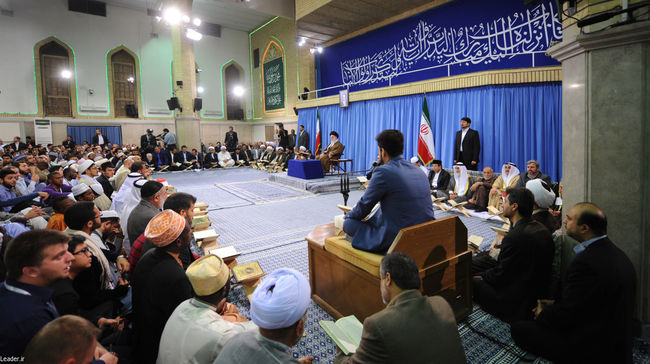 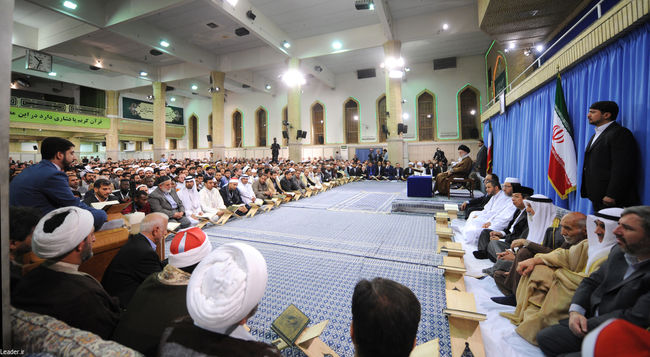 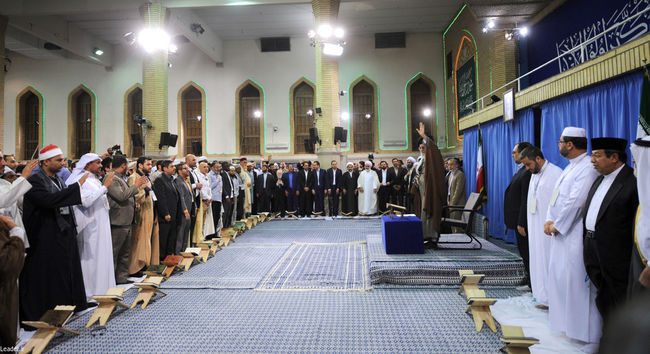 Ayatollah Seyyed Ali Khamenei, the Supreme Leader of the Islamic Revolution, received the participants in the 32nd International Quran Competitions in Tehran on Saturday, which coincided with the birthday of Hazrat Abolfazl Abbas (PBUH). The participants, who included instructors, reciters and memorizers of the Holy Quran, were received by Ayatollah Khamenei at Imam Khomeini Hosseiniyeh (religious center).
In this meeting, Ayatollah Khamenei underscored the need for the presence of the Quran in all aspects of individual and social life of Muslims, noting that reaching this lofty goal requires two elements of “insight” and “determination.”
“The remedy to the current problems of the Muslim world is submission to the instructions of the Quran and not submitting to the impositions of modern ignorance and resistance against bullying of this ignorance,” the Supreme Leader said.
He noted that reciting and memorizing the Quran are preludes to being inspired by Quranic ethics and shaping a society based on Quranic instructions, adding: “Today, unfortunately, the Muslim world is suffering from weakness and poverty and differences and civil wars stemming from the pressures of ignorant regimes, which the only way to resist these imposed pressures is submission to the Quran and having serious determination for moving towards its lofty goals.”
The Leader said: “If one step is taken towards Quranic goals, God will bestow more power and this is the issue that the Iranian nation has experienced, and by resisting against bullying, has achieved higher capabilities and hope.”
Ayatollah Khamenei said benefiting from the experience of the Iranian nation with regard to resistance against powers is the solution to the problems of the Muslim world, adding: “Today, fomenting discord and division among the Muslim Ummah is one of the main plans of the enemies. Therefore, everybody should be cautious not to cry out [in favor of] division and become the mouthpiece of the enemies of Islam and the Quran.”
Noting that any person serving to foment discord among Muslims is the mouthpiece of the enemy, the Leader said: “Causing differences under such titles as Shia and Sunni, Arab and non-Arab, and ethnicities and nationalities and nationalistic prejudices is on the agenda of the ill-wishers of the Muslim Ummah, which must be resisted with “insight” and “determination.”
The Supreme Leader said insight and correct differentiation between “friend” and “foe” is very necessary, adding: “When determination and resolve are combined with insight, it would be easy to tread the path and resist pressures and impositions and conspiracies, and that is the divine assistance.”
Ayatollah Khamenei said increasing familiarity with the Quran on a daily basis in the society is promising and hope-inspiring. He stressed the necessity for serious attention to the Quran by officials, adding: “Youths and intellectuals must become more familiar with the Quran because enriching the mind with Quranic knowledge would affect the words and deeds and large-scale decision-makings.”
Ayatollah Khamenei noted that familiarity with the Quran would guarantee a bright and happy future, adding: “Today, movement toward Islam and the Quran has fortunately started among Islamic societies, one of whose blessings is Islamic Awakening.”
The Supreme Leader said: “Islamic Awakening is a reality which cannot be done away with and its effects will expand day by day.”
Ayatollah Khamenei noted that scholars, intellectuals, writers, students, researchers, and reciters and memorizers of the Quran shoulder a heavier responsibility with regard to the increasing expansion of Islamic Awakening, and emphasized: “People must be inspired with hope regarding the path promised by the Quran.”
In conclusion, the Leader expressed hope that Muslim governments would get familiar with the Quran in practice and carry out its commands, instead of merely speaking about it.
Prior to the Supreme Leader’s remarks, Hojjatoleslam Mohammadi, representative of the Supreme Leader and head of the Endowment and Charity Affairs Organization, congratulated the arrival of festive occasions in the lunar month of Sha’ban, and presented a report on the process of holding the 32nd International Quran Competitions.
He said the Quran competitions this year were held better than last year’s in terms of quantity and quality, adding, “Indiscriminate attention to all participants in the competitions and intimacy and sincerity among them, the participation of junior reciters of the Quran, holding ceremonies for more familiarity with the Quran in provinces attended by foreign reciters, praising women active in various Quranic fields, and enthusiastic presence of people and officials in the competitions were among the most important features and programs of this round of competitions.”