Iran's leader in a meeting with the Iraqi prime minister: 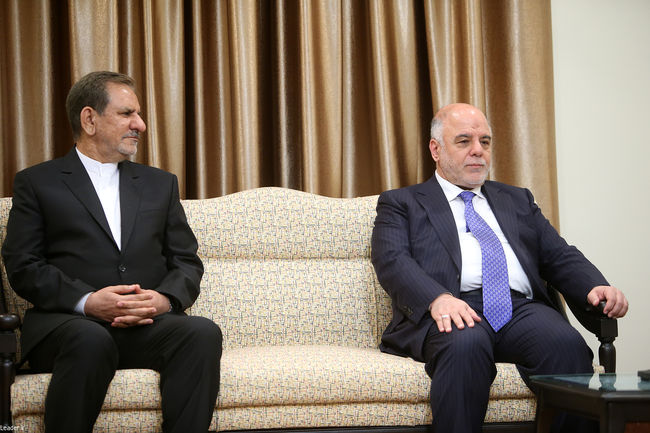 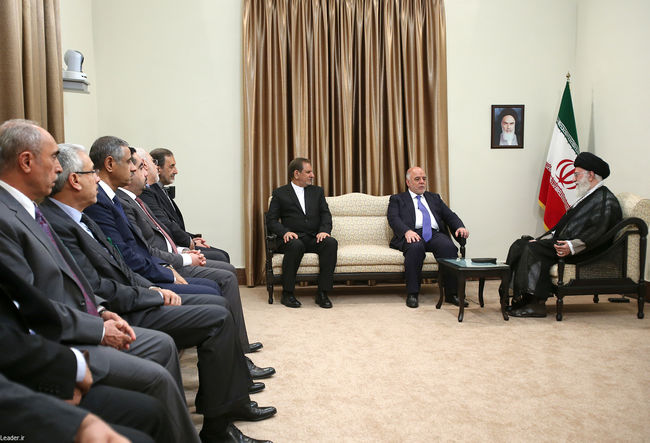 Ayatollah Seyyed Ali Khamenei, Leader of the Islamic Revolution, in a meeting on Wednesday with visiting Iraqi Prime Minister Haidar al-Abadi and his accompanying delegation in Tehran, underscored the absolute necessity of remaining vigilant in order to safeguard Iraq’s political and national unity.
Referring to the determination, perseverance and courage of Iraqi youth in the fight against terrorists, Ayatollah Khamenei said: “The great potential of popular volunteer forces will be very effective and influential for the future and progress of Iraq in different arenas.”
The Leader noted that the resistance of the Iraqi nation and government against terrorists would guarantee the security of countries in the Middle East region, saying: “One of the outstanding features of Iraqi pepole, which further came to light during the battle with terrorists, was the courage and determination and strength of popular volunteer forces and zealous nomads in confronting the enemy.”
Ayatollah Khamenei said the existence of terrorists in Iraq is a short-lived event, noting: “Popular volunteer forces are a great asset and a reliable source in different arenas, [which goes] beyond the battlefield.”
Ayatollah Khamenei said: “The experiences of Iraqi people with the British colonialism in the past and with the Americans’ expansionism at present indicate that the ill-wishers of the Iraqi nation will never favor the emergence of great popular forces on the scene. Therefore, this popular asset must be protected.”
One of the objectives pursued by security and intelligence services of Western countries in Iraq is to destroy the pillars of political and national unity in the country, said the Leader, adding: “This conspiracy and efforts to sow discord should be tackled cautiously and attentively, and the Shia-Sunni as well as Kurd-Arab unity in Iraq should not be allowed to be harmed.”
Ayatollah Khamenei said: “The Islamic Republic of Iran supports the unity of combatant and revolutionary groups in Iraq and it is necessary that Iraqi people and officials vigilantly watch out for divisive attempts by foreigners.”
Noting that the Islamic Republic of Iran views the security and progress of Iraq as its own security and progress, Ayatollah Khamenei said: “The Americans are seeking to plunder the Iraqi wealth on the one hand, as they do in some Arab countries in the region, and on the other, to impose their own demands like in the past. But such an objective should not be allowed to be realized.”
Reiterating Iran’s all-out support for Iraq’s legal government, Ayatollah Khamenei said: “As before, the Islamic Republic of Iran will continue to support the Iraqi government and people.”
Elsewhere in his speech, the Leader said the hospitality and rapturous welcome extended to pilgrims of Iraqi holy shrines on Arabeen Day (40th day after the anniversary of the martyrdom of Imam Hussein) was another outstanding feature of the Iraqi people. He added: “This spiritual devotion and behavior in today’s material world is very important and considerable and [shows that] the depth of this virtue [enshrined in] Iraqi people has not yet been realized well.”
In this meeting which was also attended by Iran’s First Vice-President Es’haq Jahangri, the Iraqi prime minister expressed great contentment with this meeting and said Iran’s continued support for Iraq and the Iranian government’s sincere cooperation [with the Iraqi government] is indicative of the depth of relations between the two countries. Abadi said "the enemies of Iraq have concentrated all their power on creating tribal and religious divisions, but the people and government of Iraq are determined to confront this conspiracy and safeguard national unity.”
Noting that Takfiri terrorists operating in Iraq and Syria make no difference between Shias and Sunnis, he said that the perseverance of the Iraqi government and nation has strongly blocked the expansion of ISIL in the regional countries, but serious confrontation with these terrorists requires the unity of the regional countries.
The Iraqi prime minister also expressed gratitude to Iran for backing and assisting the Iraqi government and nation in confronting terrorists.