In a meeting with Iranian Hajj officials

Ayatollah Khamenei: Hajj Disaster Must Not Be Forgotten 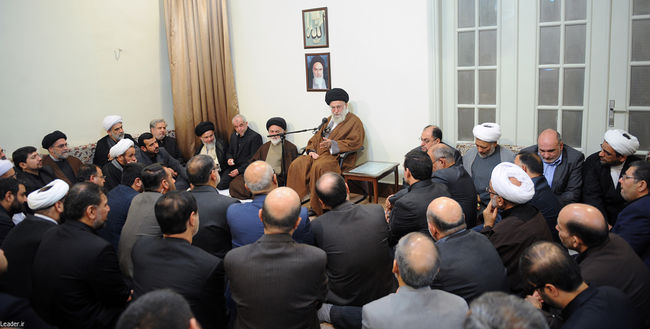 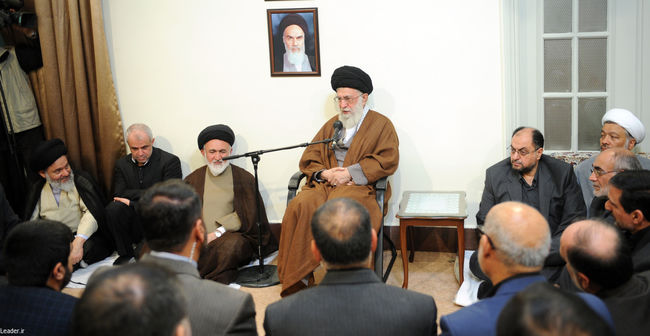 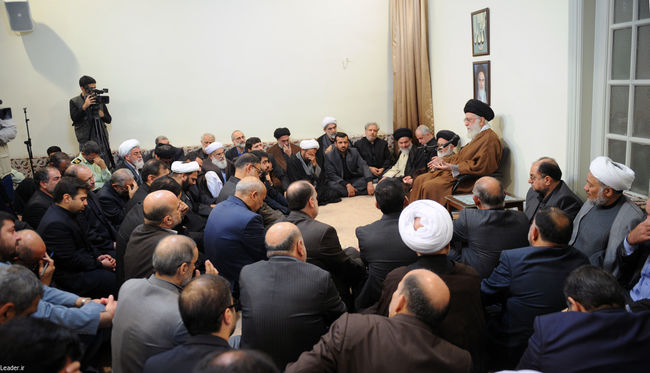 Ayatollah Seyyed Ali Khamenei, the Leader of the Islamic Revolution, in a meeting on Monday with the officials and organizers of the Hajj pilgrimage, described the bitter and surprising disaster that took place at Mina as a divine test. Criticizing the silence of governments, particularly the Western governments and organizations claiming to be advocates of human rights vis-à-vis this big disaster, Ayatollah Khamenei said: “This mishap should by no means be forgotten and the diplomatic apparatus and the Hajj [and Pilgrimage] Organization are duty-bound to firmly follow up on this issue.”
During the meeting, Ayatollah Khamenei highlighted the responsibility of the host government with regard to deaths of about 7,000 Muslims, saying: “After this incident, a unanimous voice of protest must have arisen from the Muslim world, but unfortunately, except for the Islamic Republic of Iran’s voice, no other voice was heard and even governments whose nationals were among the dead pilgrims did not make a noteworthy protest at this tragedy.”
The Leader of the Islamic Revolution mentioned following up on this issue and negotiating with governments to elucidate the significance of the matter and explore ways to prevent its recurrence as an important duty for the country’s officials, particularly the diplomatic apparatus. Ayatollah Khamenei then added: “The appearance of the event indicates that this disaster has happened due to the negligence of the host government. However, at any rate, this issue is not a political issue, but the main problem is over thousands of Muslims who died worshipping and performing the Hajj rituals in Ihram suit, and this issue must be followed up on seriously.”
Ayatollah Khamenei said the sheer silence of the self-declared advocates of human rights in Europe and the United States is another aspect of the Mina tragedy which must be followed up on, pointing out: “The lying and hypercritical bodies, which claim to [be promoting] human rights, as well as the Western governments, which sometimes make great fuss over the death of a single person, remained dead silent in this incident in favor of their allied government.”
“If they were sincere, these self-proclaimed advocates of human rights should have demanded accountability, compensation, guarantee for non-recurrence, and punishment for the perpetrators of this catastrophe,” Ayatollah Khamenei noted.
The Leader of the Islamic Revolution also called on the Hajj and Pilgrimage Organization to keep pursuing the issue and not let this important issue be forgotten, adding: “This issue should not fade into silence and oblivion and must be brought up in international organizations for years and the target of this movement should be the Western governments and organizations with claim to [be promoting] human rights.”
Ayatollah Khamenei offered his heartfelt gratitude to the country’s Hajj officials for their conscientious efforts, particularly mentioning continuous follow-ups as well as high morale and the firm stance adopted by Hojjatoleslam Seyyed Ali Qazi-Asgar, the Leader’s representative for hajj affairs, in addition to all-out efforts, accountability and dutifulness of Mr. Saeed Ohadi, head of the Hajj and Pilgrimage Organization. The Leader of the Islamic Revolution then added: “The recompense and reward for these troubles and struggles are all reserved in the divine scale and it is due to this patience and endeavor on the path of God that Hazrat Zeinab (SA), after witnessing all those suffering and incident(s) in the desert of Karbala, described them as [nothing but] beauty and allure.”
Prior to Ayatollah Khamenei’s remarks, Mr. Qazi-Asgar, presented a report about the activities carried out during this year’s Hajj pilgrimage and also detailed measures taken with regard to the Grand Mosque incident and the bitter incident at Mina, saying: “This disaster is the product of mismanagement and lack of foresight on the part of the Saudi officials, and in collaboration with concerned organs, we will document and pursue its events and mishaps.”
Mr. Ohadi, head of Iran's Hajj and Pilgrimage Organization, also referred to measures taken for the repatriation of the bodies of the innocent victims of Mina disaster and attending to those who were injured in this disaster, saying: “Serious follow-ups are continuously under way in cooperation with other organs in order to shed light on the conditions of the remaining Iranian dead pilgrims.”
The head of the Hajj and Pilgrimage Organization also presented an executive report on this year’s Hajj pilgrimage.