In a meeting with the Ghanaian President 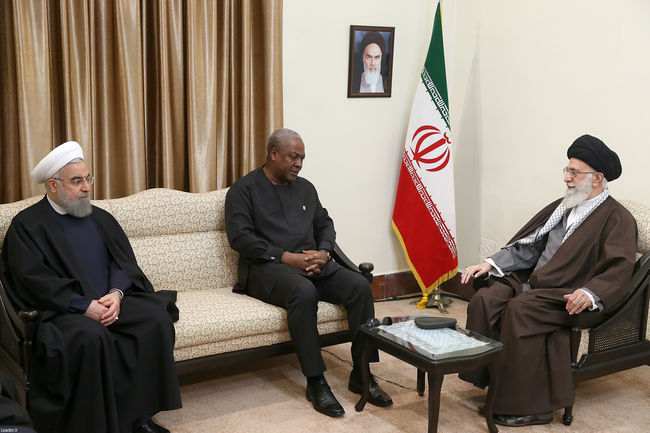 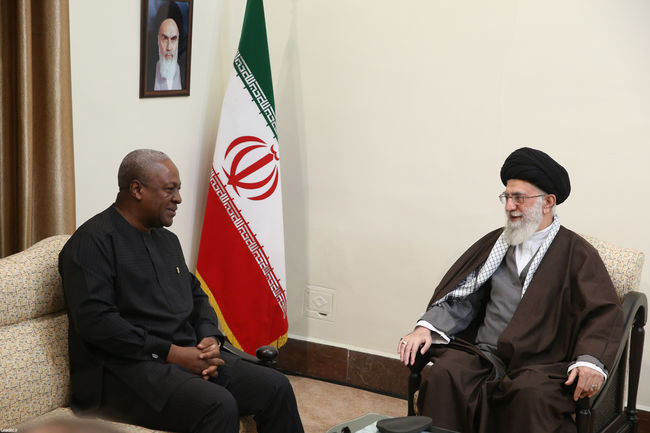 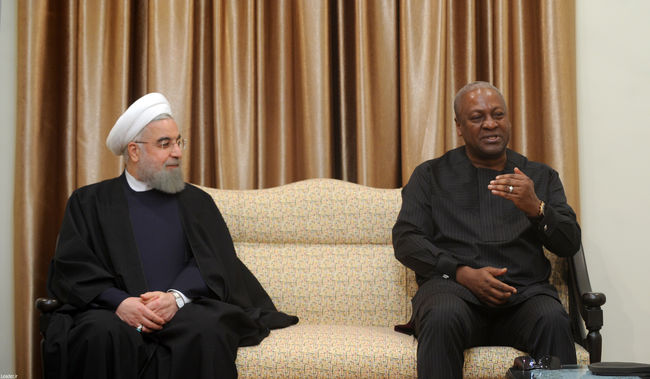 Ayatollah Seyyed Ali Khamenei, the Leader of the Islamic Revolution, in a meeting on Sunday with Ghanaian President John Dramani Mahama highlighted Iran’s positive and favorable position with regard to enhanced cooperation with African countries since the very onset of the 1979 Islamic Revolution, noting: “Hegemonic powers are opposed to Iran’s warm relations with Africa and are also the main source of wars, conflicts and supply of terrorist groups, but the remedy to all these problems lies in the proximity of ‘independent countries’ and increased cooperation between them.”

Ayatollah Khamenei said hegemonic powers’ interests are tied to triggering insecurity and a variety of wars in different spots in the world, adding: “Terrorist groups [operating] in our region and Africa have been nurtured by the spying agencies of the United States, Britain and the Zionist regime [of Israel].”

With reference to the Ghanaian president’s remarks regarding Syria’s sufferings from terrorism, the Leader of the Islamic Revolution asked how such a great deal of sophisticated arms and money is provided to terrorists. Ayatollah Khamenei added: “The root [cause] of all [these] problems is the hegemonic powers, with the US at the top, and the Zionist regime that is the very epitome of evil.”

The Leader of the Islamic Revolution said the Islamic Republic’s unwavering policy on the Syrian issue is “support for peace”, adding: “We have always made efforts to [make sure that] this issue would end up in the best interests of the Syrian nation and we believe that from outside a country, one cannot prescribe remedy for that nation.”

The Leader of the Islamic Revolution said the solution to the Syria issue and countering such problems as terrorism and the sufferings of the Palestinian people would be contingent upon cooperation and more proximity between independent countries, adding: “Iran and Ghana enjoy a lot of good potential, and we hope this trip will result in enhanced cooperation.”

Ayatollah Khamenei heaped praise on independence-seeking struggles by certain African figures against colonial powers and added: “These prominent figures promoted the African identity in the world.”

In this meeting, which was also attended by Iranian President Hassan Rouhani, Ghanaian President Mr John Dramani Mahama highlighted Iran’s rich civilization and pioneering role in scientific spheres. The Ghanaian president said Ayatollah Khamenei’s remarks encourage the construction of a world endowed with peace, and regarding the issue of Palestine, he said: “The pains of the Palestinian nation have worried all nations and we should join hands to defend the rights of the Palestinian nation.”

Referring to the activities of terrorist groups in Africa and West Asia and appreciating Iran’s serious fight against terrorism, the Ghanaian president commented on the complicated situation in Syria: “Iran’s foreign policy is rightly based on respect for nations’ right to decide their own fate, and we hope with Iran’s effective role in fighting terrorism, the issue of Syria will be settled.”

Mr Mahama expressed gratitude to Iran for its humanitarian aid to the Ghanaian people, saying: “On behalf of the African nations, I thank the Islamic Republic [of Iran] for playing a supportive role in favor of freedom-seeking movements in this continent, particularly South Africa’s anti-apartheid movement.”
Referring to his negotiations in Tehran and the signature of a number of memorandums of understanding (MoUs), the Ghanaian president said: “We are ready to enhance cooperation in different sectors.”