“We will strengthen bonds with people to foil enemy plots” 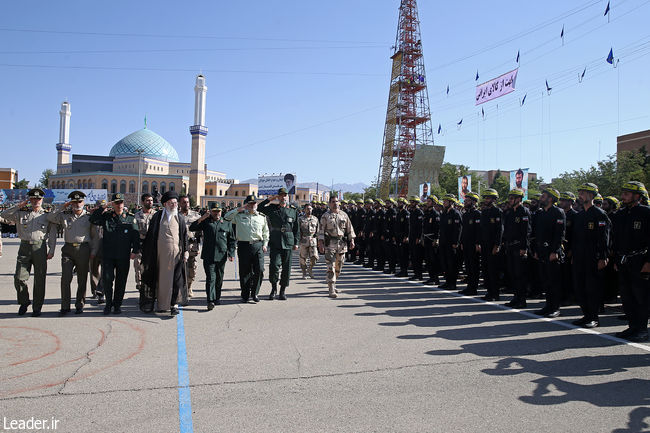 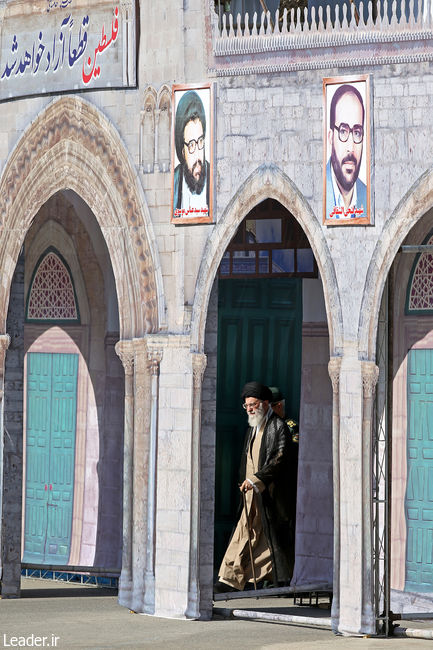 The annual graduation ceremony for military cadets at Imam Hossein University was held on Satruday, June 30, 2018 in the presence of Leader of the Islamic Revolution Ayatollah Seyyed Ali Khamenei, who is also the commander-in-chief of the Iranian Armed Forces.

Upon entering the university premises, the Leader of the Islamic Revolution visited the tombs of the Unknown Martyrs and paid homage to and prayed for the souls of the fallen soldiers of the eight-year Iraqi Imposed War, known as the Sacred Defense (1980-1988) by Iranians.

The Leader then reviewed the military units standing guard on the campus.

Ayatollah Khamenei also commended the war-wounded present on the campus and met and talked with some of the honorable families of the martyrs.

In the ceremony, the Leader of the Islamic Revolution pointed to enemy plots to create a rift between the Islamic Establishment and the people, and called upon everyone, particularly the authorities, to adopt vigilance, steadfastness, prudence and national solidarity and refrain from aristocracy. He stressed, “If the elements of national might are strengthened and no weakness and capitulation is shown toward the enemy, the ill-wishers will once again fail to achieve their objectives.”

He further added, “Piety means taking care of oneself against the enemy and the requirement for this protection is vigilance against enemy machinations and not trusting it, prudence and wisdom as well as abstention from negligence and laxity.”

Ayatollah Khamenei stressed, “If all of the people, including youths and political, economic, security and military officials, adopt this patience and piety, by the grace of God, there will be no blow or harm.”

He said “national self-confidence” and “people’s influence on all of the country’s affairs” are other elements of the might of the Islamic Republic Establishment, adding, “This national self-confidence was accompanied by faith; a faith that, like the soul in the body of the general movement of the country, brought about the grounds for the reinvigoration, hope, sacrifice and selflessness in society and we witnessed many examples of this during the Sacred Defense era.”

Ayatollah Khamenei said daring to act is another fruit of faith and national self-confidence, reiterating, “The Islamic Revolution Guards Corps (IRGC), Construction Jihad [Organization], Basij (Volunteer Forces) and public movements were formed in the country with this spirit and courage and the Armed Forces were revitalized and public service and development bodies and proud scientific movements were created.”

The Leader of the Islamic Revolution said true power emits from inside the nation and is based on independence and freedom, adding, “Might does not mean paying foreigners, purchasing arms from them, storing them and not even being able to use them or [others] coming from another corner of the world and setting up base in a country and sucking their blood to protect the power of a family; these are cases of stupidity and disgrace not power.”

The Leader of the Islamic Revolution said, “Some ask, ‘Why do you exaggerate when you describe the might of the Iranian nation?’ In response, it must be said that this is not exaggeration but is the real truth.”

Ayatollah Khamenei added, “The biggest reason for the might of the Iranian nation is that one of the most bloodthirsty and ruthless powers of the world, namely the US, has spared no effort and villainy over the past 40 years in countering the Iranian nation, but has failed to do a damn thing and on the other hand, the Iranian nation has grown more advanced.”

He stressed that besides the foreign enemy, domestic foes have also been operating and have been busy hatching plots throughout these years. Ayatollah Khamenei added, “Since the success of the Islamic Revolution, three opposition currents existed in the country, ‘the so-called Liberal movement that had pinned its hopes on the US and West,’ ‘the armed Communists which shied away from no move’ and ‘the traitors (the Mujahedin-e Khalq Organization) with an Islamic appearance and a wicked,  profane and characterless inner man’ which even stooped to colluding with infamous Saddam [Hussein, the executed Iraqi dictator] and are now busy offering espionage and snitching for governments such as France, the UK and the US.”

He said another reason for the might and power of the Iranian nation is the formation of regional coalitions by the US against the Islamic Republic Establishment, adding, “If the US could have succeeded to achieve its objectives on its own, it would have no need to forge coalitions with disgraced and reactionary countries in the region.”

Ayatollah Khamenei reiterated, “Due to the power and progress of the Islamic Republic Establishment, the US animosity has grown and of course, the Iranian nation’s hatred of the US has also increased daily.”

The Leader of the Revolution also pointed to the enemy’s design at the current juncture, saying, “The enemy’s agenda is to create rifts and distance between the Establishment and the people and this scheme shows their ignorance because they do not know that the Islamic Republic Establishment is nothing but the Iranian nation and these two are inseparable.”

He stressed that the Islamic Republic of Iran is an establishment based on each and every one of its people and their faith, kindness and passions. Pointing to the failures of the efforts of previous US presidents in countering the Islamic Republic, Ayatollah Khamenei added, “The objective of the recent economic pressures is wearing the people out; however, with God’s will and power, we will strengthen our ties with the people daily and by maintaining our enemy-conquering cohesion, we will boost faithful, motivated and doer youths.”

Addressing the young and proud young generation, Ayatollah Khamenei said, “The enemy is against your independence, honor, progress and presence in the realm of science and diplomacy and the advancement of the country.”

The Leader of the Islamic Revolution stressed that the enemy will continue its mischief as much as it can, reiterating, “If the course of patience and piety alongside with vigilance, prudence and national cohesion is continued strongly, rest assured that the acts of mischief will not bear fruit.”

He pointed to the prescription by some to surrender to the enemy, adding, “The price of capitulation is much higher than resistance and steadfastness and the benefits and achievements of resistance are hundreds of times more that the cost of submission.”

Ayatollah Khamenei stressed, “Yielding to the belligerent and obstinate enemy will result in nothing but being trampled upon and loss of identity.”

The Leader of the Islamic Revolution pointed to an inviolable divine law, saying, “If you do not grow weak or reconcile with the enemy, God almighty will not spare anything in the face of this patience and diligence and will fully reward it.”

In conclusion, he called on all of the Iranian nation and officials to adopt vigilance and monitor their own actions, reiterating, “The officials must take care to avoid negligence, sluggishness, aristocracy, disdain for the people and dependence on the ephemeral seat of authority.”

The Leader of the Islamic Revolution stressed, “The day when the Iranian nation acquires such a status that the enemies would not dare [launch] military, economic, security and political aggression is not far away and the youth will see that day.”

In the ceremony, IRGC Commander Major General Mohammad Ali Ja’fari pointed to the confrontation between the camp of the downtrodden and the hegemonic order, saying, “The revolutionary Iranian nation is on the verge of a key historic experience which will result in the shaping of a new era of distrust in the US and the aggregation of capabilities and energies to counter the assorted schemes of the hegemony.”

Major General Ja’fari added, “The faithful and revolutionary IRGC youths are fully prepared to counter any enemy plot and everyone can predict the fall of the seemingly powerful empires by the depth of the vision and movement of these proud men.”

The commander of Imam Hossein (AS) University, brigadier general Ali Fazli, also read out a report on the measures and agendas of the university, including with regard to increasing combat capabilities and contribution to the provision of relief aid to quake-stricken people.

During the ceremony, a number of distinguished commanders, managers, instructors and researchers of Imam Hossein University (AS) received their awards from the hands of the commander-in-chief and two representatives of the students of Imam Hossein (AS) University were also honored with receiving epaulettes.

The performance of “I’m a Revolutionary” and the enactment of “the pledge of guardianship” and the execution of field exercises were other programs of today’s ceremony at Imam Hossein University.

Also in the ceremony, the units present on the campus paraded before the commander-in-chief.