The Leader in a meeting with Assembly of Experts’ members: 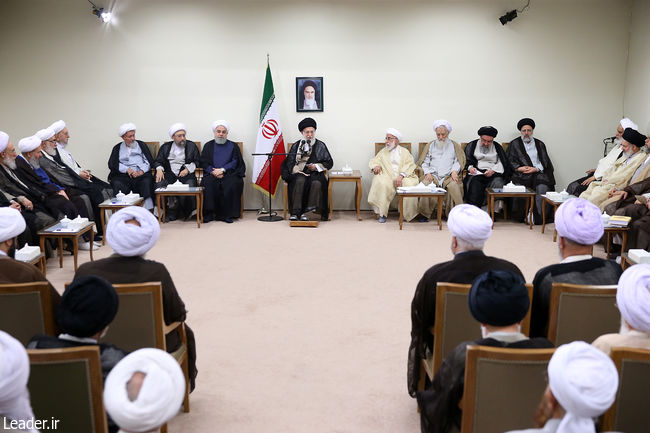 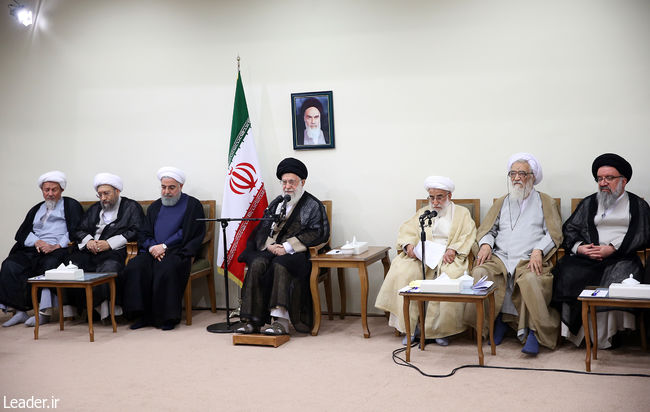 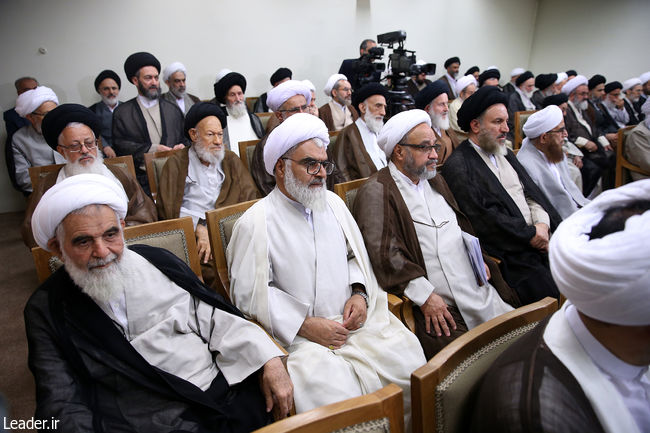 In a meeting with the chairman and other members of the Assembly of Experts, Leader of the Islamic Revolution Ayatollah Seyyed Ali Khamenei said the most important duty of the people and elites at the current perilous juncture is movement toward safeguarding and boosting the integrity of the people with government bodies and refraining from the creation of an atmosphere of despair and disappointment and the sense of having reached a deadlock. He said, “Those wishing the Iranian nation ill have put a media and propaganda war on their agenda in parallel with an economic war; therefore, criticisms should be out of goodwill and aimed at reformation.”

At the beginning of his remarks, the Leader of the Islamic Revolution pointed to the blessed and important days of the second half of the twelfth month of the Islamic calendar, Dhu al-Hijjah, and the historical occasions of the day of Mubahalah and the day of the revelation of Surah of Dahr. He reiterated, “Mubahalah is in fact the manifestation of faith-based power and reliance upon righteousness and we are always in need of faith-based power and reliance upon the righteousness of the Islamic Establishment against Hegemony and in current conditions, the aggregate of the public opinion disposition is confidence toward the righteousness of the movement and direction of the Islamic Establishment path.”

Ayatollah Khamenei went on to express his gratitude over the reports presented in the meeting and pointed to the importance and urgency of national unity and solidarity and formation of public opinion in this direction. He added, “Our conditions today are very sensitive, but this sensitiveness is not due to the high numbers of the enemies or their great power. [This is] because these enemies have always existed since the victory of the Islamic Revolution and they were even more powerful then. However, despite all [their] hostile measures, such as the military attack in Tabas [desert], the imposition of an eight-year war, the downing of a passenger plane and economic blockade, they have not achieved anything and now the Islamic Establishment is like a virtuous tree with firm bases that is bearing fruit and growing.”

He stressed, “The sensitivity of the [current] situation is due to the fact that the Islamic Establishment, through setting on a new course and raising contrasting views and opinions over the past 40 years, has been moving against the general current of hegemony and the domineering system, and in such conditions, in the conflict-ridden jungle of international politics, various conditions and necessities arise and so, in every condition, we must act accordingly and with complete care.”

The Leader of the Islamic Revolution added, “If under any condition and arrangement, the people, particularly the elite, neglect the conditions and status of the Establishment, we will certainly suffer blows.”
Continuing, Ayatollah Khamenei elaborated on the current conditions and their requirements, saying, “Today, the Islamic Establishment is facing an all-out economic war that is being led from a war room and with absolute precision and full attention; however, alongside this war, an important media and propaganda war is also underway, which is neglected most of the time.”

He stressed that this media war existed in the past, but has now grown more intense, adding, “According the intelligence at our disposal, the US and Zionist regime espionage services have set up establishments for this media war and are seriously planning and endeavoring to contaminate the society’s ideological and publicity climate with the financial help of the Qaruns of the region around us.”

The Leader of the Islamic Revolutions stressed, “The objective of this media war is to create angst, despair, disappointment and a sense of deadlock and make the people skeptical toward each other and toward responsible apparatuses and exaggerate the number and magnitude of the economic woes in the mind of the society.”

Ayatollah Khamenei pointed to an example, saying, “In the issues concerning gold coins, foreign currencies and national currency devaluation, the media war and disinformation campaigns by ill-wishers were influential; of course, we don’t expect anything other than wickedness from the enemy; however, we should be careful not to contribute to this misrepresentation aimed at contaminating the minds of the people.”

He stressed that sometimes exaggeration occurs in the expression of problems or criticism, reiterating, “This overstatement will result in the exacerbation of public opinion anxiety and also the spread of the ‘skepticism virus’ in the society.”

The Leader of the Islamic Revolution pointed out that he has always criticized and objected to administrations in various fields, in some cases harshly, since the outset of his leadership tenure, saying, “I am a critical person and do not compromise in dealing with problems and responsible apparatuses; however, I stress that manner of expression and taking action must not be such that the people would grow skeptical.”

Ayatollah Khamenei reiterated, “The general climate of the country must not become such that positive measures and propaganda cannot be believed, but the false statements of the enemy becomes believable; because this condition is very dangerous.”

He stressed that the virus of skepticism toward the administration, Majlis, Judiciary and revolutionary institution is bad, but at the same time said goodwill criticism is necessary to reform affairs, adding, “Sometimes criticisms must be public and must not be whispered in the ear all of the time; however, speaking in a way that the audience is scared stiff and considers everything lost is not a correct move.”

The Leader of the Islamic Revolution added, “Sometimes we make mistakes in the manner of criticism, because the apparatuses that are subjected to criticism also have good deeds that must also be seen and spoken about.”

Ayatollah Khamenei once again stressed that the positive and negative aspects of the administration and other apparatuses must be seen alongside each other, saying, “Stating the evil acts besides the virtuous acts we result in the people knowing that there are also good measures and actions and not be disheartened.”

He stressed that despite all of the disinformation campaigns by ill-wishers and the problems, the Revolution and the country is advancing, saying, “This issue is not being said as a boast, but I say with precise intelligence that the country is moving toward revolutionary concepts, ideals and truths. Although the advance rate might not be as expected, the Establishment is moving forward in various fields of science, industry, political dignity, ideological and spiritual growth and there has been good advances.”

The Leader of the Islamic Revolution cited the daily increasing inclination toward spirituality among youths despite the voluminous misleading contents and propaganda in cyberspace as a clear example, saying, “The huge turnout of the youths in the Arba’een march, hermitage, congregational prayer ceremonies in universities and meetings in the month of Ramadan show progress in spiritual grounds. Why should we not see these positive points and advances? These truths must be seen, analyzed and states, particularly by those who have many audiences.”

Ayatollah Khamenei then elaborated on an important point in the country’s current conditions, namely “coherence between the people and management apparatuses of the country,” saying, “An important part of confidence-building and winning trust hinges on measures by various apparatuses; indeed, those with a tribune must also help this bid.”

The Leader of the Islamic Revolution stressed that no administration can operate without the help and support of the people and the confidence of the people in administrative and judicial apparatuses and Armed Forces must not be destroyed. He added, “The solution to the problems of the country is not walking out on the administration and distancing oneself from the activities of responsible apparatuses, but the remedy is the creation of a healthy link between public opinion and relevant apparatuses, speaking up and making criticism and at the same time providing intellectual and practical help.”

He urged administrative officials to utilize people’s views and the solutions of economic experts including on the issue of the value of national currency and the direction of liquidity. Ayatollah Khamenei said, “The duty of administration officials is using the views of experts and mobility to resolve problems.”

The Leader of the Islamic Revolution pointed to him being concerned in place of others regarding the complications in the minds of public opinion toward efficiency and optimism about settlement of problems, adding, “Our responsibility is guiding the administration officials toward using the views of experts and solving the problems and making the people optimistic about their efforts and in such a case the complications of public opinion will be resolved.”

In response to some remarks, Ayatollah Khamenei said, “My private sessions with administration, judiciary and military authorities are ten times more than general and publicized meetings and in these meetings various issues are discussed that the general public is not aware of.”

The Leader of the Islamic Revolution stressed, “Bickering is not the way to reform, just as the creation of parallel institutions and [doing] parallel work with the administration is not expedient and successful and experience shows that actions should be taken by those responsible for them within legal channels.”

He added, “Officials must carry out the actions diligently; of course, in special cases such as the recent letter by Judiciary chief [Ayatollah Sadeq Amoli Larijani] where laws may not be sufficient and there is need for permission by the Leader, we will certainly be accommodating and help out.”

In conclusion, Ayatollah Khamenei pointed to an example of the advance of the Islamic Establishment in the realm of spirituality and the life story of one of those martyred while defending the shrine in Syria and cited  some versus of the Holy Quran, stressing, “If we stand up against the enemies, they will be forced to back down and with the grace of God, we will bring the hegemony down to its knees and we will show all of the world this example that if the supporters of Islam be ready to defend and struggle, they will certainly prevail.” Prior to the remarks of the Leader of the Islamic Revolution, Ayatollah Jannati, the chairman of the Assembly of Experts, pointed to the formation of a think tank in this body, saying, “As well as drawing up rules of procedure for think tanks, work groups on subjects such as religion and culture, economy, socio-politics, science and technology and legal-judicial have been formed and are currently operating.”

The head of the Assembly of Experts said the main issue of the country is the economy, the turmoil in the currency market and price hikes, reiterating, “In the current conditions, given the predicaments of the people, we need a revolutionary and diligent move to see off the problems.”

Also, Ayatollah Ali Movahhedi Kermani, the vice-chairman of the Assembly of Experts, enumerated the topics of the remarks of the members of the body in the recent session, saying, “Due to the economic problems of the people, the recent meeting of the Assembly of Experts was dedicated to economic issues and the success rate of the three branches [of the government] in resolving them.”