The Leader in a meeting with Russian president:

US defeat in Syria shows Washington can be reined in 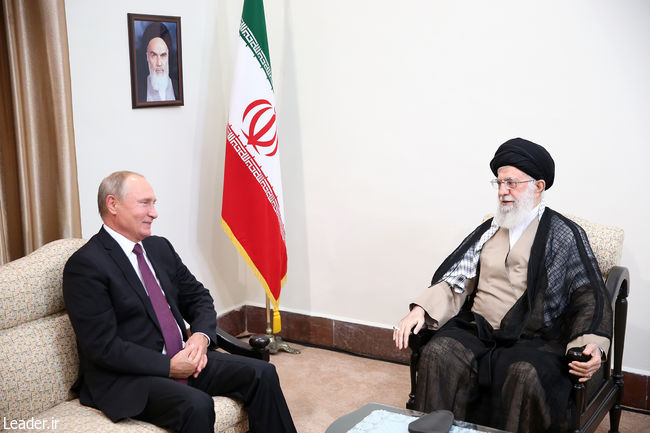 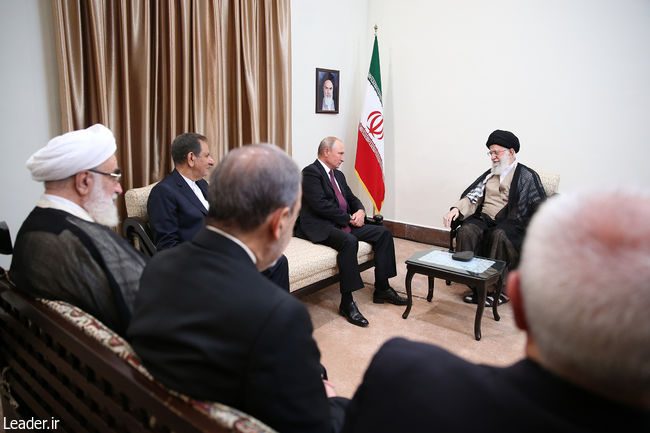 In a meeting with Russian President Vladimir Putin and his accompanying delegation, Leader of the Islamic Revolution Ayatollah Seyyed Ali Khamenei expressed hope that the Tehran Trilateral Summit on Syria would be fruitful and approved the remarks by the Russian president about the need to further expand bilateral ties. He said, “The cooperation between Iran and Russia on the issue of Syria is a prominent example and a very good experience in bilateral cooperation, which is in the real sense of the word, synergy.”

The Leader of the Islamic Revolution stressed that cooperation between Iran and Russia can extend to global issues, adding, “One of the cases where the two sides can have cooperation is containing the US because the US is a danger to humanity and it is possible to restrain it.”

Ayatollah Khamenei said the Syrian issue is a successful example of containing the US, reiterating, “The Americans have now truly been defeated in Syria and failed to achieve their goals.”

He elaborated on the goals of the US when Syrian developments began to unfold, particularly after the fall of the US-dependent governments in Egypt and Tunisia, saying, “The Americans sought to make up for the blow sustained in Egypt and Tunisia by toppling the pro-resistance government in Syria by exploiting the conditions that had arisen in Arab countries at the time; however, they have now been fully defeated.”

The Leader of the Islamic Revolution said the sanctions on Iran, Russia and Turkey are a very strong common point for the expansion of cooperation, adding, “While strengthening political and economic cooperation, Iran and Russia should seriously follow through on the agreements reached at the Tehran Summit.”

Ayatollah Khamenei also underscored the need to make economic transactions and deals outside the framework of the dollar.

In another part of his remarks, the Leader of the Islamic Revolution pointed to comments by Putin about the 2015 Iran nuclear deal, officially called the Joint Comprehensive Plan of Action (JCPOA), saying, “The Islamic Republic of Iran has so far been committed to its obligations under the JCPOA; however, the Europeans have not fulfilled their responsibilities and it is unacceptable that we fully abide by our commitments under the JCPOA while they fail to honor their commitments.”

Ayatollah Khamenei said the views of the Russian president on the JCPOA are expressed out of good will, stressing, “Concerning the JCPOA, the Islamic Republic of Iran will adopt a stance that will serve the interests and dignity of the country and nation.”

He added, “Although the Americans now raise missile and regional issues about Iran, their issue with the Islamic Republic transcends these subjects.”

Ayatollah Khamenei also stressed that the grounds exist for Russia’s involvement in other regional issues and pointed to the dreadful condition of the Yemeni people and their massacre by the Saudis, adding, “Saudis will certainly fail to achieve their goals in Yemen and they will fail to bring the resilient Yemeni people to their knees.”

In the meeting, which was also attended by Iran’s First Vice President Es’haq Jahangiri, the Russian president assessed as productive and very good his negotiations with his Iranian counterpart on bilateral issues and the case of Syria, saying, “In these talks, we stressed upon the need for the expansion of bilateral ties in all areas, particularly in economic and trade cooperation.”

Putin added, “In the energy sector, we made the proposal of building a new nuclear power plant and low-capacity power plants and studied the electrification of railways and increasing Iran’s oil sales.”

The Russian president said the existing capacities and facilities for the expansion of relations between the two countries are far greater than the current level of cooperation and pointed to US obstructionism in this regard by resorting to various means such as financial transactions. He said, “By creating restrictions in financial transactions, the Americans are making a big strategic mistake, because for the price of a political and short-term success, they will cause loss of confidence in the dollar in the global atmosphere and its weakening.”

The Russian president said the issue of the JCPOA was another topic of negotiations with the Iranian president and expressed regret that some parties opposite Iran have not been committed to their obligations, saying, “The Americans have ruined things through improper measures and the Europeans are following them in practice due to their dependence on the US, even though they declare that they are looking for ways to save the JCPOA.”