The Leader in a meeting with Iranian medalists in Asian games:

Ahvaz terror attack culprits to get a thrashing 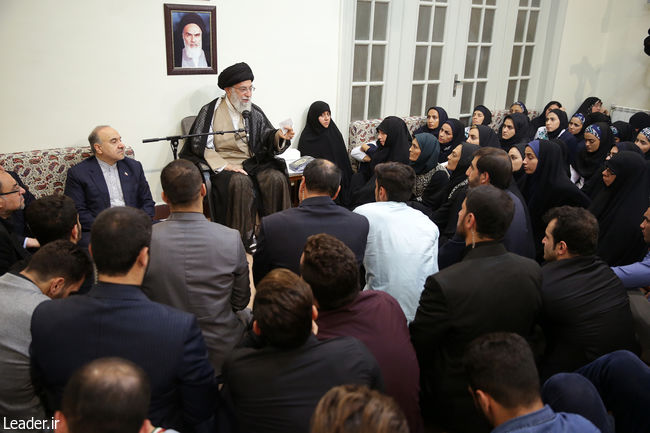 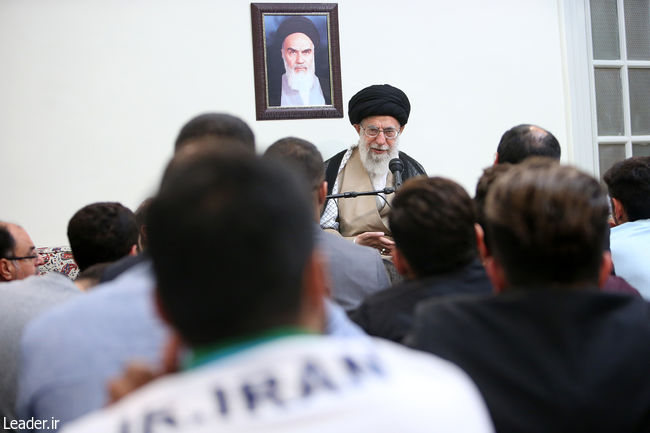 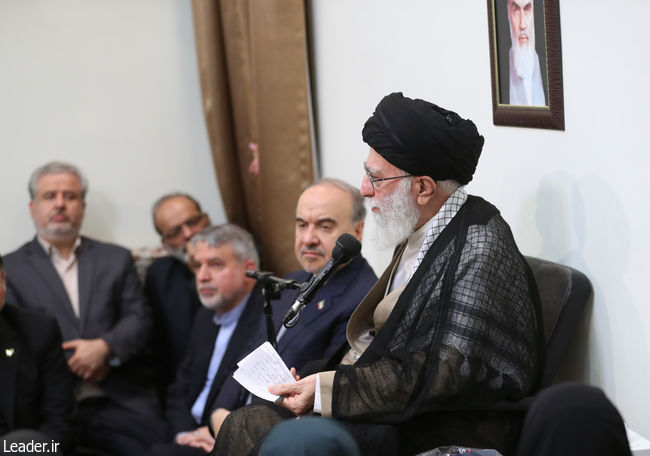 A group of medal-winning athletes who brought honor upon Iran in the 2018 Asian Games in Jakarta, Indonesia, met and talked with Leader of the Islamic Revolution Ayatollah Seyyed Ali Khamenei.

In the meeting, prior to making any comments to the athletes, Ayatollah Khamenei said the fervent and passionate turnout of the Iranian nation in the ceremonies marking the martyrdom anniversary of Imam Hussein (PBUH), the third Shia Imam, was larger and more profound than that of the previous years and pointed to the terrorist attack two days ago in the city of Ahvaz, saying, “This bitter incident once again showed that the Iranian nation has many enemies in the proud path of progress and growth.”

He described as cowardly the attack on defenseless people, reiterating, “The courageous act is that of the exuberant youths of the country who bring honor in scientific, defensive and sports arenas.”

He added, “According to reports, this craven act was carried out by the same people who are rescued by the Americans whenever they run into trouble in Syria and Iraq and are bankrolled by Saudi Arabia and the United Arab Emirates.”

The Leader of the Islamic Revolution stressed, “We will certainly give a severe thrashing to the elements behind this move.”

Ayatollah Khamenei devoted the next part of his remarks to highlighting the value of the great deed of medalists and offering some recommendations to them.

Addressing the athletes, he said, “You are the genuine medals, because the greatest benefit for a country and the prerequisite to its advance is the existence of efficient, faithful, serious, intelligent and diligent human resources.”

The Leader of the Revolution said the boys and girls bringing honor in international games results in the jubilation of sovereign nations and at the same time rage of the hegemonic front. He added, “The hegemons become furious at the triumph of the Iranian nation in any sector; therefore, your victory is in fact the victories of the nation and the defeat of the expansive front of the enemies of Iran and that is why I am truly proud of you and my message of gratitude is heartfelt in the true sense of the word.”

He pointed to the relentless efforts by the enemies to conceal the great successes of the Iranian nation in various realms, saying, “Indeed, you beloved athletes bringing honor before the eyes of hundreds of millions of people in the world is undeniable and this asset doubles the value of your actions.”

Ayatollah Khamenei said the creation of enduring scenes such as athletes praying, prostrating before the divine court after victory, dedicating their medals to proud martyrs, female athletes retaining their dignity and observing the Islamic hijab in the games show the Iranian, Islamic and revolutionary identity and character of the zealous athletes of Iran. He stressed, “The hired champions of some countries are incapable of showing the identity of that nation; however, our noble champions represent the identity of the Iranian nation with such honor and your actions cannot be valued with any material calculation.”

The Leader of the Islamic Revolution approached from the same angle the topic of threats issued to our country’s athletes by some foreign centers, saying, “Submission and subordination to the hegemons’ norms is not a source of pride; therefore, in the face of threats that if you do not compete in such-and-such a game or fail to carry out such-and-such a measure, so-and-so federation would be displeased with you, you should not yield to wrong and imposed threats and norms.”

He stressed that the realm of sports is not the realm of fear and consideration but the realm of courage and advance, saying, “Values and nobilities cannot and must not be trampled underfoot; indeed, the opponents of the values of the Iranian nation cannot do anything either, just as last year, after beloved Alireza Karimi accepted defeat for a greater goal, he and the wrestling federation were threatened; however, this honor-winning youth participated and was crowned in this year’s tournament.”

The Leader of the Islamic Revolution stressed, “The Islamic Republic of Iran will not take part in sports games against the representatives of the usurper regime and we believe that this move itself, an instance of which was carried out by Alireza Karimi last year, is a real championship.”

He pointed to the special attention given by the people to young champions, urging them to “‘be humble, religious, progressive revolutionary and family-loving’ at the same time as being champions so that in the eyes of the people you would become a role model for ‘righteousness, nobility and purity’.”

The Leader of the Islamic Revolution described the meeting with the honor-winning Iranian sports entourage as very sweet and described this day as a memorable day, saying, “Professional sports must like a mountain summit encourage all the people to do sports and make sports sweet in the eyes of everybody.”

In this meeting, which was held in an intimate and fervid atmosphere, each of the sports champions introduced themselves and made some points about their honors and past records.

In the meeting, which was attended by Minister of Sports and Youth Masoud Soltanifar, Secretary General of the National Olympic Committee of the Islamic Republic of Iran Shahrokh Shahnazi and the heads of some federations, the medal-winners of the Asian games attended noon and afternoon prayers led by the Leader of the Islamic Revolution.