In a meeting with a group of academic elites

The Leader: US plot to demonize Iran will fail 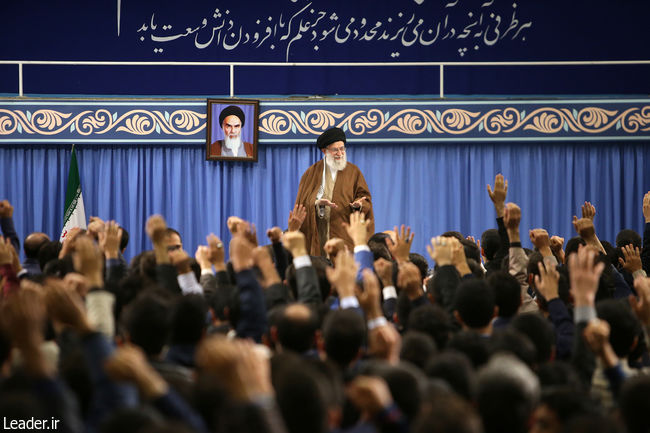 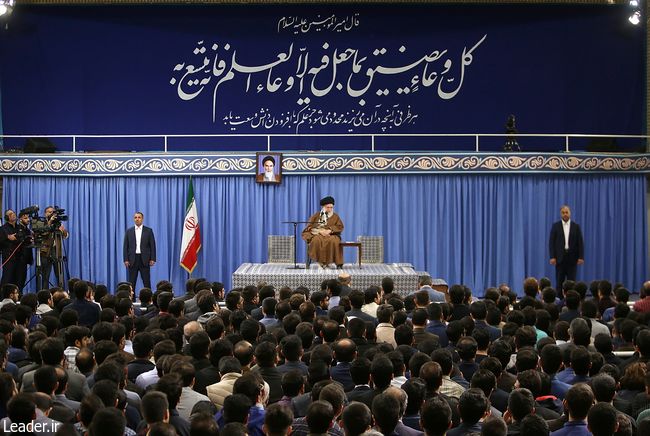 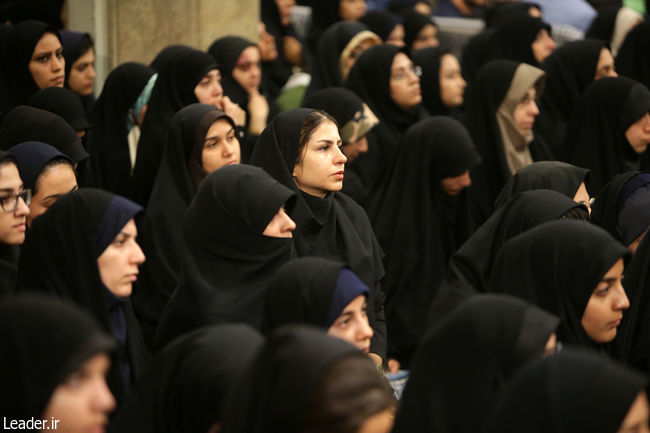 A group of academic elites of the country—including CEOs of knowledge-based enterprises; prominent academics who have returned from abroad; top ranking participants of Olympiads, cross-country contests and scientific festivals; outstanding academic researchers from different universities; exceptionally talented students as well as students ranking top in the 2018 cross-country university entrance exam—met with the Leader of the Islamic Revolution, Ayatollah Khamenei,on October 17, 2018.

In this meeting, Ayatollah Khamenei urged officials to benefit from the ideas and recommendations of the academics in order to improve the country’s affairs and said: The intellectual elites[‘s ideas and suggestions] should be benefitted from in planning the matters of the country. Some outstanding talents enjoy both a great capability of thinking and management skills— which must be made use of.

Ayatollah Khamenei mentioned that Iran should safeguard its entity via scientific development by stating: If we do not advance in science, our enemies' threats will last permanently.

The Leader of the Islamic Revolution held: Today human science faces limits; our academic elites should participate in pushing the limits.

Ayatollah Khamenei attributed nation’s falling behind world’s scientific growth to neglecting science during the monarchical rules of the Pahlavis and Qajars over Iran, and maintained: We have lagged behind the global scientific movement for 200 years,: this is because of the Iranian talent and academic elite have been ignored.

The Supreme Leader went on to say: This talent has always existed in Iran throughout history and it stems from great personalities like Farabi, Avicenna, and Khwarizmi, and others. However, why should our country lag behind the rest of the world at a time when science has advanced at a great pace around the world?— such that during the eras of Qajar and Pahlavi, our country turned into one of the most backward countries in this respect.

Ayatollah Khamenei urged the academic and science professionals to promote Iran’s share in science production; he asserted: Our country entails about one percent of the world population; this, our share of human efforts should be at least one percent. However, during the final years of the Pahlavi Regime, Iran was producing about 1/10 percent of world science, which shows how backward we used to be!

Ayatollah Khamenei added: Today, with God’s grace, we contribute in producing science even more than our share, about 1.9 percent. This is great, yet we are not satisfied; it should increase.

Ayatollah Khamenei praised Islamic Republic of Iran’s improvements in academic activities compared to that of pre-Revolution and held: The establishment of the first university in Iran, in 1934, till 44 years late—that is in 1978, we only had 150,000 university students; whereas, today we have over 4 million university students. The two different systems are revealed in these areas. We should appreciate the Islamic Republic for this great move.

The Supreme Leader remarked that the establishment must collaborate with the academics and intellectuals to further the development of the nation and said: There should be a mutual exchange between the elites and the management system. The government must provide services for the elites, not letting the elites be left with no roles; because in this case, our country won’t advance. Today, it is proved that nothing is more influential in the country’s development than the human force. Human resources are a great capital and the enemies seek to take this wealth away from the country. The enemy seeks scientific exclusion so no other nation can gain power-producing and wealth-producing knowledge; thus, they murder scientists of other countries. This does not only happen to us. During the time the U.S. dominated Iraq, tens of Iraqi scientists were identified and killed, so that Iraq would not progress in the absence of Saddam.
Referring to the elites’ national and international impact from different points of view, Ayatollah Khamenei added: “the existence of tens of thousands of elites, is from one point of view, indicative of an authentic and real image of the country: a source for happiness and hope. Moreover, by benefitting from the scientific elites, the frameworks of management of the country’s affairs will promote: the elites’ opinions must be applied.”
He reminded his audience: “The young, active, enthusiastic, and hard-working elites’ opinions should be used in various departments including oil industry. Planning is needed for changing the petro-economy into an independent, evidence-based and resilient economy.”
Ayatollah Khamenei reiterated: “If we advance scientifically, the threats of our enemies will not last forever, and will perish.”
Then, he regarded another area of the academic elites’ influence as “playing a role in breaking global borders of science” and went on to say, “In recent centuries, our share of pushing the borders of science away has been very little; we need to extend the borders of global knowledge and discoveries by using the great capacity of Iranian scientific and academic elites.”
Ayatollah Khamenei emphasized: “All of us should be grateful to the Islamic Republic and Imam Khomeini for putting an end to the bitter past and bringing about the present advances.”
The Leader of the Revolution, then, offered a few recommendations with regard to the elites. His first recommendation was on the necessity of mutual exchange between elites and the management system of the country. In this regard he stated: “On the one hand, the officials should work more seriously to exchange with the academic and scientific elites, offer services to them and remove obstacles in their way. On the other hand, the elites should make use of all their capacity to help move the country forward.”
Ayatollah Khamenei described the qualified human resources and active and forward-moving academic and scientific elites as a great wealth and reserve for the nation, maintaining: “this source of wealth, just like all other resources, is threatened by the avarice and exploitation of the Hegemonic system, so that while getting advantage of the wealth to serve its own purposes, the hegemonic system creates exclusion, in science and technology; that is, wealth-producing and power-producing properties.”
He regarded “physical removal of the academic elites” as a method used by the hegemonic system for taking the great treasure away from the nations and mentioned—referring to the nuclear scientists of Iran: “In addition to the physical removal, cultural deviation or occupying the elites with other affairs is another method used by the hegemonic system; hence the officials and elites should be aware and cautious in this regard.
Ayatollah Khamenei praised recent effort by a group of experts to delineate a blueprint for progress, asserting: What a group of economists did recently made me extremely happy: the Iranian economists felt responsible and addressed a letter to the leader of the revolution regarding the issues of banking and liquidity and foreign currency. Though we don’t know how much these opinions are taken into account in the government, the fact that professors and young elites feel responsible about the problems of the country is very pleasing.
Finally Ayatollah Khamenei ensured his audience that; “There exist some problems regarding people’s livelihood—partly due to currency fluctuations. Yet, overall, the true image of the country, is the opposite of what the hegemonic foreigners seek to illustrate about dear Iran.