We will defeat the enemy, but economic deterrence is required 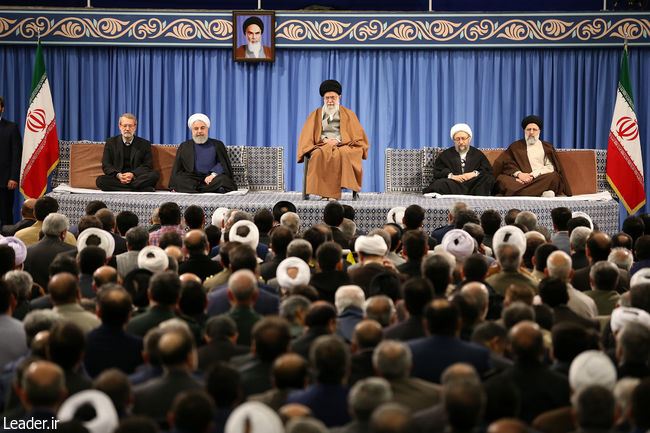 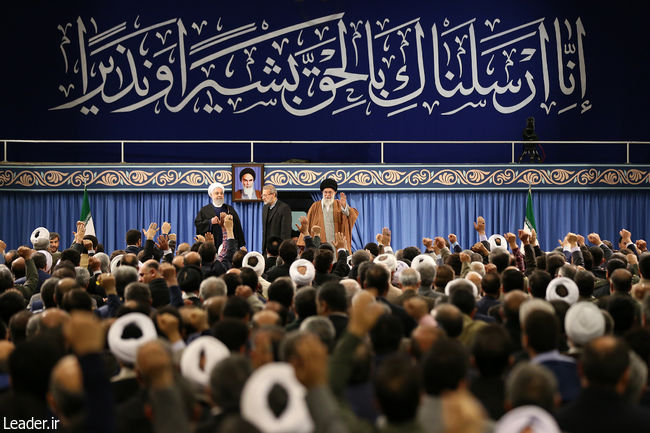 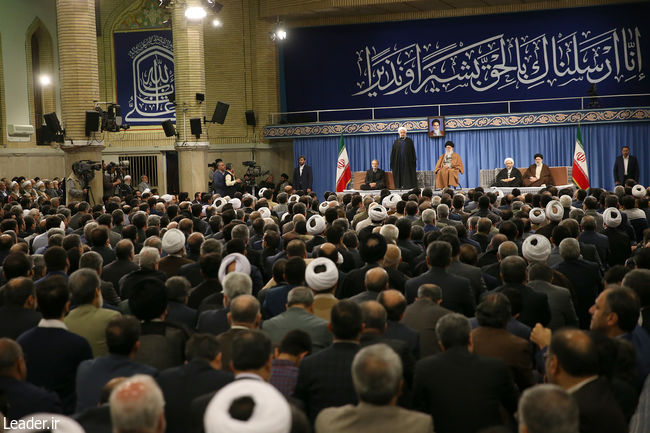 On the anniversary of the appointment of Muhammad (p.b.u.h.) to prophethood, a group of government officials and ambassadors of Islamic countries met with Ayatollah Khamenei-- the Leader of the Islamic Revolution-- this morning, April 3, 2019.
In this meeting the Supreme Leader of the Islamic Revolution—Ayatollah Khamenei—pointed to the recent destructive flood that has hit various provinces of Iran and held: Due to the recent floods, our dear nation has been afflicted with difficulties, damage, and mortalities, and we hope that the respected officials—with the extensive support of the people—can help the people get out of the difficult time; by the grace of this holy day, may God’s mercy be on these people and make them happy.
Ayatollah Khamenei praised God for the spirit of cooperation among the people to help one another in times of hardship and asserted: Thanks be to God, people’s efforts in this incident has been wonderful; this is not the first time: in all natural disasters, the Iranian nation entered the scene vigorously. This spirit of solidarity and mobilization of the people is extraordinary, which also motivates and helps the government. Both the people and the officials were united to realize the first steps; of course, much is left to be done; the main tasks are left to be done. The reconstruction of the houses and farms are yet to be realized and compensated for.
The Supreme Leader invited everyone to assist the officials in charge in their relief efforts and added: The dear people should continue to assist the officials because their collaboration is truly effective.
Congratulating his audience and the Muslim nation on the ‘Eid of Mab’ath that marks the appointment of Muhammad (p.b.u.h.) to prophethood, Ayatollah Khamenei maintained: The rising of the holy prophets (Be’that) is aimed at creating a utopian or nearly perfect society and civilization. There is everything in a civilization: science and knowledge, morals, lifestyles, and war. It is not that Islam emerged to obliterate war; no! But the motives of the war are important. War against whom?
His Eminence went on to say: In the Quran, there are many instances where ‘the sending of the prophets’ is referred to as Be’that and rising. Primarily, this rising is for the sake of worshiping God; secondly, it is aimed at rejecting tyranny. Tyranny [taghut] represents all the oppressive and vicious rulers and in today’s world, examples include all the presidents of the U.S. and some other countries.
The Leader of the Islamic Revolution stressed that the arrogant powers of the world launch wars in quest of domination and sustained: The tyrannical powers of the world fight for the sake of their own power, seeking to quench their own desires. The Zionists have been fighting for their vicious goals for many years. However, Hezbollah and Palestinian strivers fight against them. Our nation also fought back during the 8-year U.S.-backed Saddam’s war. This type of war is celebrated because it pursues divine goals.  Believers fight too, albeit, for divine goals.
Ayatollah Khamenei mentioned that the rising of the prophets is the most comprehensive resurrection and added: The rising of the prophets is the most complete, comprehensive and eternal rising and Be’that. Even today, Be’that and resurrection is taking place. When you read the Quran and you are inspired; when the Iranian nation followed Imam Khomeini (r.a.) and tolerated the hardships, and disturbed a rotten system after some thousand years and built the Islamic system over it, it is the continuation of Be’that.
The Supreme Leader of the Islamic Revolution slammed enemies who oppose the Islamic Republic and held: Those who oppose the Islamic Republic today, are like those who opposed Be’that [the appointment of the Prophet] at the early years of Islam. Some say, ‘do not make enemies for yourself’. No, we do not do that. We reiterate the word of Islam; as a result, animosity is roused. The U.S. wants you to stop following Islam. Others who follow the U.S.—like the Saudi Regime—also seek the same goal. In this confrontation of tyranny and monotheism, the one that the Almighty God has determined to be victorious is the front of Truth. That is, if you the Iranian nation persist in your efforts, you will certainly defeat the enemy, the U.S.
Ayatollah Khamenei praised the young among the Iranian nation for their strong determination and motivation and asserted: Our young people today have more motivation, wisdom and preparation compared to the past. That is why I address young people.  The young people are ready today to take action in many fronts. Fighting is not only about carrying a gun. We never fight against anyone, as long as they do not attack us. But in other fronts, like the fronts of science, ethics and lifestyle, we move forward and advance.
Finally, Ayatollah Khamenei gave tidings of a brighter future and pronounced: In the matters of economy, culture, and politics, everyone and in particular the youth should be active. The future belongs to the believing and zealous young one who can make this country reach the climax of prosperity with determination and innovation.