Ayatollah Khamenei in a meeting with a group of Police Force commanders:

Police Force should safeguard people's security on the cyberspace 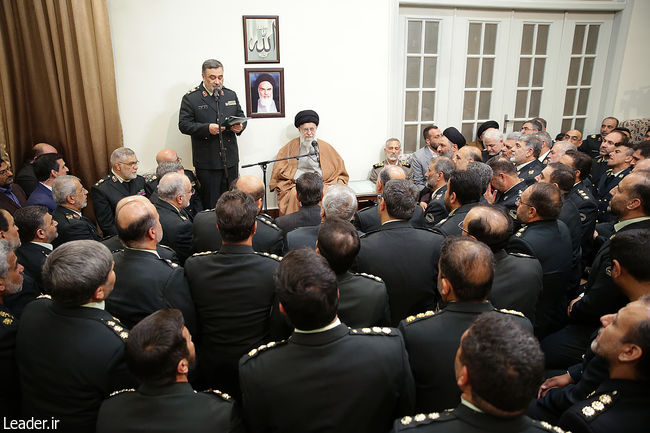 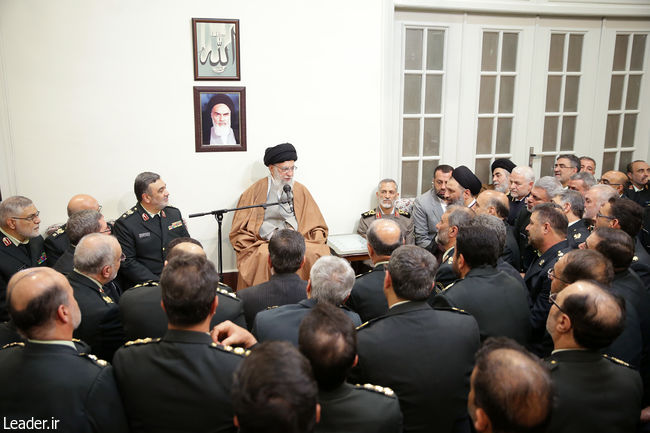 A group of commanders of Police Force met with Ayatollah Khamenei—the Supreme Leader of the Islamic Revolution—on April 28, 2019.
In this meeting, the Commander-in-Chief of Iran’s Armed Forces—Ayatollah Khamenei—stressed the need to persist with the current movement of the Police Forces towards the ideal Police Force as set by the Islamic Republic, and asserted: The Police Forces should seriously counter smuggling and confront those who disturb the security of the cyberspace.
Regarding as significant the Police Forces’ role in the realization of the year’s motto—that is ‘Boosting Production’—as well as providing security on the cyberspace, the Supreme Leader called sovereignty and compassion the two complementing characteristics of the Police Forces.
Ayatollah Khamenei referred to the 24-hour services and endeavors of the hard-working Police staff during ‘Eids and holidays, his eminence added: In the event of recent floods, the Police Forces performed luminously by serving the affected populations and securing the flood-stricken regions.
The Leader of the Islamic Revolution described the achievements by the Police Forces in recent years as a valuable reality and went on to say: Yet, it does not mean that the Police Force is already at the esteemed status desired by the Islamic Republic. That status should be achieved by continuous work; and any factor that might make the people question the virtues and honors of the Police Force, be it an unqualified officer in a police station, should be corrected.
Ayatollah Khamenei stressed that profit is not the only reason behind the illegal trafficking of products and warned of possible conspiracies by stating that: It is not only a quest for profit that motivates some of these [smugglings]; rather, there is a plot, a plan with evil intentions involved in some case and the Police must confront with utter vigilance.
The Supreme Leader pointed out to cybersecurity as another important issue and maintained: Today the cyberspace is widely present in people’s life and despite its benefits and potentials, it also poses grave risks.
His Eminence added that a lack of security on the cyberspace is harmful to people and reiterated the duty of the Police in providing cybersecurity.
Ayatollah Khamenei referred to "the prohibition of arms trade" as another important duty to be fulfilled by the Police Forces and stated: In some countries like the United States, the sale and purchase of weapons are allowed due to the profit arm manufacturers win; nevertheless it causes problems for the people. In our country, however, this is not allowed and the prohibition must be enforced.
Pointing out to a recent tragedy wherein a clergy was murdered in Hamadan, the Leader of the Revolution insisted on preventing the sale of arms on the cyberspace and held: The person who murdered a clergy in Hamadan yesterday had previously published his photos with 4 different handguns and rifles, and confronting such matters falls under the responsibility of the Police Forces.
Before the Leader of the Islamic Revolution commenced his statements, Brigadier General Ashtari—the Commander-in-Chief of the Police Force—reported on some of the services offered by the Police Forces including active involvement in and providing security at different events such as the Arbaeen pilgrimage, identifying and confronting economic corruption, special planning for Nowruz holidays to reduce accidents and road casualties, mobilization of forces and facilities to help flood victims and providing security in those regions, and said: During the second phase of the Revolution, with great resolution, administrative transparency, sincerity, and offering unconditional service to the people, our goal will be to achieve a Police Force in the same status as desired by the Revolution and the Islamic Civilization.