Ayatollah Khamenei in a meeting with a group of teachers:

Executing 2030 agenda, means training soldiers for US and UK 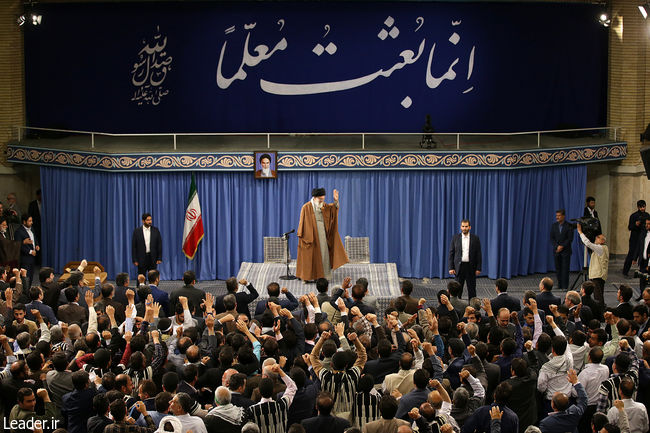 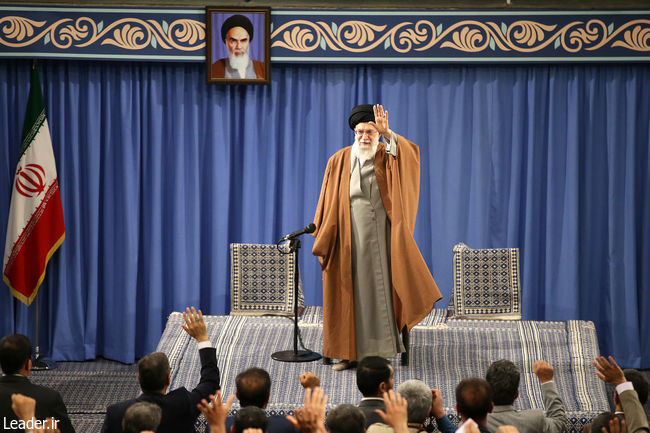 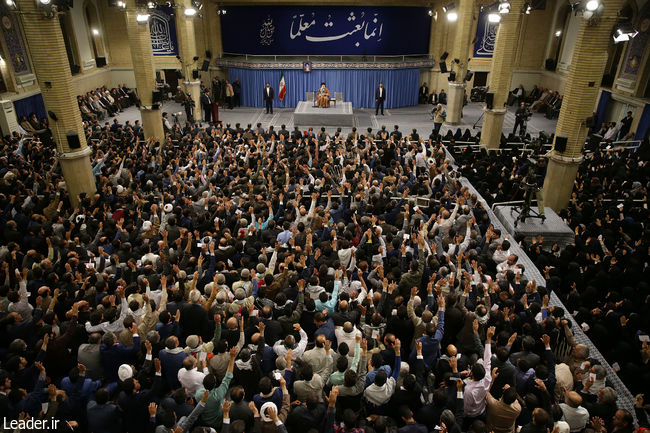 As the National Teachers' Day approaches, a group of teachers and education officials from across the country met with Ayatollah Khamenei—the Supreme Leader of the Islamic Revolution—at the Hussayniyeh of Imam Khomeini on May 1, 2019.

In this meeting, Ayatollah Khamenei praised teachers for the great role they play in building civilizations and asserted: You the teachers are in fact building the cultural identity of the society. Civilization relies on culture. Without a strong and rich culture, civilization would not be created.
His Eminence slammed the UN 2030 Agenda for nations’ educational system for imposing a Western system and went on to say: This is where the importance of the 2030 Agenda is revealed. The essence of this agenda is that our educational system would teach children a lifestyle and philosophy of life-based on Western principles. This means that you, the teachers would train soldiers and footmen for the West in your classrooms.
The Supreme Leader described the 2030 agenda for the education system as a means of foisting Western intellectual strategies on nations that implement it and held: They are working on this 2030 Agenda so much because the instructions and advice for the educational system it implies are meant to adjust students’ system of thoughts in a way that the principles of their life would be built upon Western thoughts.
Ayatollah Khamenei further described the 2030 agenda’s goal to train soldiers for the West and maintained: It implies that you would train soldiers for Britain, the U.S. and the rest of the well-dressed, perfumed savages: the ones who murder and assist the murderers without giving a care. They say, “we help the Saudis because we need their money!” Now they want us to raise soldiers and footmen for them in Islamic countries. This is what the 2030 agenda is about.
The Supreme Leader regarded human resources as the most important asset for a nation and said: The most important subject of civilization for us is education. For a country and a civilization, the most important capital is human capital. That is to say, having money but lacking human capital, you would not get to anywhere. Just like some wealthy countries who devote their big pockets to traitors to humanity, because they lack human assets.

His Eminence described the plunder of Iran’s oil reserves during the tyrannical regimes ruling over Iran as another example and added: [Another example is] our country lies on an ocean of oil. We were unaware of it and did not even have the know-how [to extract it]. Those who knew took away our oil built themselves factories used it in their wars and gave us a little something in return during the monarchy. This is the result of neglecting to invest on human capital.

Ayatollah Khamenei dubbed teachers as the builders of the new civilization by asserting: I am not one to flatter and whatever I have stated during all these years regarding teachers has come from the belief that teachers are the builders of the new civilization. Because without worthy men and women there would be no civilization.
Imam Khamenei added: You are the fighters in the battlefield against ignorance and illiteracy. With a healthy education system, we will get to the future that we wish for.

The Leader of the Revolution stated: The healthy education system we seek would nurture wise, capable, thoughtful, virtuous, pious, chaste, efficient, ingenious, brave and practical men and women. Those who would not fear the enemy and do not evade or neglect [responsibilities].
Ayatollah Khamenei described such an educational system as the prerequisite to the ideal status Iran would win in science and knowledge where anyone would feel the need for learning Persian in order to acquire knowledge, asserting that: If we have such an educational system, the country would get to what I wished for and promised: the status where anyone who seeks to comprehend the frontiers of science would need to learn Persian. The education of such youth is the foundation for the Iran of tomorrow.
The Supreme Leader criticized those who slam the educational system over minor shortcomings and held: There are problems and shortcomings that we will address by God's help. The community of educators has performed remarkable feats during the past 40 years. Some seek to degrade the education system for different political reasons. This is unfair. Of course, I know about the shortcomings. But I am also aware of the long way the education system has come from the deplorable situation before the Revolution.
Ayatollah Khamenei praised the teachers and officials of the educational system for raising scientists and revolutionary generations decades after the Islamic Revolution and maintained: These different scientists, for example, who have placed the country among the top 5 countries of the world in nanoscience were nurtured by you. The third and fourth generations of the Revolution who have not met Imam Khomeini and the martyrs of the 8-year Saddam’s US-backed war on Iran, and who stand against the enemy today to defend their faith, sacrificing their lives are nurtured by this education system, despite the world of internet, satellite TV, and different vices that exist.
His Eminence further added: Who educated the youth who go on trips to help people as a way of Jihad? So many great scientific works have been accomplished in the country. So many manifestations of faith are present in the country. So many students and teachers. This is all the outcome of the education system. Do not underestimate the education after the Revolution.
Ayatollah Khamenei warned those who seek to inculcate despair and pessimism among the revolutionary youth by saying: God will not let go of those who weaken the revolutionary spirit with their writings.
The Leader described the revolutionary spirit among the nation as the driving force behind the Islamic Revolution of 1970 and stressed: It was the nation’s revolutionary spirit that overthrew the Pahlavi regime. People gave their lives for this Revolution to happen, and free the country from the domination of foreigners.
Referring to the Pahlavi era as an era of humiliation for the Iranian nation at the hands of the Pahlavi family, Ayatollah Khamenei declared: There were 2 kings during the Pahlavi regime: Reza and Mohammad Reza. Reza Shah was brought to power by the United Kingdom. Mohammad Reza was brought to power by the UK and the US.
Mentioning Reza Khan’s interest in Hitler as a dictator, the Supreme Leader added: Reza Shah was brought to power by the British. Later during the World War, he was attracted by Hitler. This made the British angry and they ordered him to step down, which he did. If he had a bit of decency, he would not step down and even die for it.

Ayatollah Khamenei told his audience: The Islamic Revolution overthrew this regime. The revolutionary spirit is the life and soul of this nation. Will God forgive those who weaken and doubt the revolutionary spirit?
Stressing the need for the meticulous implementation of the proposed national agenda for reforming the educational system, the Leader of the Islamic Revolution stated: The agenda for reforms in the education system opens the way for the educational system to reach to its destination. However, it is not enough to just communicate the agenda; rather, we need to make sure to implement it, so that the people involved in the education system will read it, understand it, and act upon it. This is a well-drawn document that needs following up.
Ayatollah Khamenei urged education officials to help the schools affected by massive floods in many provinces of the country so that they will not fall behind their educational plans and held: Do not let the students in flood-stricken regions fall behind their studies. Rebuilding schools has started. The charitable people who help in building schools—and are truly beneficial—will help too. The situation has to be managed in a way that while the schools are being rebuilt, these students do not fall behind in their studies.

The Supreme Leader reminded his audience of the enemies’ plots against the independent Iranian nation, asserting that: Today, the enemy is attacking us in every front. In the economic, politics, and intelligence fronts as well as in the cyberspace. This is not particular to the current US government. This person in power in the U.S. now [Trump] actually helps to expose the real face of the United States. Those before him followed the same policy, however, they wore velvet gloves over their iron hands. The current President of the US has taken off these gloves and everyone can see the iron fist hidden beneath.

Imam Khamenei advised the nation as well as government officials to be prepared and equipped in the face of these aggressions and held: Every one of the people and the officials must prepare themselves for this aggression and wherever they are, they must take responsibility and enter the battlefield.

His Eminence further added: In the face of this confrontation arrangement, the nation has to go into make a confrontation arrangement too, and the most important thing to do is to stay united. Everyone make sure not to confront one another for differences of opinion. Because the power of this nation and what gives this country sovereignty is unity.