In a meeting with academics

Ayatollah Khamenei : The deal of the Century won’t be realized 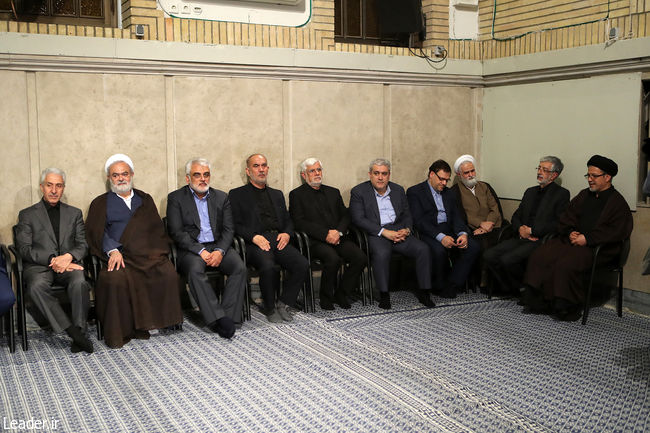 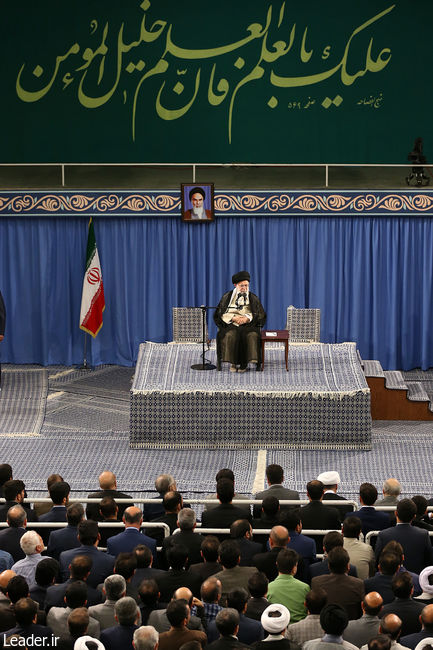 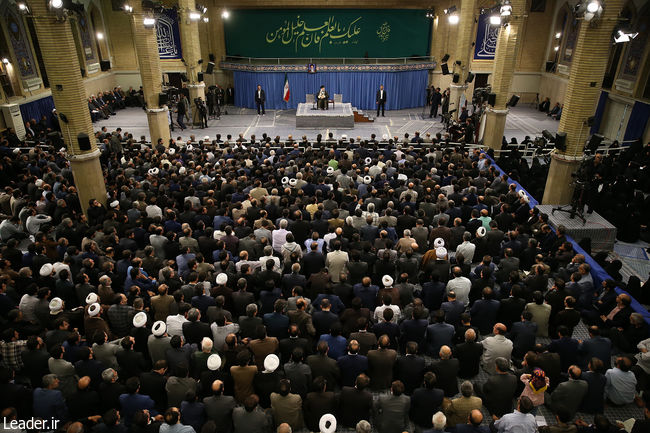 On the 23rd day of the auspicious month of Ramadan, a group of university professors, academic elites, and researchers met with Ayatollah Khamenei— the Leader of the Islamic Revolution— on May 29, 2019.
In this meeting, Ayatollah Khamenei referred to escalating pressures from the U.S. to bring Iran to back to the table of negotiations and stressed: By returning to the negotiation table, they mean we negotiate with the U.S. We will not negotiate with U.S. officials. Because there is no point negotiating and it is detrimental.
The Supreme Leader assured his audience that Iran welcomes negotiating with any other governments, and asserted: Otherwise we have no problems negotiating with others or with Europeans. In negotiating with others and with Europeans, our lives only concern is the issue to be negotiated.
Ayatollah Khamenei emphasized that the Islamic Republic will never trade its core values, and maintained: We will not negotiate on the core issues of the Revolution. Negotiations on this issue implies trading; that is, they mean we give up on our defensive capabilities. We will not negotiate our military capability.
The Supreme Leader described negotiations as a pretext the United States uses to pressure Iran and held: The U.S.’s tactic to enhance their strategy of pressuring Iran. They want to cash in on the pressures through negotiation.
His Eminence added: The U.S. targets assets of a country by pressuring it; to further their goal, they employ pressure" as a means. They also have a tactic and that is negotiation.
Ayatollah Khamenei elaborated on how the United Studies pressures nations into negotiating and trading their national assets, saying: They pressure until the adversary gets tired, and then propose to negotiate. This negotiation is complementary to the pressure and aims to cash in on the pressures. They pressure and then propose to negotiate. This is what negotiation means to them. Their strategy is not negotiation. It is pressure. Negotiation is part of the pressure strategy.
The Leader of the Islamic Revolution regarded resistance as the counter measure in face of pressures by the U.S. and held: The counter measure for us is to use our own means of pressures to contend their pressure. However, if we are deceived by their call for negotiations and consider our means of pressures unnecessary, we would slip and that equals absolute defeat.
Ayatollah Khamenei advised Iranian officials as well as the general public against giving in to pressures, and said: When you do not use your means of pressure, the enemy will relax and continue pressuring.

The Leader of the Islamic Revolution described Iran’s national points of strength as including nuclear science, asserting that: Our strength is in nuclear science and we are not after nuclear weapons either. Not because of the sanctions or the [pressures from] the United Studies, but because of our ideology that deems nuclear weapons forbidden from the point of view of Fiqh and religion.
Ayatollah Khamenei slammed those who consider producing nuclear weapons as method of deterrence and declared: Some have suggested producing but not using nuclear weapons. This is also wrong. We would spend a lot to produce them without using it and the enemy knows we would never use them. So they would be ineffective for us.
Addressing the issue of the senior National Security Council’s advice on where to hold enrichment levels, Ayatollah Khamenei maintained: For now the ruling made by the Supreme National Security Council will be implemented and for later whatever necessary. Stopping at current levels is meaningless. As for now, the resolution by the Supreme National Security Council will be executed. If needed, we will use our next tactics in the future.
His Eminence went on to say: The only way for us is to apply our tactics of pressure in face of the pressures that the U.S. applies. Contrary to their propaganda, these tactics are not military--though we might use military means if we find it necessary.
Ayatollah Khamenei added that Iran would not abide by part of its JCPOA commitments as a step predicted within the framework of the deal and said: What the Supreme National Security Council did by saying that we would not perform our commitments in this sector was appropriate.
The Leader of the Islamic Revolution went on to say: There is consensus among executive officials that negotiating with the United States is absolutely not advised. Not just negotiating with the current government; the Obama administration was not fundamentally different from the current government. It had a different appearance, but the same nature. We won’t be deceived by U.S. tricks.
Ayatollah Khamenei praised nation’s academic and scientific achievements, informing his audience of efforts to underestimate the country’s scientific movement and maintained: Our academic progresses have been truly significant. This should not be neglected. I insist that a trend has been launched to underestimate the country’s great scientific movement. They spent money and devise plans for that sake; an example is Stanford University’s 2040 blueprint to question our scientific works and progresses as well as important academic achievements. There are also people in Iran who pass the ball to them to score a goal [assist their efforts against Iran’s scientific movement]. This is a combination of treason and vice. Universities have carried out many great tasks and stand far above where they used to be before the Islamic Revolution.
His Eminence added: They accuse our academic community of shallowness and lacking enough knowledge. If they are shallow and lack knowledge, then who carried out the 20% uranium enrichment? Who accomplished the Nanotechnology developments? Who brought about the achievements in stem cells?
Ayatollah Khamenei stressed that despite all these accomplishment, the country is still far behind where it deserves to stand and reminded his audience that: Rightfully praising and taking pride in our universities does not mean that we are content with the current levels of progress and that our universities do not have flaws and defects. No! We are still behind. In a bitter era in history, our country fell behind the scientific trend due to our politicians’ misconducts. We are not standing where we deserve in the realm of sciences and in the Second Phase of the Revolution, we need to reach our highest point.
The Supreme Leader mentioned that Iran requires a major scientific momentum by saying: Our country does not need only a scientific progress but a scientific surge! And this is totally possible; it is very challenging, but sweetly so.
Highlighting the significance of this year’s Quds Day rally in the light of the escalated pressures by the Zionist regime against Palestine, Imam Khamenei asserted: This year’s Quds Day is more important than any other year. Of course, the issue of Palestine is a fundamental issue and it is not particular to Islamic governments and nations. The issue of Palestine is a humanitarian issue. Certainly, it is of more significance and of higher priority for Muslims as besides humanitarian aspects, it also includes religious concerns.
His Eminence described Quds Day rallies as particularly important this year because of acts of treasons by certain states in the region and said: The Quds Day rally which represents supporting Palestine by public turnout has always been important. It is more important this year because of the treasonous acts by come U.S. cohorts in the region who try to make the ‘Deal of the Century’ accepted. Of course, it will not be accepted and it will never be realized; the United States and its cohorts will certainly face failure on this matter.
Finally the Supreme Leader once again reassured his audience that the Zionist plot is doomed to failure and held: They are acting differently as compared to the past only in that now they openly declare they want to wipe the issue of Palestine form the issues of the world. For sure they will not be able to do so and they will face a failure.