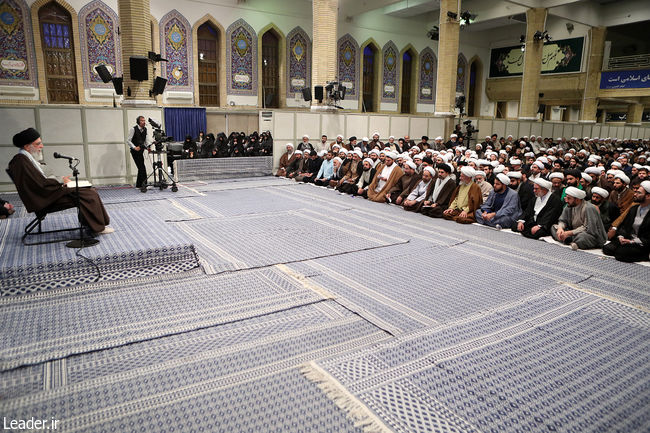 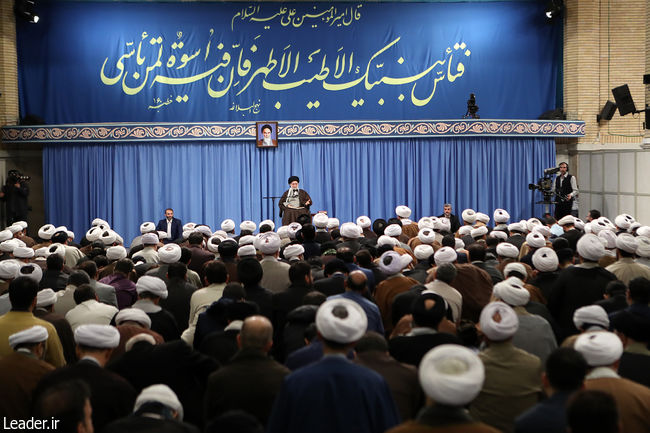 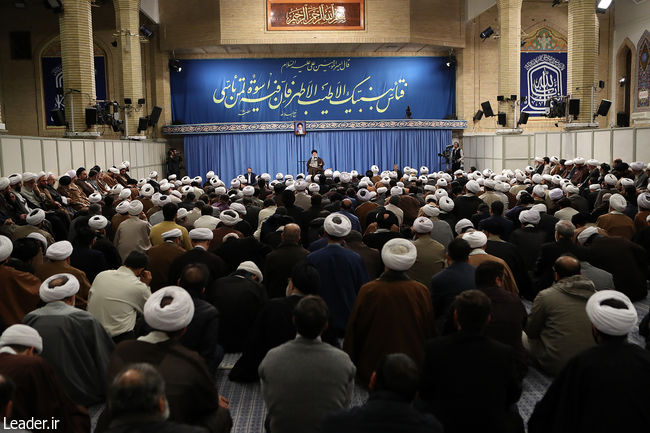 The following is an excerpt of the remarks delivered at the beginning of Dars-e Kharej on November 17, 2019, by Ayatollah Khamenei, Supreme Leader of the Islamic Revolution, on the recent incidents following the energy consumption management policy adopted by the heads of the three branches of government.
In the Name of Allah, the Beneficent, the Merciful
All praise is due to Allah, the Lord of the Worlds, and peace and greetings be upon our Master Muhammad, and upon his pure household, and may God curse all their enemies
Before I begin my statements, I wish to say that in the past one, two days, certain incidents took place following the policy adopted by the heads of the three branches. Yesterday, last night and the night before that, certain problems unfortunately arose in some cities of the country. Some individuals lost their lives and some places were damaged. Such things have happened in the past one, two days. There are a number of points which should receive attention: first of all, when a policy is adopted by the heads of the country, one should view it with optimism. I am not an expert in this regard. I do not have the expertise and I said so to the honorable gentlemen. I said to them that because experts give different opinions on the issue of gasoline – some experts find it necessary and essential and some find it detrimental – I prefer not giving my opinion because I am not an expert on such matters.
I also said that although I am not an expert, if the heads of the three branches of government decide to press ahead with it, I will support it. I said this and I will support them. They are the heads of the three branches of government and they made a decision based on expert opinion. Therefore, this decision should be acted on. This is one point.
The second point is that some people are certainly worried or upset about this decision. They find it to their disadvantage or they think it is to their disadvantage. In any case, they become displeased, but setting fire to such and such a bank is not the action of the people, rather it is the action of thugs. It is done by thugs. They are done by hooligans and we should pay attention to this. In such incidents, hooligans, those with malicious intentions and thugs enter the arena and sometimes, youth accompany them because they get carried away, thus bringing about such acts of sabotage. These acts of sabotage do not solve any problem. In fact, it adds insecurity to any possible problem. Insecurity is the worst disaster for every country and every society. This is what their intention is. Notice that in the past two days – in the past two nights and one day since these incidents took place – all malicious centers in the world, which work against us, have encouraged these actions. These centers – ranging from the sinister and malicious Pahlavi household to evil and criminal munafeqeen terrorist cult – are constantly encouraging such actions in social networks and via other outlets.
They encourage individuals to continue making malicious moves. What I want to say is that no one should help thugs. No wise and sensible individual who is interested in their country and in their comfortable life should help them because they are thugs. Such actions are not carried out by ordinary people.
Of course, officials should also pay attention and decrease the problems associated as much as they can. Yesterday, I saw a number of honorable officials on TV saying that they are careful not to let this increase in the price of gasoline lead to an increase in the price of other goods and products. Well, this is important because in the present time, things are expensive and if this problem of high prices is aggravated, this will create many problems for the people. They should be careful. They should adopt the necessary measures.
The officials in charge of ensuring the security of the country should carry out their duties as well. As for our dear people, they have fortunately shown their insight and vigilance on different matters and they should know who brings about these bitter incidents and where they come from. They should know who starts such acts of burning, sabotaging, destroying, fighting and creating insecurity and they should be vigilant. Of course, the people are already vigilant and well-informed. And they should stay away from those individuals. This is my word of advice. The officials of the country should carry out their duties in a serious way as well.
After all, when a decision is made by the heads of the three branches, this is not about the government and a certain ministry, rather it is about a decision made by the heads of the three branches. And they made that decision based on expert opinion. I said that I am not an expert on this matter, but I am saying this as a person who sees that this decision has been made by the officials of the country. It was the same during the time of Imam (may God bestow paradise on him) as well. At that time too, certain measures would be adopted and implemented by officials and the heads of the three branches. It is the same in the present time as well.
I hope that with the help of the people, with the cooperation, diligence and persistence of officials and with divine grace, this task will be accomplished in the best way possible, God willing.