In a meeting with Air Force commanders and officers:

The Leader: Economy’s dependence on oil should be stopped 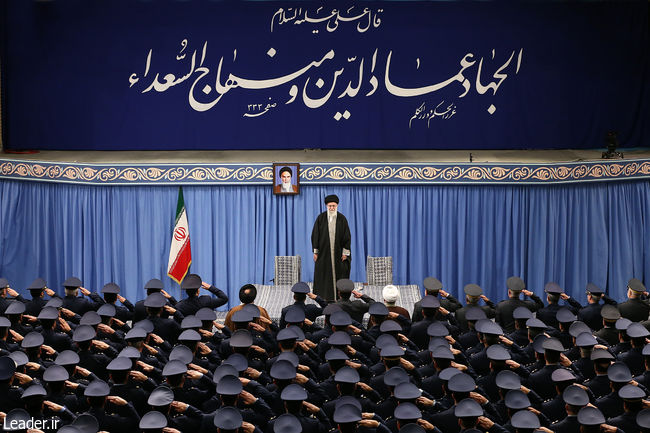 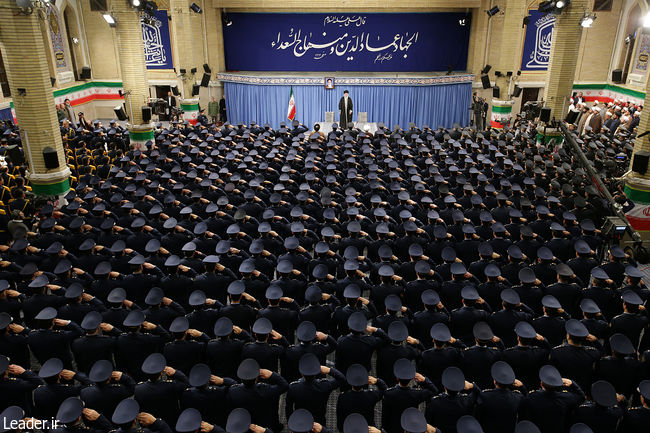 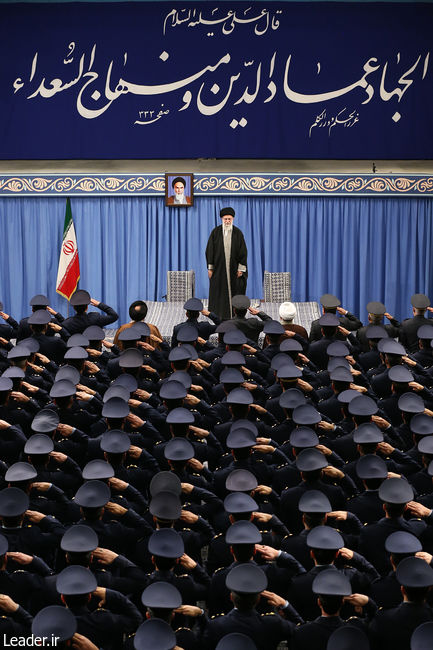 Celebrating the Ten-Day Dawn Celebrations, which mark the anniversary of the victory of the Islamic Revolution, and on the anniversary of the Air Force commanders’ historical pledging allegiance to Imam Khomeini on February 8, 1979 (known as the Homafaran Allegiance), a group of commanders, pilots and staff of the Air Force met with Imam Khamenei on Saturday, February 8, 2020.
In this meeting, the Supreme Leader hailed the Air Force’s historical pledging allegiance with Imam Khomeini on the crucial days leading to the victory of the Islamic Revolution in Iran and stated, “During the rule of the Pahlavi regime, the Air Force was one of the closest forces to the power center, the royal family and the United States. We should take lessons from this.”
Imam Khamenei referred to a verse from the Qur’an where God speaks of helping the Muslims against their enemies, the Jews of Banu Nadir, and said, “The first lesson that is good to consider is that the tyrannical (Pahlavi) regime was struck a blow from where it never expected. As God, the Almighty states about the Jews of Banu Nadir in the Holy Qur’an, “But Allah came upon them from where they did not expect.” [Qur’an 59:2]
His Eminence elaborated on how the Air Force staff and commanders supported the Revolution against the Pahlavi regime, which the U.S. had installed, and stated, “The Air Force, despite its commanders who were so dependent and the particular circumstances that it always had at that time - its close ties with the American administrators, academies, and the like - suddenly acted in favor of the Revolution at the most sensitive time. Their first action of this kind was on February 8, 1979, when the Air Force members met with Imam Khomeini and pledged allegiance to him. The next measure they took was resistance in confronting another division of the Army that had attacked them.
The Leader of the Islamic Revolution explained, “The first point is that God, the Almighty, came upon them from where they did not expect. This is one side of the matter. On the other side, the believers were empowered from where they did not expect. In our Islamic terminology, culture and literature, this is called ‘unexpected provisions.’”
His Eminence further went on to say, “A group of believers, a believing Air Force who trusted in God, turned threats into opportunities with their strong willpower.”
Praising the growing capabilities of the Air Force after Iran became independent in 1979, Imam Khamenei stated, “Now, they are reporting that they have repaired a large number of fighter planes and passenger planes, overhauled and built a number of them. When did this become possible for our Air Force? When we stopped relying on foreigners. They threatened us, said they would not sell to us, and said they would not let us (advance).”
The Supreme Leader referred to the plundering of Iran’s military equipment by the United States and declared, “Military equipment belonging to us is still in the warehouses of U.S. military corporations. That is, they have not yet been given to us. We do not know what they have done with them. Ironically, we were even asked for warehousing charges a few years ago. Equipment they had been paid for, they refused to give to us. However, what is the outcome? The outcome is that our Air Force, which did not have the right to repair a single part of a fighter plane or an aircraft during the Pahlavi regime, is now producing the entire aircraft today. That is, our Air Force transformed threats into opportunities, turned danger into profit. This is the virtue of a society of believers.”
Imam Khamenei dubbed the U.S. and international sanctions imposed on Iran as criminal acts and emphasized, “Sanctions have been imposed on us since the beginning of the Revolution, and the sanctions have intensified over the last few years. They themselves boast that they have imposed the most severe sanctions against the Islamic Republic. Imposing sanctions is literally a crime. That is, it is a major threat, which is condemned by public opinion around the world because it is not about just the U.S. imposing sanctions on Iran. Rather, it is about the U.S. coercing others to enforce sanctions against Iran too.
These sanctions can function as an opportunity, in the same way, that they have already provided us with many opportunities. They can also bring about a great opportunity for us in the future. If we, the officials, act astutely, it can save the nation's economy from relying on oil. The economy’s dependence on oil should be stopped.”
The Leader of the Islamic Revolution stated that reliance on oil is a major hindrance to Iran’s economy and concluded, “The major factor causing our economic problems is dependence on oil, which has led to not paying much attention to the domestic potential inside the country for generating revenue. As a result, we have been mistakenly assuming that the country’s expenses will be met by exporting oil.”
In the end, the Supreme Leader added, “I saw in reports that they (in the West) recommend preventing Iran from achieving a non-oil economy. Among themselves, it is said that they should not let Iran experience a non-oil economy. (They recommend that they should) develop a secret means - if they don’t want to remove the sanctions - to find a way to prevent Iran from becoming completely independent (of oil exports); because, if Iran becomes independent, it will develop a non-oil economy.”