In a meeting with a group of eulogists: 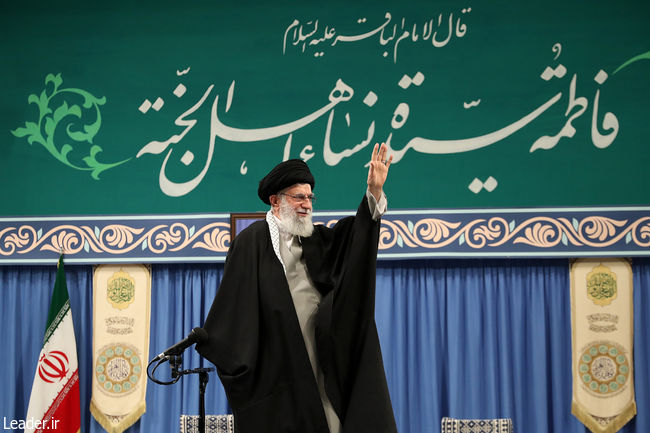 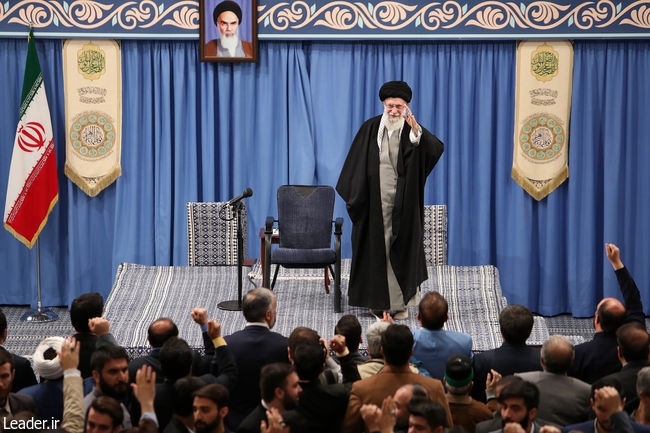 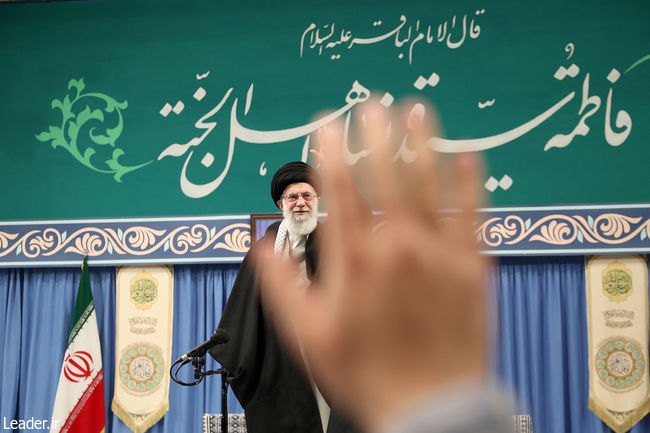 On the auspicious occasion of the anniversary of the birth of Lady Fatimah Zahra (pbuh), the daughter of the Prophet of Islam, a group of religious eulogists met with the Supreme Leader of the Islamic Revolution – Seyyed Ali Khamenei – on Saturday, February 15, 2020.
In this meeting, Ayatollah Khamenei stressed the significance of the eulogists’ role in the society’s sorrow and happiness by stating, “The community of eulogists has an important responsibility, which includes the management of the society’s happiness and sorrow. Those societies, which lack similar religious ceremonies and these occasions for mourning or celebrating feel a lack. They seek to somehow fill this lack, but in vain. This is a task to be carried out by you.”
The Supreme Leader pointed to the historical inception of religious mourning ceremonies following the martyrdom of Imam Hussain, the third Shiaa Iman (pbuh) and his companions and stated, “After the event of Karbala, organizing ceremonies for expressing sorrow over the loss of the martyrs and the Imams (pbut) became widespread. Such events were promoted, and as a result, they still exist today.”
He emphasized that weeping is not a sign of spiritual weakness and held, “Contrary to what some imagined - at a certain point in history some tended to believe that crying and expressing sorrow is a sign of weakness - crying in mourning ceremonies for martyrs is not a sign of weakness. Rather, it is a sign of volition, determination, and an expression of the highest emotions of a person in the middle of the field of action.”
The Leader of the Islamic Revolution added, “Mourning ceremonies for martyrs are the same today. Today, the funerals for the martyrs, mourning ceremonies for the martyrs and repeating the names of the martyrs are mourning and involve crying, but they are also a means for feeling dignified, powerful and courageous.”
Ayatollah Khamenei referred to the massive turnouts for the funerals of Martyr General Qasem Soliemani held across the nation and explained, “During the recent funerals of our dear martyr, look at what happened across the country. Not only in Iran but also outside Iran, the funerals of the dear martyrs - Martyr Soleimani, Abu Mahdi al-Muhandis and others - created an enormous event! This is what it means to orient and direct the mourning ceremonies. That is, you should orient the mourning ceremonies in the direction, which is endorsed by the Household of the Prophet (pbut) and needed by society.”
Referring to the soft war, which Iran has been engaged in with the enemies, the Supreme Leader urged the youth to arm themselves with the proper tools for this soft war and affirmed, “The important need of our country today is for our youth to be equipped with a variety of soft weapons, the tools for soft warfare, which are spiritual and intellectual power. I have repeatedly spoken about the country becoming stronger. One of the most important and decisive elements in strengthening the country is for us to arm our youth with the right mindset, which may be found in abundance in the teachings of Lady Fatimah (pbuh) and the Household of the Prophet (pbut).”
He described the young generation as being the ones in whose hands the future of the nation lies and added, “The young generation, in whom we have placed our hopes - because the future of this country is in the hands of the youth and hope is with the youth - should know firmly, determinedly and insightfully what they want to do, where they want to go and how to get there. Therefore, they need the teachings of the Household of the Prophet (pbut), which is the weapon for bringing immunity to the Islamic society and system, to Islam and to the Muslims. Hence, we need to revive the teachings of the Household of the Prophet (pbut).”

The Leader of the Islamic Revolution further advised the eulogists to responsibly carry out the task they have been assigned by saying, “And, I would like to tell you dear brothers, who have formed a community of eulogists, that this responsibility is an important responsibility. If we do not perform the responsibility of leading in the way that I have explained, we are responsible before God, the Almighty. When we have a duty, we must perform that duty; otherwise, the Almighty God will be angry with us.”

He highlighted the importance of commemorating the Household of the Prophet (pbut) and following their model, saying, “If the teachings of the Household of the Prophet are conveyed in the gatherings for eulogies, the mourning assemblies, and such places, this will be an inexhaustible reserve. As you can see today, your country and your society are enduring strongly in an amazing way under the various pressures because we read, see, and hear their (the AhlulBayt's) words.”
Praising the resistance of the Iranian nation against all sanctions and pressures, Ayatollah Khamenei said, “The strong endurance of the Iranian nation is amazing to international observers; they are astonished. One fifth, or one fourth, of the pressure exerted by this aggressive monster - the U.S. - would not be tolerable to other nations; however, the Iranian nation is standing strong.”
The Supreme Leader described the massive turnouts for the funeral of Martyr Soleimani as well as for the rallies on the anniversary of the victory of the Islamic Revolution as abundant blessings due to following the example of the AhlulBayt (pbut) and said, “These rallies for the 22nd of Bahman, and the funeral for the heavenly Commander before that, have made everyone wonder at what a resistant nation this is. This is due to the teachings of the Household of the Prophet (pbuh), to the blessings of these assemblies and gatherings, to the blessings of the name and memory of Imam Hussain (pbuh), and to the blessings of the name and memory of Lady Fatimah (pbuh).”

Ayatollah Khamenei hailed the Iranian nation’s spirit of heroism and resistance, and he pointed out, “All praise is due to God that a heroic spirit of epic participation is alive in our country. Wherever a need for an epic presence and enthusiastic involvement of the people was felt, people entered the arena with that truly epic presence and zeal. This zeal, spirituality and feeling should become deeper, especially among young people. It should be established in the minds as a complete culture. This is possible by cultivating this culture. And, that is your task, the task of the community of eulogists.”
He thanked God for the great blessings He has bestowed upon Iran and said, “Praise be to God, the Islamic government, the Islamic community and the Islamic Republic are blessed with all the necessary elements. They have good military commanders, motivated young scientists, diligent and zealous cultural activists, very good artists and people who are ready-to-act in all areas. Wherever Islam, the Islamic government, and the Islamic system has a need, there are men and women ready to participate. So, as I actually see it, the ultimate victory over the massive front of the enemies belongs to the Iranian nation.”

Elsewhere in his speech, Ayatollah Khamenei urged eulogists to address the issue of lifestyle in their eulogies and ceremonies in order to promote a culture endorsed by the teachings of Islam stating that, “One thing that should be pursued in these assemblies, with God’s grace, is the matter of Islamic lifestyle. This should be decorated with the art of poetry, and these poems should be recited in gatherings to promote this culture. If we want to change the lifestyle into the Islamic lifestyle in the correct manner and in opposition to the (cultural) invasion of the enemy front, this is the solution. You read in the supplication, ‘O’ God! Make me live the life of Muhammad and the Household of Muhammad, and permit me to die the death of Muhammad and the Household of Muhammad.’ When we talk of ‘live the life of’ here, we mean lifestyle and we are asking God to make our lifestyle like theirs.”

Finally the Supreme Leader emphasized Lady Fatimah Zahra’s (pbuh) spirit of altruism as an excellent example to follow and maintained, “Another part of the teachings of Fatimah (pbuh) is the issue of helping others. When her son asked, ‘Mother, why did you only pray for others?’ Her answer was, ‘First the neighbor, then ourselves.’ This is a lesson to remind us of social responsibility. Another example is that of (helping) the poor, orphaned and the captive as referred to in the chapter ‘The Man.’ The Almighty God mentions this incident with magnificence, and seventeen or eighteen verses are dedicated to it. This shows the significance of this incident. It is a symbolic event. Yes, these honorable individuals and all the members of their family endured hunger. They helped the orphan, the poor, and the captive. This actually happened, but it is also symbolic. Lady Fatimah (pbuh) could have asked them to go to the Mosque instead. It was in an Islamic government after all. However, the government’s duty does not remove society’s duty. People in a society are required to truly help one another. Various types of assistance should be offered in society: financial assistance, help in thinking, protecting the honor of others, etc. This is a lesson from Lady Fatimah’s teachings.”